WW1 education and commemoration efforts reach from France to California

Vincent Bervas, professor of History and French and president of the Association of History Teachers and Geography for the Aisne territory in France, hosts a teaching program for young people. The focus is on educating students about World War I and includes a variety of unique activities. 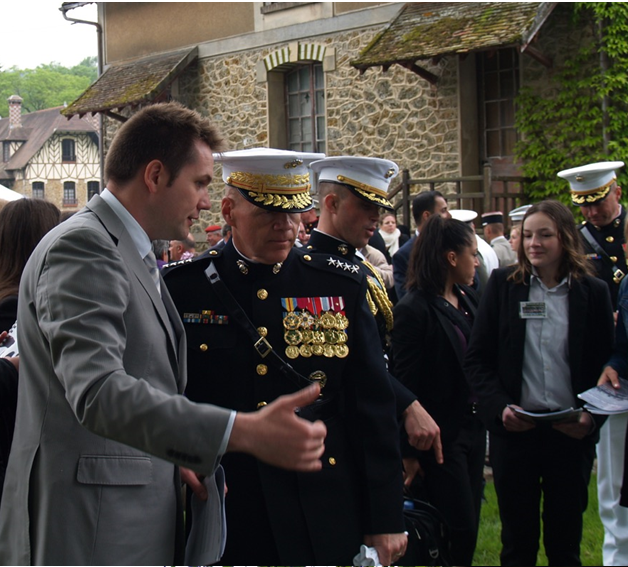 Vincent Bervas (left) discusses aspects of his students' project at Belleau Wood with General Robert B. Neller, 37th Commandant of the United States Marine Corps.Bervas is a resident of Château-Thierry, a city rich with history tied to the Great War. The city was on the front lines of the war and was the scene of significant events. Bervas serves as a member on the Centennial Château-Thierry committee, and is actively engaged in sharing the history of the region with young people.

The students are youth who face certain difficulties and otherwise would not have the opportunity to participate in the unique programming Bervas hosts.

“The centenary of the Great War is a great opportunity for them to better know their region and its history,” explained Bervas. “It is also an opportunity to create beautiful projects with them.”

In 2013, he created a project, depths of field, focused on the photography technique of the same name. The students were able to develop a show in which they read letters, documents and also extracts from the Company K battalion, for example. To prepare for this show, the students visited many historical places. This project also included a plenoptics photography project where students took photos at Belleau Wood and Fort Condé.

Students have also produced a final show that took place in the battlefield at the Caverne du Dragon followed by a presentation at school attended by key representatives from the French Centennial Commission. These hands-on lessons offer an opportunity to actively engage in the history in the young people’s own backyards.

Beyond the lessons Bervas offers, he is an active volunteer at the centennial committee in his city. Most notably, last November, the committee created a trench where youth came for a part of the night to live like soldiers. They received more than 2,000 people at the exhibition which lasted 15 days. It included an evening vigil to commemorate. 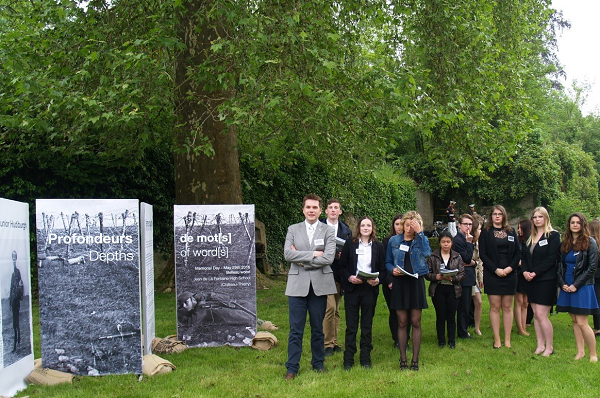 Vincent Bervas (left) and his students near a portion of the plenoptics photography project.In 2016, Bervas has led a new writing project with students that will was presented for the first time in a Memorial Day commemoration. The writing technique involved new software that allows students to write together and collaborate in a forum.

In addition to serving as a professor, Bervas works with WW1CC volunteer, Courtland Jindra. The two, as historians, complement each other’s investigations into World War I history, with Jindra researching in Los Angeles and elsewhere in the United States. Through the joint efforts they have found many interesting ties between Los Angeles and Château-Thierry.

“With Courtland, I learned many things. A bronze statue that was in a villa in Château-Thierry had been bought by a Beverly Hills businessman...Courtland also taught me a neighborhood of Long Beach is named Château-Thierry.”

Bervas brings the history of the Great War directly to students in France and works in close collaboration to research the special links to the United States. For 2017, he is dedicated to putting the United States in the spotlight as the centennial approaches. Efforts like those of Bervas complement the efforts that the WW1CC is undertaking in honoring the centennial across the U.S.