By Katherine Blood
Prints and Photographs Division, Library of Congress 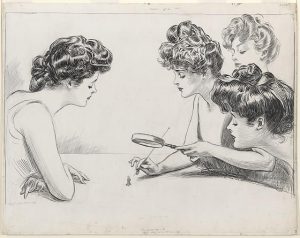 "The Weaker Sex" by Charles Dana GibsonIllustrator Charles Dana Gibson was already a celebrity when tapped in April 1917 to lead the federal government’s Division of Pictorial Publicity — an arm of Woodrow Wilson’s Committee on Public Information. He was enlisted by Committee head George Creel, who believed that visual art could provide a unique service in winning the hearts and minds of the American public. And not just any art — nothing less than the best art by the best artists was sought to bolster recruitment, fundraising, service by women and civilians and troop support in myriad forms including contributions for camp libraries. When Gibson famously urged fellow artists to “Draw ‘till it hurts!” in support of America’s war effort, he was addressing such luminaries as James Montgomery Flagg, Howard Chandler Christy and Edward Penfield, to name just a few of the division’s more than 300 participants.

Among Gibson’s most enduring creations was the iconic Gibson Girl, who began appearing in the 1890s. She embodied the “New Woman” who was active and independent, intelligent and beautiful. But a very different kind of Gibson woman commanded my attention when I had the chance to co-curate the exhibition “World War I: American Artists View the Great War” with my colleague Sara W. Duke. In a vivid satire called “And the Fool, He Called Her His Lady Fair,” Gibson presents war as a woman who is an unsettling hybrid of menace and allure, the seeming antithesis of the fresh, youthful and wholesome Gibson Girl ideal.