By Nancy Coltun Webster
via the Chicago Post-Tribune, September 2, 2016 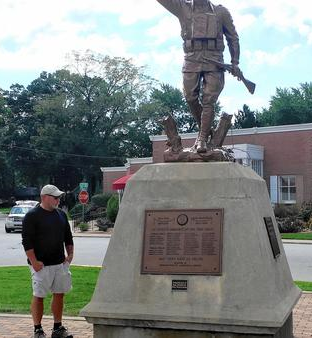 For as long as most of Hobart residents can remember, the "Doughboy" has kept watch on the city from his pedestal at the intersection of Lincoln Avenue, 7th Street and Main Street. A grim reminder of war, he stands with a rifle in his left hand and a grenade ready to toss with his left. Plaques memorialize those who gave their lives in the two world wars, Korea, Vietnam and the Global War on Terrorism.

The pressed copper statue was originally dedicated at 11 a.m. on the nation's seventh Armistice Day, Wednesday, Nov. 11, 1925, reported the Nov. 13, 1925, Hobart Gazette provided by Rita McBride of the Hobart Historical Society. According to The Gazette, the dedication was "witnessed by one of the largest crowds ever assembled in our city." Two American Legion Post 54 members on horseback followed by the school band and 1,000 schoolchildren marched to the intersection as the event got underway.

The 1925 Armistice Day was a significant celebration in Lake County. The time of day was important, because that was reported to be the time the last shot of World War I was fired.