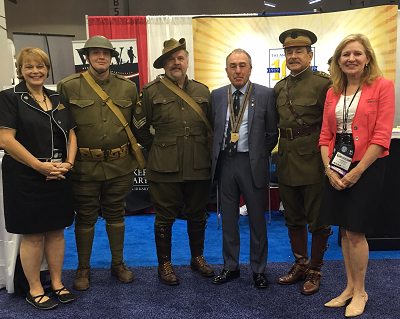 In support of the American Legion Centennial’s commemoration activities, the Legion endorsed the 100 Cities / 100 Memorials initiative through executive resolution earlier this summer. As a supporting organization, the American Legion joins, the WW1CC, PMML, who are awarding $200,000 in matching grants to help rescue and restore WWI memorials throughout the nation. The Legion is eager to participate and identify their local posts’ histories and WW1 origins. 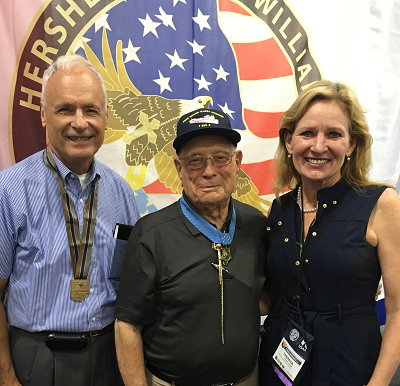 (L to R): Commissioner Tom Moe, Legionnaire Hershel Woodrow “Woody” Williams, and Theresa Sims, Director of Veterans and Military Partnerships. Hershel Woodrow "Woody" Williams is a retired United States Marine who received the Medal of Honor for his actions in the Battle of Iwo Jima during World War II.

When asked about his experience at the convention, Dan Dayton commented, “As a Legionnaire I was especially honored to be asked to the meeting as we plan for the Centennial of WWI in concert with our American Legion partners. They are truly a GREAT group of Americans.”

PMML WWI Centennial Project Manager, Susan Mennenga stated, “I was honored and glad to share the information about the 100Cities/100 Memorials project to members of the American Legion. The PMML leadership takes great pride in having forged a national effort to preserve our WWI Monuments.”

The Commission and PMML look forward to working together with the American Legion family to commemorate, educate, and honor the courage of the 4.7 million veterans who answered the call to serve and the 116,516 who gave their lives for our great Nation.