"The WW1 generation deserve to be remembered"

Chris Garcia is an Iraq War Vet who now works as a Education Coordinator at Virginia War Museum in Newport News, VA. He is also a leader in the World War I reenacting community, acting as the Sergeant Major to the Great War Association, which organizes the largest World War I reenactment events in the United States every year in Newville PA.

You are a Museum Education Coordinator and historian. Tell us about your career, and your interest in WWI. 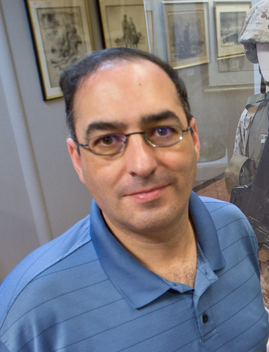 Chris GarciaI started my career at the Virginia War Museum in April of 2008 as the Museum's Education Coordinator, where I am responsible for developing and supervising all of the Museum's Education and Youth programs, teaching Military History for everyone from elementary school children, to post-graduate military professional instruction.

Prior to the War Museum, I was in the Navy for nine years and participated in multiple combat operations in the Balkans and Iraq. I earned my BA in history in 1993 and my MA in history in 2012.

I have had a lifelong interest in WWI. As a child I remember meeting WWI Veterans. I also grew up watching "The Fighting Sixty-Ninth" with my Grandfather (who attended the premier in NY in 1940!). What really primed me was finding an article during the 1970's in one of my Dad's strategy magazines (Strategy & Tactics) about the GWA (Yes it has been around that long!) and re-enacting WWI. I thought to myself "No this is what I really want to do!" I really became addicted to WWI when I acquired an original copy of "Father Duffy's Story." It was further fueled after I started collecting WWI Manuals as a college Student in Boston (which at the time could be had for pennies).

I continued my studies and in Graduate School one of my projects was researching an officer in the 10th FA (3rd Division) who commanded a 75mm Accompanying gun during the Argonne Campaign. I have since been heavily involved in digitizing the Museum's Virginia WWI holdings.

Your museum is small, but has remarkable holdings regarding WWI. Tell us about these holdings, public programs, and exhibits.

The Virginia War Museum (formerly The War Memorial Museum of Virginia) has its origins in the First World War. It was formed in 1923 by the Braxton-Perkins post of the American Legion as a repository for their collection. The Museum was ceded to the the City of Newport News in the 1950's. WWI is the heart of the Museum's collection. The very ground it is built upon was an army camp that was part of the Hampton Roads Port of Embarkation during the war. 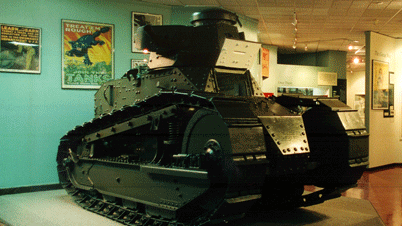 A restored Model 1917 US Tank at the Virginia War MuseumWe have uniforms and memorabilia from almost every division that served in the war, as well as a very large aviation collection. We also have an extensive archives of letters, diaries and other manuscript sources.

Some of our more significant WWI artifacts are:

We have a number of programs. Our regular World War One program is our most requested school program, where we look at WWI and the soldiers who fought in the war. We also this year launched a new program "There and Back again – the 111th Field Artillery 1916-1919." This program is completely based upon artifact and archival holdings we have on the 111th, which was the local National Guard Unit and one of only two regiments the Virginia National Guard provided during the war.

During vacations we also conduct Children's WWI War Game Camps, to educate children about the First World War. We have had camps covering The Gallipoli Campaign, the 1916 Easter Rebellion and Verdun to date. They are extrememly popular and usually fill up very quickly!

You are also very active with living history and reenactment. Tell us about that effort.

I have been re-enacting for almost 25 years. I started in Civil War, but soon found my love, WWI. I started in the 67th Co, 5th Marines USMC, drawn to the fact that at the time they were one of the few units portraying a specific Company and Regiment, when most American units were portraying "Generic Doughboys." In 2009 I volunteered to become the GWA Registrar administering the registration process. 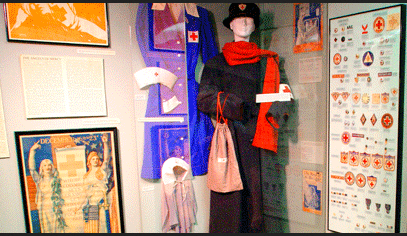 WW1 uniforms and insignia at the Virginia War Museum.After 10 years with the 67th, I left to become the founding unit commander of the 78th Co, 6th Marines. Shortly after I was promoted to 1st Sergeant of the AEF Company in the GWA. In 2012 I was elected as Treasurer of the Great War Association and am the first treasurer to be elected for three terms. The same year I was Promoted to Allied Regimental Sergeant Major. In 2015 I left the 78th to follow my dream of forming Headquarters Company, 165th Infantry, the first time in GWA History a 42nd Division unit had been formed.

The GWA is such a fantastic organization. What I do is really a labor of love. It's a lot of work, but when everyone has a great event, you are on such a high!

Why is it important to remember WWI? Why should we create a new memorial to this war?

Remembering WWI is vital. The First World War was the most important event in modern history since the Thirty Years War in 1648. The world as we know it today was born in the war and we are still picking up the pieces from the mess it caused. It is also a watershed moment in American history.

We started the war with a small constabulary military. We had notions and doctrines based on our limited experience and we paid a very heavy price for it. We learned that our doctrine and ideas did not work and in a rare bit of insight for a "victor" we examined our experience to the core and resolved to find a better way to not repeat our flawed victory.

The popular press likes to call the WWII generation "the greatest generation." I personally find that demeaning to veterans of all other conflicts. The 18 year old draftee didn't win WWII it was the WWI veterans who resolved to ensure there would be no repeat of their failures. Firepower replaced moral force and the bayonet, Motorization replaced the Horse, Boot camp and a basic level of training for all replaced the recruit squad and the mobilization camp. At Armistice Day there were more Americans in the line than all of the British and British Empire on the western front, yet we had no say in the conduct of the war or the peace. The bittersweet victory of WWI ensured the total victory of WWII. The WWI generation has long been overshadowed by the WWII generation. They deserve to be remembered, the Republic owes them that.