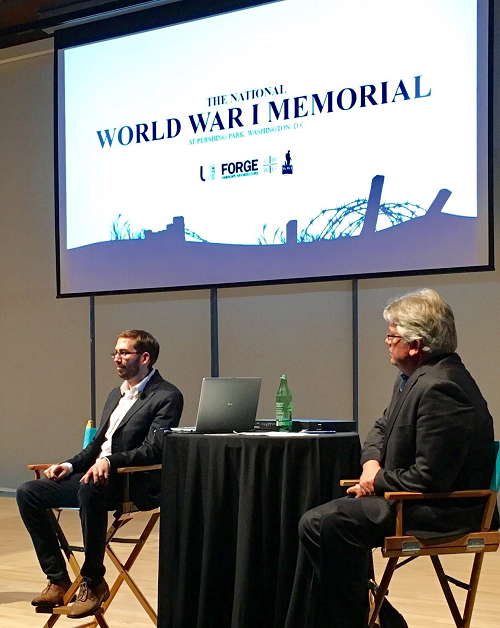 World War One Memorial designer, Joe Weishaar (L), was hosted this past week by the Crystal Bridges Museum of American Art, in Bentonville Arkansas, as part of their Spotlight Talk series. He discussed his work, the Memorial, and WW1.Joe Weishaar, concept designer of the National World War I Memorial at Pershing Park, was invited to his home state of Arkansas the first week of October, to be a guest speaker at the Crystal Bridges Museum of American Art’s Spotlight Talk series. He was joined onstage by Dean of the University of Arkansas Fay School of Architecture, Peter Mackeith. Together, they talked about the the school, the Commission, and the new World War One Memorial.

While there, Joe was was also able to connect with his former elementary school teacher, Vanessa Seward, and he visited her classroom to talk to her students. Ms. Seward has been a supporter of the new World War I Memorial, and recently wrote an Op Ed piece in favor of the memorial that ran in the Arkansas Democrat Gazette, and can be found here.

The WW1CC’s Chief Development Officer, Roger Fisk, joined Joe on the trip, to help tell people about the new memorial. Together, they met with business community leaders, and they also appeared on a radio talk show for the local NPR affiliate, KUAF Public Radio 91.3 FM, discussing the Centennial Commission’s efforts. 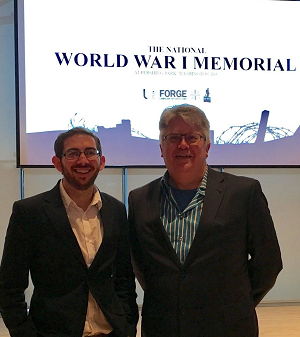 Joe Weishaar (left) with the Dean of the University of Arkansas Fay Jones School, Peter Mackeith. 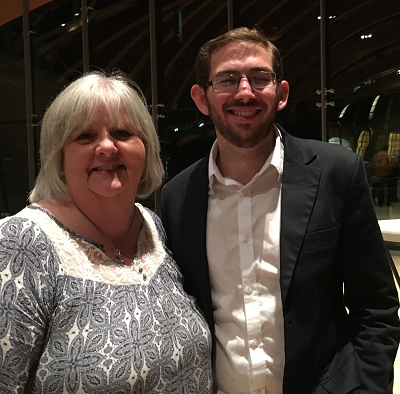