"So many compelling personal stories for visitors to discover"

Robert Cozzolino is Exhibition Curator for the upcoming Pennsylvania Academy of the Fine Arts art exhibit on World War One, entitled "World War I and American Art".

Tell us a little about the upcoming PAFA exhibit on World War I. 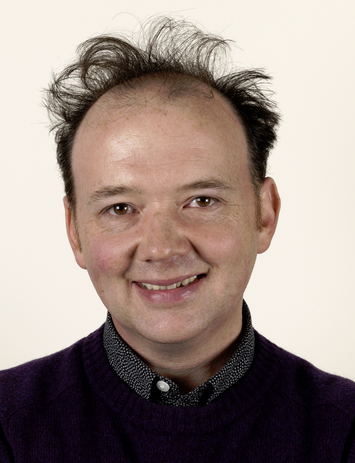 Robert CozzolinoThe exhibition is the first to examine the rich and varied relationship American artists had with the war. It examines the responses by artists working in a wide range of materials to the war from beginning to end and in the years immediately afterward. There are also two artists included who are working today and who have found World War I to be a compelling subject that relates to the current cultural climate -- Mary Reid Kelley and Debra Priestly.

The exhibition includes works by well-known artists whose wartime work has been discussed before: George Bellows, Marsden Hartley, Childe Hassam, and Horace Pippin. One of the highlights is that the Imperial War Museum has generously agreed to lend John Singer Sargent's monumental painting "Gassed" -- a painting that has rarely been seen in the U.S.

But the show's most significant contribution is presenting artwork contemporary with the war that has not previously been considered in this context. For instance, modernists such as John Marin and Georgia O'Keeffe made abstractions that on further consideration are direct responses to war imagery. Artists who are relative unknowns will also shine in this exhibition. Claggett Wilson, who fought in some of the bloodiest American battles of the war, left behind an extraordinary group of watercolors about his first-hand war experience. I think they will be the great discovery of the project.

The exhibition was deliberately timed to coincide with the centenary of the U.S. entering the war. As far as I know it is one of very few projects of this scale anywhere in the U.S. to focus on the war. We have also published a catalogue, which includes many essays and images.

The pieces are amazing -- and from highly varied sources. How did this exhibit come about, and ultimately come together? 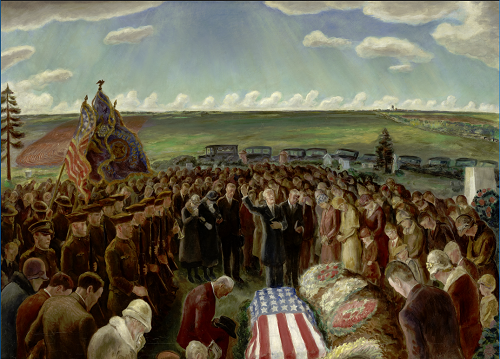 John Steuart Curry (1897–1946): The Return of Private Davis from the Argonne, 1928–40, Oil on canvasThe exhibition is a collaboration between Anne Knutson (an independent art historian), David Lubin (a professor at Wake Forest University), and I. Each of us had been working on this topic independently for many years. We were introduced by colleagues and decided to join forces. It has been in the works since 2009. An exhibition of this scale requires great institutional commitment, which we had at PAFA, and extensive fundraising.

We were fortunate to be awarded major grants from the National Endowment for the Humanities and the Henry Luce Foundation to help get the ball rolling. Other generous funders followed. 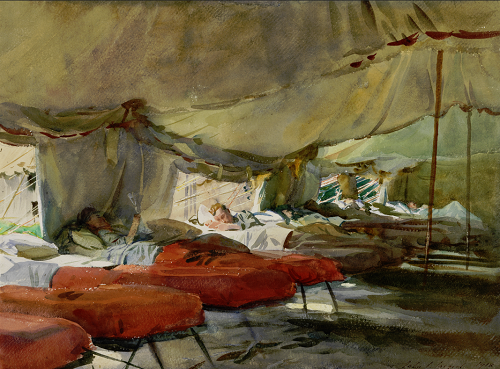 John Singer Sargent (1856–1925): The Interior of a Hospital Tent, 1918, Watercolor on paperIt was our collective feeling that this topic had been overlooked for too long by our field of American art history. The popular wisdom has been that the war had little impact on artistic practice in the U.S. My feeling now after digging deep into the period is that it had a bigger and more widespread impact than the famous "Armory Show" which is what dominates histories of the 1910s in the U.S.

You uncovered many untold stories about American Art in this exhibit. Do you have a favorite piece, or a favorite story, from the exhibit?

I think that there are so many compelling personal stories for visitors to discover that bring home just how much was at stake in making images during the war. Artists realized how much their work mattered in public dialogue and how political even the most straightforward imagery could be; they found paid roles in the war that had not been possible before. 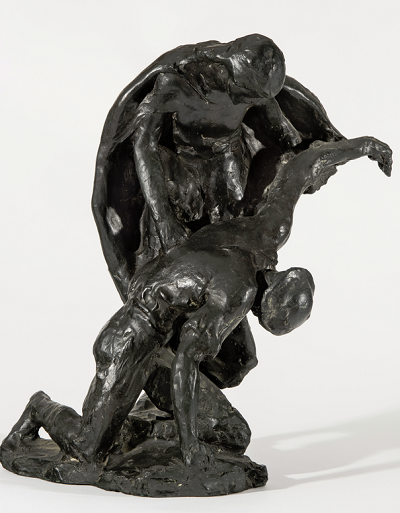 Gertrude Vanderbilt Whitney (1875–1942): Found, 1920, BronzeUltimately it is the evidence of intimate experience that stays with me. Edward Steichen tasked with photographing destruction during the war from planes; Ivan Albright documenting wounds and their treatment at a base hospital in France; Anna Coleman Ladd constructing prosthetic masks to help with the social and emotional rehabilitation of war wounded. Pippin and Wilson's personal narratives of the war as soldiers on the front lines. These are the stories that feel relevant to any war, not just World War I, though they speak to witnessing at that time. They reveal the costs of war but also the human impulse to survive, make sense of their experiences, and let the world know what happened. Ultimately that seems like the enduring story of this moment in American art.

This exhibit is slated to travel. Tell us about the schedule.

After the PAFA presentation, World War I and American Art will travel to two additional venues: