VFW’s Quartermaster General Debra Anderson Sworn In as a Commissioner to the U.S. World War One Centennial Commission 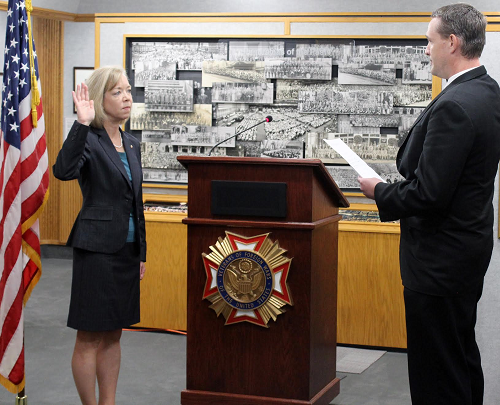 VFW Quartermaster General Debra Anderson (left) is sworn-in as the newest Commissioner on the United States World War One Centennial Commission by Brandon Boyd, General Services Administration Deputy Director of the Office of Human Resource Services. The ceremony took place at VFW Headquarters in Kansas City, MO.Ms. Debra Anderson was sworn in on Monday, October 17th, 2016, as the newest Commissioner to the United States World War One Centennial Commission. She was appointed to the position by the Veterans of Foreign Wars (VFW) organization, where Ms. Anderson is the Quartermaster General. The swearing-in took place in a small ceremony hosted by the VFW National Headquarters in Kansas City.

A special guest for the ceremony was Congressman Emanuel Cleaver, II (D-Missouri), who was an original sponsor for the bill that created the Centennial Commission. He stated "This is a great day for the Veterans of Foreign Wars, and for the World War I Centennial Commission. Debra Anderson's leadership in these two outstanding organizations will bring teamwork and achievement, in our efforts to honor these veterans who went before us." 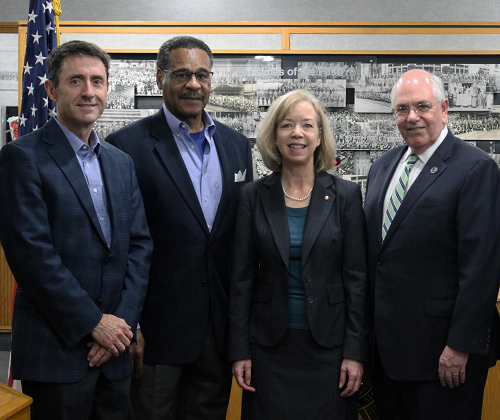 Debra Anderson graduated from the University of Missouri Columbia. She served for 13 years in the U.S. Army, which included deployment to Operation Desert Storm. She has been awarded the Bronze Star medal, two Meritorious Service Medals, the Southeast Asia Service Medal, the Kuwait Liberation Medal, and the Parachutist Badge.

When asked about her new duties with the Centennial Commission, Ms. Anderson stated "The Congressional Charter of VFW states as one of our purposes: “To perpetuate the memory and history of our dead, ...” We believe it’s important to remember all who serve our country and particularly those who made the ultimate sacrifice. I’m excited about the Centennial Commission's educational programs and the 100 Cities / 100 Memorials preservation project. We have VFW members all over the country, and this is a good way for them to get involved in helping their communities remember our veterans of World War One."