Sabin Howard is the sculptor half of the partnership that is developing the design for the National World War One Memorial to be built in Washington, D.C.

The design-concept for the new National World War One Memorial in DC calls for a remarkable bas relief wall of sculpture that you are working on. Tell us about the wall, and your efforts to bring it to life. 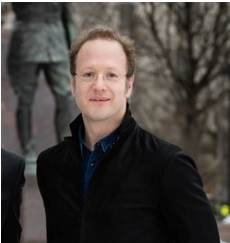 Sabin HowardThe new National World War One Memorial at Pershing Park in Washington, D.C. has, as part of its design concept, a 75-foot long bronze bas-relief sculpture, to honor the 4.7 million Americans who served in WW1, including the 116,000 who lost their lives. As sculptor for the project, I am responsible for creating an appropriate work of art for the wall. This wall is, in many ways, a visual centerpiece for the Memorial, and offers a creative canvas for us to tell the WW1 story.

Details are still very much open, as the review and approval process is still underway, and that regulatory process determines the final outcome. I can say, for the current version that I hope to present for review, I would like to create an allegorical version of the emotional journey that these war veterans experienced.

Since the wall is so long, I can see the possibilities of telling this story through different chapters, or acts, showing the call to arms, the battle, and the aftermath and loss. A recurring figure would be shown leaving his family, joining the battle, and returning home – or perhaps not returning. Figures depicting those who served would represent a spectrum of different American participants, including men and women of different ages, races, and wartime responsibilities.

How did you come up with this approach to telling the World War One story? What do you want audiences to take from the experience of this artwork 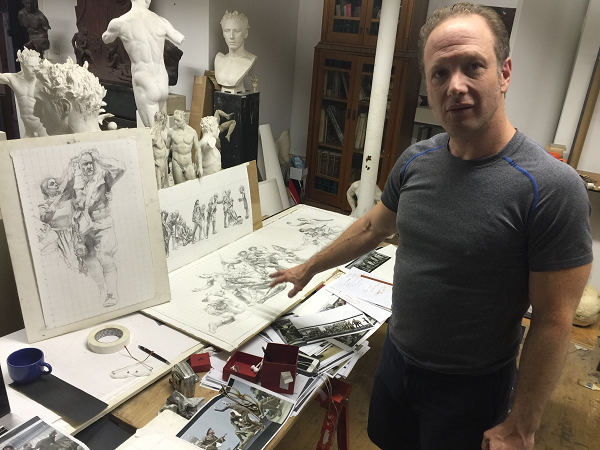 Sabin Howard in his sculpture studio in NYC.The Commission asked me to create a work that shows courage and sacrifice of American soldiers in WW1, and their accomplishment in bringing the war an end, but that also conveys the loss experienced by the nation in the war. By creating a relief wall that is an allegorical narrative with a truthful emotional experience of one soldier’s journey, the Memorial becomes a story that touches people's hearts. I wish to create a WW1 Memorial that will excite the average visitor and cause them to have an emotional, visceral response. As an artist it is my job to ignite this sense of excitement so that the visitor will go home and be interested in learning more about WW1.

It is my goal to create a relief panel that will grab people’s attention and create a sense of excitement about this historical moment by visually humanizing the war through the story that can be understood by all. This is the power of art: bringing the mind to a different location and feeling. In short, the Memorial must have transformational qualities.

What monuments in Washington DC inspire you? What ones do you consider to be your favorites, or to be a successful at the level that you are trying to achieve?

The Lincoln Memorial is one of the most successful memorials in the world. For the very reason that it elevates and transforms visitors in a visceral way as they climb the steps, great art is meant to transport us mentally out of the mundane world. 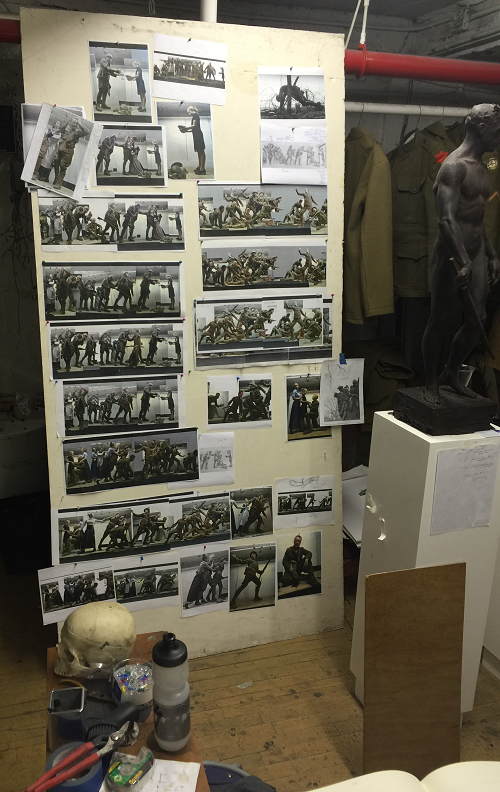 Working photos of models in a variety of possible poses, for use with developing the vision for the bas relief wall. The Vietnam Memorial also does this as well, with the sheer number of people who have died, and are left behind with their name on the black marble wall. It is impossible to ignore the sadness as you walk past all those names and look at your reflection in that black polished monolithic wall.

The monuments and memorials that are most successful are the ones that make us question our humanity, and the ones that create a reaction, full of feelings and caring for those that passed before us.

The war ended one hundred years ago, and all the veterans are gone. Why is it important to create this memorial, and to remember the veterans of WW1?

Even though WW1 occurred 100 years ago, we are still the same nation of people. We carry similar feelings that those soldiers carried with them, as they left their families and traveled overseas to defend their country. We must not forget that the veterans of today, as they leave their families to serve our country, must have a sense that they too will be remembered 100 years from now. A memorial that is filled with a love of humanity shown through the art, will surely have an impact on these veterans of today—giving them a sense that they are valued for the sacrifice that they make protecting this country.