Ryan Hegg is the Director of the 2016 New York City Veterans Day Parade.

You have a great Veterans Day Parade coming up! Tell us about the many participants. What will we see there?

We're expecting 30-40,000 participants, in nearly 300 units, and close to 200 floats and vehicles of all kinds (not including 2-300 motorcycles!). The Parade goes up historic Fifth Avenue, following the same route as many of the original homecoming parades for units returning home from World War One. It will be broadcast live on PIX11 and other stations on the Tribune network, as well as on AFN around the world and online at Military.com.

This parade is unique in that much of it is 'by veterans, for veterans'. Can you tell us about that aspect?

Our parade is a great collaboration between veterans and non-veterans. The older veterans who revived the Parade after it fell on hard times in the 1980s made it a point to actively include civilians in the organization and leadership of the Parade. After all, why should veterans have to throw their own Parade? The approach continues today, as post-9/11 veterans and their friends and supporters join the effort.


Will there be World War One 'representation' at the parade?

We have a regular World War One reenactor presence in the Parade; we're expecting a bigger turnout this year, including a reenactor who portrays General John "Black Jack" Pershing. Also, a number of the units participating in the Parade have roots that reach back to World War One units, including the 369th Sustainment Brigade (formerly the 369th Infantry - the famed Harlem Hellfighters) and the 77th Division. 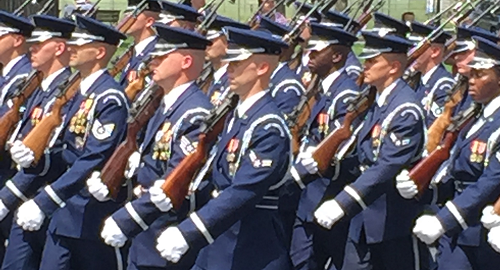 The veterans of World War I are all gone. Why is it important to remember them, and to represent them in your parade?

We lost our last U.S. World War One veteran, Frank Buckles, a little over five years ago. However, we can draw a straight line from those who served in World War One to those who serve today. For one thing, they were the parents of our World War Two veterans, and instilled the values that led this generation to be known as America's "Greatest". Looking at the present day, we have valuable lessons we can learn from the experiences of the WW1 generation, both in terms of their service and their return home to society. For instance, you can find articles from 1919 talking about veteran suicides, which is a major problem still today, showing how we as a nation are still grappling with the question of how to help our veterans return home. By honoring our WW1 veterans, 100 years later, we show our current -- and next -- generation of veterans that their service will be always valued and honored.