MOTT HAVEN, Bronx, NY−Artist Sabin Howard says his Bruckner Boulevard studio in Mott Haven is the perfect place for him to work with his mind and his hands. 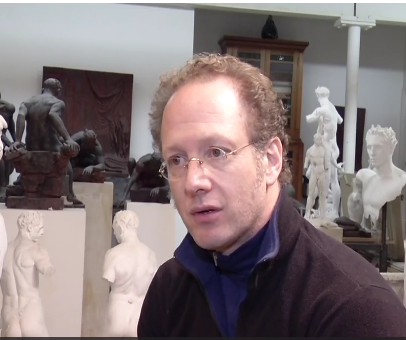 Sabin Howard interviewed in his Bronx studio by News12.Sabin is part of a team selected by the United States World War One Centennial Commission to create a giant memorial in Washington, D.C.

"The whole story here is about a soldier that went through World War I, and it's not historically truthful, but it's emotionally truthful," Howard says. "It's a visual narrative, so what I've done is I've created a wall."

A 75-foot wall to be made of Bronze. It tells the story of a man who leaves his family, goes to war and returns home wounded to his wife and daughter.

"As you walk along this wall...you're going to see this story unfold," Howard says.

Howard says the memorial project is the first he's done for public display. It's also going to be one of the longest figurative compositions in the world.

The Centennial Commission says it is "impressed with Sabin's incredible work" on the project.

The rest of his work in a 33-year art career has been for private collectors.

Watch the video interview of Sabin Howard on the bronx.news12.com web site here: