How did participation in the First World War shape modern America?

By Melvin Small
via the LAWFARE blog

A review of Michael S. Neiberg's The Path to War: How the First World War Changed America (Oxford University Press 2016).

Michael S. Neiberg’s The Path to War: How the First World War Changed America seeks not only to tell the story of how Americans reacted to World War I but also to emphasize the significance of that “largely forgotten” war (p.7) in the shaping of modern America. 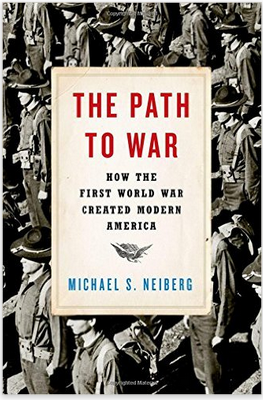 Neiberg is the distinguished and prolific author of more conventional accounts of the outbreak of the Great War, its military history, and the ending of World War II, among other books. He concentrates on the various American publics’ opinions as he moves through the key events that determined their three-year shift from rooting for the British and French in 1914 to supporting President Woodrow Wilson’s call for war in the spring of 1917. Presidential decision-making—the subject of most books on American entry into the war—here takes a back seat to the positions promoted by citizens of all political views, ethnicities, and stations in life, as seen in magazines, cartoons, speeches, newspapers, and letters.

Read the entire article on the LAWFARE blog here: