Fighting for Democracy in World War I—Overseas and Over Here

By Maurice Jackson
via History Now 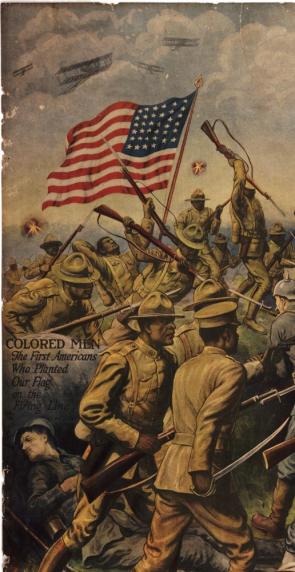 Detail from a World War 1 recruiting poster, ca. 1918. (Gilder Lehrman Collection) The United States invaded Haiti, its southern neighbor, in 1915—effectively making it a US protectorate—citing concern over the influence of Germany and France, the financial and political instability of the country, and the “safety” of the newly opened Panama Canal. Yet as war loomed over Europe the US did not declare war with Germany right away, first breaking diplomatic relations on February 3, 1917. On April 2, 1917, President Wilson went before a joint session of Congress to request that war be declared. The Senate voted on April 4 and the House on April 6 to support his appeal.

War plans had been in the making, and “more than a month before the United States declared war, the First Separate Battalion (Colored) of the Washington, D.C., National Guard was mustered into federal service.” The regiment had at first been assigned to guard the buildings of the Federal Enclave, including the “White House, the Capitol, and other federal buildings, and facilities such as bridges and water supply, against possible enemy sabotage.”

A source of pride to blacks in Washington, there was white resistance to the battalion’s mobilization and deployment overseas. Racist propaganda insisted that blacks could never be men of valor and were not to be trusted on the battlefield. Yet as the war preparations continued, black troops were needed and proved invaluable, just as in the Civil War.

Soon W. E. B. Du Bois caused a stir with his “Close Ranks” essay published in The Crisis in July 1918. The second paragraph of the essay reads:

We of the colored race have no ordinary interest in the outcome. That which the German power represents today spells death to the aspirations of Negroes and all darker races for equality, freedom and democracy. Let us not hesitate. Let us, while this war lasts, forget our special grievances and close our ranks shoulder to shoulder with our own white fellow citizens and the allied nations that are fighting for democracy. We make no ordinary sacrifice, but we make it gladly and willingly with our eyes lifted to the hills.