Sculptor Sabin Howard in Service of Something Bigger

By Milene Fernandez
via the Epoch Times

NEW YORK−Sabin Howard is in the throes of a monumental task. The master sculptor has to conceptualize a horrific slice of history and then translate it into sculptural form that is engaging and worthy of honoring incredible sacrifice. 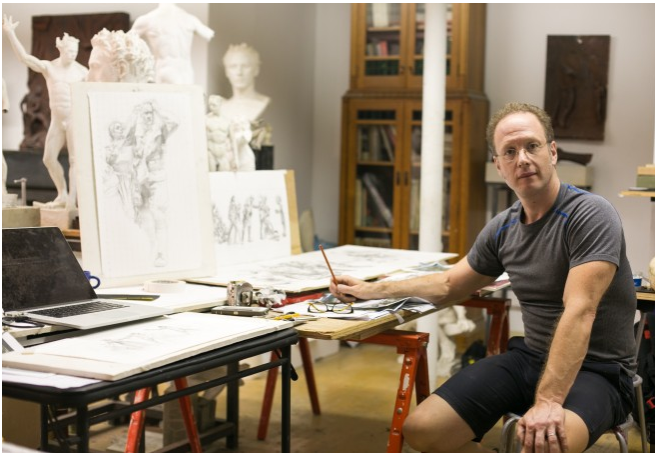 Sculptor Sabin Howard at his studio in the Bronx, New York, on Sept. 13, 2016. (Benjamin Chasteen/Epoch Times)“It’s pretty epic when you lose 10,000 people every hour,” he said.

Nearly a year ago, Howard and the young visionary architect Joe Weishaar won the competition of The U.S. World War One Centennial Commission to create the National World War I Memorial at Pershing Park, with views to the White House.

The U.S. World War One Centennial Commission is looking to raise $50 million in private funds for the national memorial and hopes to inaugurate it on the 100th anniversary of the end of the war on Nov. 11, 2018.

Howard envisions a visual narrative of World War I that will help people contemplate our shared humanity, for many generations to come. He called his design in progress a soldier’s journey.

“I’ve redesigned the whole thing at least a dozen times,” he said, looking at a long scroll of photographs on his studio floor in the Bronx in September. It shows models in dynamic poses, wearing World War One uniforms from 100 years ago.

He’s had several sessions with models. He directs them into slow motion action and then takes photographs of the poses, gestures, and expressions he wants to convey. From the photographs he makes sculptural-looking drawings, as reference for a three-dimensional maquete (scaled model), from which the actual monument will be created.