Rear Admiral James Carey has had a long career of public service, and is now in the process of working on memorial preservation projects. He talked to us about the importance of remembering the past, and the meaning of local WW1 memorials in communities around the country.

You are working on a remarkable memorial project involving a stand of memorial trees from World War One. Tell us about the project. 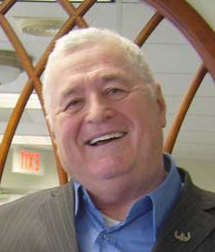 Rear Admiral James J. Carey, USN (Ret.)Actually I'm working on two projects in Berlin, WI, my old hometown. The 1st is the planting of 2 Memorial Trees on the grounds of the local VFW Post, in memory of my Father and Uncle, both of whom served in the Cavalry in France in WW I. That project is almost complete and has been done in close cooperation with the VFW, the Berlin Area Historical Society [BAHS], and the Saving Hallowed Ground WW1 Commission project providing registry of WW1 Memorial Tree plantings. Both of these trees have already been planted and dedicated and registered with Saving Hallowed Ground, and only await the arrival of the tree identity tags from Saving Hallowed Ground to be completed.

My 2nd project is related to 3 existing WW1 entities in Berlin, WI, one related to an organization formed after the war for WW1 veterans and thus more of a history project, and the other two related to two WW One existing Memorials at Berlin's main cemetery, Oakwood Cemetery, where the cemetery Main Gate was constructed from local quarried granite and dedicated to the memory of the WW1 veterans. I will be sending you a photo of that dedication plaque, which is mounted on the gate, shortly.

The other Berlin WW1 existing memorial is the 30 trees lining the cemetery roadway directly behind the entry gate and leading up to the cemetery chapel. There were 30 original trees planted and dedicated individually to the 30 Berlin, WI area men killed in WW1. Dutch Elm disease wiped out the original trees, which have since been replaced by maple trees, and a part of the WW1 Memorial restoration efforts that I and my foundation, the Admiral Carey Foundation, are involved with relates to the placement of the individual identification stars by each tree honoring the men who died. Those stars are currently on a large display board and are kept in the chapel, where of course they are not seen by very many cemetery visitors, and thus need to be placed by the individual trees. 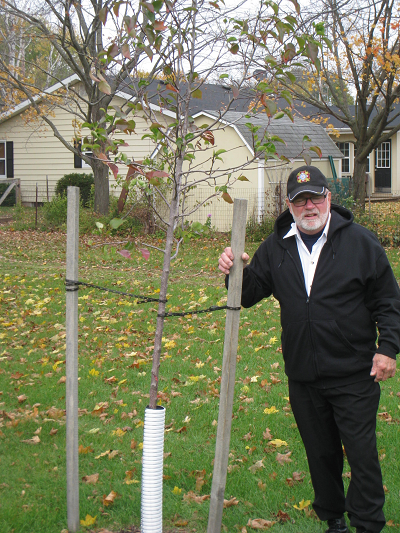 Post Chaplain Mike Trampf of VFW Post 2925, Berlin, WI, after the Memorial Flowering Pear Tree planting honoring Corporal John Eugene Carey, a World War One veteran who served in France in the U.S. Army Co. C, FIRST Army Corps Cavalry. John Carey was Admiral Carey's uncle. While I and my foundation have, to a degree, been the genesis of this restoration effort, the key drivers and what we would identify in military terms as the On Scene Commander, is the Berlin Area Historical Society [BAHS] and it is they who are the ones that will be handling all the local negotiations with City and Cemetery officials and do the day to day work on this important memorial restoration work.

What challenges have you faced in trying to make this project a reality?

I have been fortunate in that while many people leave their old home towns after high school graduation, never to return, I have always maintained my ties there because the area and the people there were very important to my training and education that led to my success in adult life. I have been involved in other "memorial projects" there and thus had the contacts and linkages I needed to get these projects to be considered and then brought to fruition. In particular, I have worked closely with the BAHS on several projects and given their close ties with the city and library and cemetery board and all the townspeople, they are the On Scene Commanders that have helped make all my Berlin, WI projects come to ultimate completion. BAHS URL is www.BerlinAreaHistoricalSociety.com How have you overcome them? In large part, due to my being 1000 miles distant, the key has been persistance, plus friends and contacts in Berlin who know me and trust me and have learned that what I say to them or tell them I will do will, IN FACT, happen.

The BAHS has been invaluable and very much key to making all these projects happen as they also "do what they say they will do". What advice would you have for other folks around the country who are adopting their own WWI memorial site in their local community? My advice to them is to start with their local historical society AND their local veterans organizations.

James Carey serving during Operation Desert Shield/Desert Storm in 1991.Obviously, WW1 has application to the veterans organizations and also is a matter of high interest to the historical societies, given it's impact on their local communities at the time and the impact it had on local history and local families and any WW I memorials that later came into being. I have always been thankful for the qualities and character instilled in me by local teachers and community leaders when I was growing up, and thus feel an obligation to "pay back" to my hometown for all they did for me that later helped to cause my ultimate success in life. As such, I do not hesitate to always offer some financial assistance for any local project I am advocating, and this helps to take the pressure off of these local folks that they would have to somehow raise all the funds needed. This has proven helpful to getting things started, and also adds to my own personal sense of satisfaction and fulfillment that I AM "paying back" for the guidance and character-building that was given me when I was a boy growing up there.

Tell us about your own background, and your own personal connection to World War One.

Both my Dad and Uncle served in France in World War One. Both were horse trainers and sulky race drivers prior to the war so both eventually ended up being assigned to cavalry units. I well recall playing with my Dad's WW1 uniform items up in our attic when I was a young lad--- his helmet [cast iron and very heavy] and gas mask and leggings, etc. And from time to time, I was able to talk to both my Dad and Uncle about their service, but in truth, I learned much more from a local book published following WW1 that listed all the men and women who served in that war, along with their photo and a recap of their military service.

This was provided by the BAHS and was of IMMENSE HELP in that all the military records of ALL the WW1 soldiers were destroyed in a fire in the military personnel records archives in St. Louis in the 1970's so I was never able to obtain copies of their service records and the WW1 book put out by Green Lake and Waushara Counties was the only records that I was able to find.

Private Robert Emmett Carey, Admiral Carey's father, in Army uniform during WW1Later in life, after a 33 year Navy career, I founded the Rear Admiral James J. Carey Foundation, dedicated to programs and projects in support of military veterans and their sons and daughters, grandsons and granddaughters, and nieces and nephews. Further details on those efforts are on the foundation website: www.AdmiralCareyFoundation.org

All of the veterans of World War One are, sadly, gone now. Why is it important for us to remember them, through efforts like the 100 Cities / 100 Memorials preservation program?

It is important to remember them AND ALL MILITARY VETERANS because there came a time in our nation's history when they stepped forward at a time of national crisis and said "take me. I am willing to put my life on the line to ensure that my children and grandchildren, my family and friends, and all Americans will continue to be able to live in freedom and liberty". This is a HUGE sacrifice that these men and women made---- it began in the Revolutionary War and continued on in World War's One and Two, Korea, Vietnam, Afghanistan, and Iraq, and every other threat to our nation. ALL of these men wanted the same chance to have a long life and their own families and a chance at happiness just like everyone else, but they came forward when truly evil people threatened our nation and volunteered to put their lives on the line for all of us.

If we as a nation are to maintain our national dignity and gratitude, we absolutely must NEVER be found wanting in our continued commitment to the memory of these brave men who served in our behalf and the many of them who gave their lives for the rest of us. Given that this is the 100th Anniversary Commemoration of World War One, described at the time as The Great War, this is our chance to step up to the plate and ensure the memories of these brave men do not fade into history and that the memorials established 100 years ago in gratitude for their service are not allowed to fall into disrepair and faded memories. We owe them so much more than that, and this is our chance to show what we're made of, just as they showed us what they were made of 100 years ago.