First-person shooter could spark wider interest in the Great War

Battlefield 1: Can a video game about WW1 be both entertaining and a history lesson?

By Jonathan Ore
via CBC News

How historically accurate should a video game be when depicting something like the First World War?

The conflict is one of the bloodiest in human history, having left 16 million dead and creating geopolitical conflicts that continue to this day. 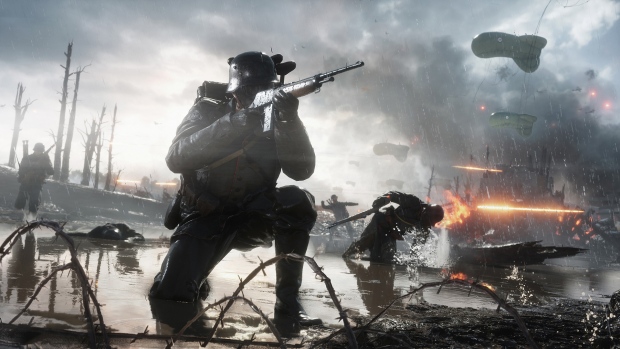 Battlefield 1 immerses players in the grit and unrelenting destruction of the First World War. (DICE/Electronic Arts) Game developers have long used history as their digital playground and tweaked the facts to suit their needs — adding some colourful characters here or a few more explosions there. Ubisoft's Assassin's Creed series, set in periods such as the Italian Renaissance or Revolutionary France, is just one example.

The question is whether the studio DICE would do the same for Battlefield 1 (available now for PlayStation 4, Xbox One and Windows PC), a first-person shooter set in what was (prematurely) called The War to End All Wars.

The opening prologue plunges the player into the middle of a major offensive in France in 1918, with the charred remains of buildings and trees strewn about a blasted wasteland of mud and corpses.

As a member of the Harlem Hellfighters, a real-life regiment that consisted largely of African-American soldiers, you have to defend an area from a German onslaught. Artillery rains from above and enemies with flamethrowers flood your position with fire and smoke.

After about two minutes — if you survive that long — you run out of ammo, and find yourself outnumbered. When you're inevitably gunned down, a short card with your soldier's name and lifespan appears on the screen — for example, "Matthew Collings (1884-1918)." Then you're placed in the role of another doomed recruit, in another part of the battlefield.

The point Battlefield 1 clearly wants to make is that the war took young soldiers' lives by the thousands — most of them never had the chance for a moment of glory.

Read the entire article on the CBC/Radio-Canada web site here: