By Anthony C. Hayes
via the Baltimore Post-Examiner

A century ago, as the horrific “War to end all wars” dragged on, a daring young sportsman from Baltimore, named Francis Warrington Gillet, set his sights on throwing in with the Allied cause. By Armistice Day, the flying ace, who was known to his comrades as “Razors”, was officially credited with downing 20 German aircraft – a number second to only the wildly acclaimed ace: Eddie Rickenbacker. 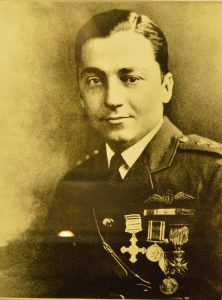 On September 17, members of the Western Front Association, East Coast Branch (USA), were joined by descendants of Captain Gillett, diplomatic representatives of Great Britain, Belgium, and France, and other invited guests, in honoring Gillet and his fellow service members with the unveiling of a painting, titled “Maryland Over Flanders”. The dedication ceremony took place at the War Memorial Building on North Gay Street in Baltimore.

The Western Front Association East Coast Branch (USA) commissioned noted aviation artist Michael O’Neal to create the commemorative painting for permanent display at the War Memorial Building. O’Neal’s stunning work – rendered in oil on Belgian linen – depicts Gillet’s Sopwith Dolphin fighter emerging from the clouds with two German Fokker D.VII’s falling away on either side. The painting – based on an actual event – recalls a harrowing dogfight Gillet won near the end of the war.