Why World War One matters for your Federal agency

By Sarah Herman
via digitalgov.gov

I recently asked some friends—a group of intelligent, successful individuals—what they knew about World War One. The responses I received included, “Ummm.....it was in the 1910s?” or “Started in Europe when the archduke was killed?” Beyond this, it’s mostly blank stares and shoulder shrugs. 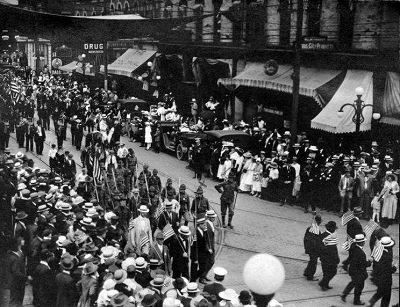 Mobilization parade in 1917People who consider themselves history geeks might mention President Woodrow Wilson’s 14 Points, or the creation of the League of Nations, but for many Americans, World War One is a forgotten war. It happened thousands of miles away, unlike the battles of the Civil War, and It was too long ago for most Americans to have known a person that served, unlike veterans of World War Two.

Despite these inherent challenges, the role of World War One as part of our nation’s history needs to be communicated to the public. The decisions and actions carried out nearly a century ago still reverberate today in our country. And April 2017 will mark the 100th anniversary of the United States’ involvement in this global conflict.

At the American Battle Monuments Commission (ABMC), where we manage eight overseas American military cemeteries from World War One, we’re preparing our stories now so we’re ready when the centennial begins. And now is the time for you to start thinking about how you can share your agency’s mission through the lens of this war.

Read the whole article on the digitalgov.gov web site at https://www.digitalgov.gov/2016/11/08/why-world-war-i-matters-for-your-agency/.