Rich Bachus is a writer, publisher, and teacher whose inheritance of a family collection of artifacts dating to World War One inspired an interest in the Great War that led him to author a book about his grandfather's service. Now Rich has become a Publishing Partner on the U.S. World War One Centennial Commission web site, where his Trench Commander blog chronicles "the Bachus family military adventures and how they influenced me and my last-of-the-baby-boomers generation." In an interview, Rich talks about the origins of this project, what he has learned about the history of his own family and the nation, and why stories like Trench Commander are important to tell during the Centennial Commemoration of World War One.

Your Trench Commander blog is really interesting. Tell us about what it is, and what your vision is for it. 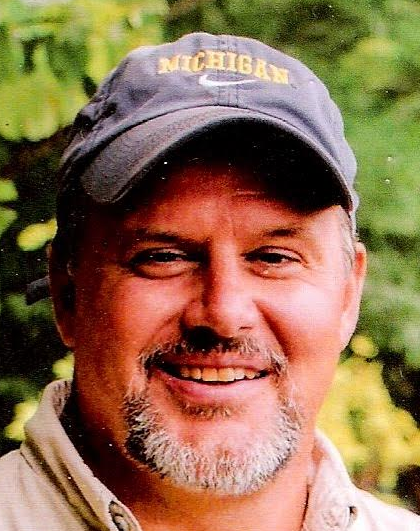 Rich BachusI love digging through the nooks and crannies of history, and I’m especially drawn to a 100-years-ago-today approach. I was pleased to discover that several projects featured on the WW1 Centennial Commission site use this framework. From the The Great War Channel to Mike Hanlon’s worldwar1centennial.org work, there is considerable effort going into exploring week-by-week snapshots of what was happening in the time leading up to and through WW1. Most of the existing projects provide a wide-screen view of the war as seen through the eyes of entire armies, whole countries, or the great men and women who appear in the history books. On the other hand, features like “Stories of Service” highlight the lives of individual soldiers through a much narrower lens. But sadly, these more intimate stories usually don’t come with much more detail than a few faded photos, a couple of old records, and perhaps a story or two passed down from generation to generation.

The Trench Commander blog is all about bringing the war to life through the details (both great and small) of one soldier — my grandfather Capt. Joseph L. Bachus — and his family: wife Lina and daughter Betty. I barely knew these ancestors of mine before Aunt Betty passed on and left the family archive to me. As luck would have it, this incredible collection of personal letters, trench maps, army records, photographs and postcards fell into the right hands. As a former journalist, history major, and sometime teacher, I knew that some day I would write about the Bachus family military adventures and how they influenced me and my last-of-the-baby-boomers generation.

My vision is to unpack this archive before the eyes of WW1 Centennial Commission followers like you and attract new readers to the cause. Each week, I’ll post photos, records, and letters that tell the story of how one family — my family — went to war, handled the immense challenges both at home and in the trenches, and lived to tell about it.


What is your own background -- Are you a historian? history buff? Did you always feel a close connection to World War One, and the family members that you write about? 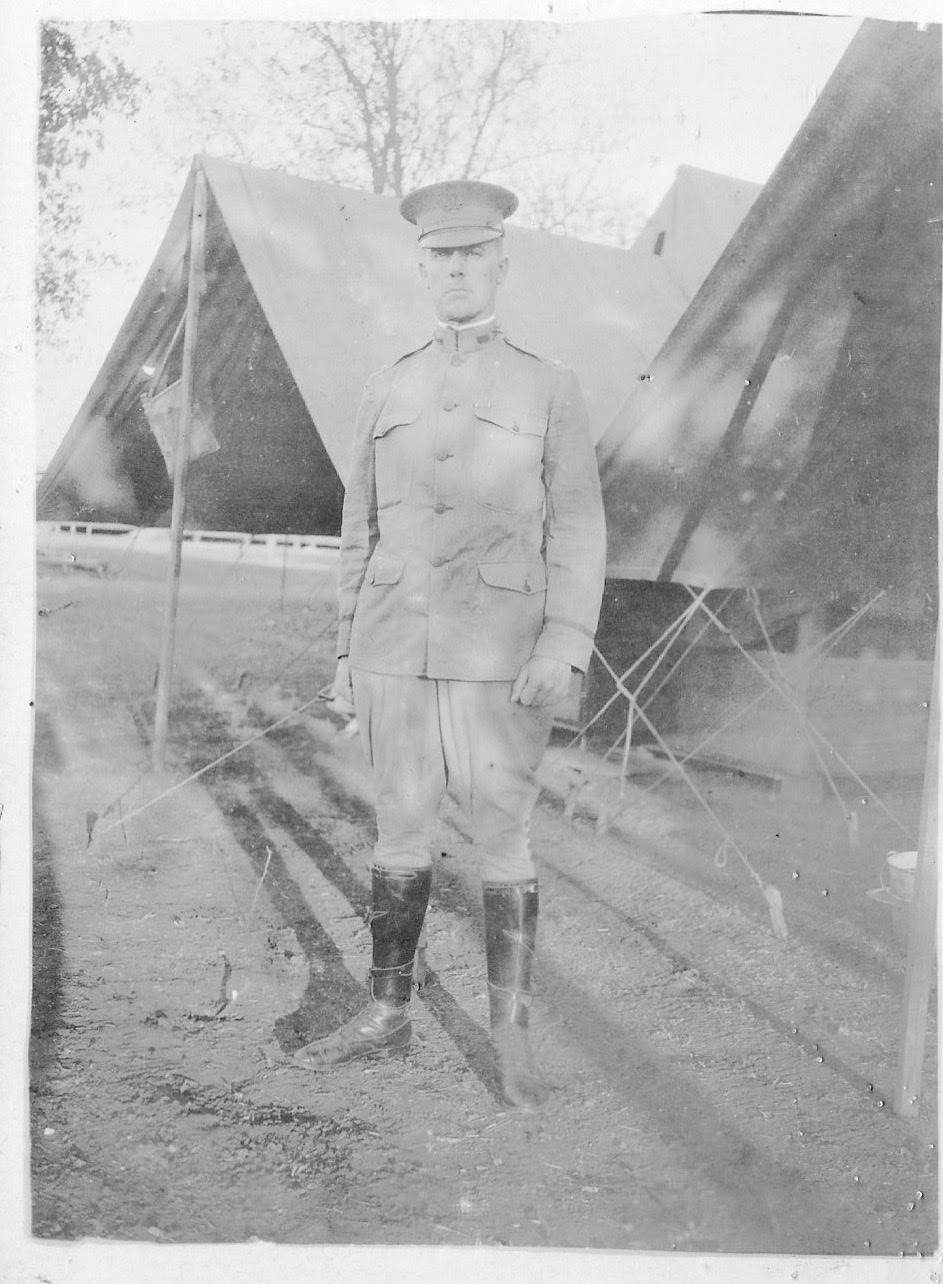 Capt. Joseph L. Bachus, Rich's grandfatherThe blog was born out of my effort to turn my family’s century or so of military service into a fictional family saga that is just weeks away from being published by Hellgate Press as I write this. Although I double-majored in history and English as an undergrad at Colby College in Waterville, ME, and have an master's degree from the University of Michigan that lets me teach history, I came to my personal study of WW1 as a writer.

I spent more than a year gathering additional sources from my local Harbor Springs Historical Society to the Library of Congress and the National Archive to gain perspective on the bits and pieces of the story that were passed down to me. I gained some of the best insights into the war from the unit histories and other books that my grandfather read and passed down to me. After you get a chance to read the real-life story of the Bachus family, you can get a very clear picture of the role that WW1 played in my family’s life by reading my novel Into No Man's Land. It has yet to appear online, but on the blog is information on how you can pre-order a signed copy.

Your blog requires a lot of research, both into regular military matters, and into your own family. What surprises have you uncovered from that research?

Personally, I was never promoted beyond the rank “army brat,” so I had a lot to learn about military life even though I spent most of my childhood around barbed wire fences and men and women dressed in olive drab and khaki. My grandparents died years before I was born, and my father died the year I graduated from high school, so I spent a lot of time sorting through the pieces of their lives from those boxes that came from Aunt Betty. I only had a handful of living connections to their lives. I had some sense of Joe’s remarkable military career and how it took the rest of his family around the world, but the more I dug in, the more surprises came out. 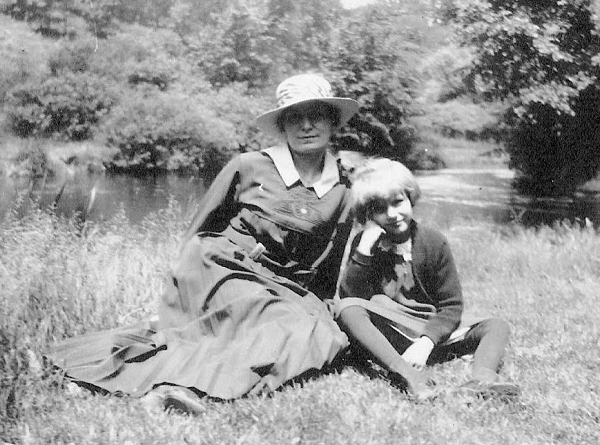 Rich's grandmother Lina Anne Johnson and his Aunt Betty BachusFor example, I learned that Joe was giving a battlefield promotion to captain by General Pershing after Joe escorted the commander of the A.E.F. around the trenches of Alsace-Lorraine. But Joe’s competence and bearing under fire made sense when I learned that he had already spent a half dozen years in uniform before WW1. I’m not sure if it is a record or not, but he served in four of the five main branches of military — first as a teenage naval apprentice, then as a U.S. Marine, through the war with the Michigan National Guard and regular army. And finally, in WW II, he was a colonel in charge of the Army Air Corps Induction Center for the Great Lakes region. I don’t want to give away the biggest, most startling surprise that I uncovered in my research, and it happened years after the war. But you can discover that family secret in ... you guessed it ... my novel Into No Man's Land. You can get a free excerpt of the novel by requesting one on any page of the Trench Commander blog.

World War One happened a hundred years ago, it is seen as a forgotten war. Why is it important to tell these stories of World War One?

It is sad that WW1 and its centennial are so far off the radar of most Americans. Anyone with even a high-school-level understanding of this conflict understands that it consequences were huge and still with us. In my little town of Harbor Springs, Michigan, the local American Legion Post is named the Smith-Hoover Post after two local men who were killed in action in France in 1918 — one near the Somme and the other in the Ardennes Forest. We have roads like the “Red Arrow Highway” in southwestern Michigan named after my grandfather’s 32nd Division, but most people who drive it every day probably have no idea of the significance of its name. If it hadn’t been for these boxes from my Aunt Betty, I would probably be just as blind to the history around us as most people.

Capt. Joseph Bachus commanded these men of Co. E, 126th Inf. Regiment of the 32nd Division in the trenches of Alsace-Lorraine. As to why it’s important to tell these WW1 stories, I can certainly think of well-worn platitudes about “history repeating itself” and such. But as a story teller, I feel that our collective national forgetfulness about WW1 is a bit of a blessing in disguise.

By chance, I toured the beaches and cemeteries of Normandy a few years before the 50th anniversary of D-Day, and it was pretty quiet then. Back then, D-Day felt more like those still photos on the pages of those excellent Time-Life WW2 books. Remember those? By the time the D-Day anniversary actually arrived, however, most of America had some sense of what those G.I.s faced as they stumbled out of those landing craft, scaled those cliffs, and parachuted behind enemy lines. They may have had job titles like news anchor, historian, and actor, but Tom Brokaw, Stephen Ambrose, and Tom Hanks helped bring D-Day to life because of great story-telling. And the most profound aspect of what they did was that they let D-Day veterans tell their stories in their own words. Forgotten memories are rich soil for plowing anew.

Our WW1 stories are relatively unknown by most Americans right now, but it is my hope that rediscovering them and retelling them will do more than help to build a Washington, DC monument. It is my hope that telling these stories will spark a flame of new inquiry that will bring WW1 to life for generations to come. Our WW1 veterans are no longer around to tell these stories themselves, but they have left their words behind for us to share. That’s what Trench Commander is all about.