"Meet others who are passionate about living history"

Kevin Fitzpatrick is a noted historian, reenactor, author, and living history storyteller. He is based in NYC, and he has particular interest in how his city was involved with & impacted by World War One. As a reenactor, he is leading an event, called the Doughboy Swap Meet, to help recruit new history buffs to the field, and also to help outfit reenactors who are already active within that community. He took a few moments to talk to us about the event taking place on February 17, 2017.

What is a Doughboy Swap and Sale? 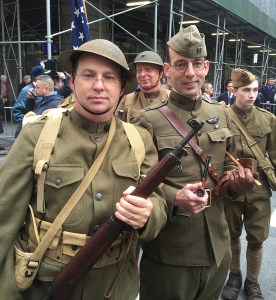 Kevin Fitzpatrick (left) in a Doughboy uniformIt is a one-day event in New York City for World War One reenactors to find uniforms and equipment, and to meet others who are passionate about living history. A proper Doughboy impression starts with a basic uniform. At this event we’ll bring together reenactors and vendors with items specific to Doughboys, from collar discs to helmets.

Why are you doing this? Who are you trying to reach?

As the centennial of America’s entry into the war approaches, more living history enthusiasts are being drawn into reenacting and Great War impressions. We see a steady increase in questions on social media and forums about getting into the hobby and how to get kitted up properly. There are a lot of reenactors in the New York region, and they can help those new to WW1 living history get properly equipped. Who we want to reach are both those that are already reenactors and want to swap or buy more gear, as well as meet those that want to begin an A.E.F. impression.

Tell us about the opportunities out there for Living History and Reenactor people, historically, and with the upcoming centenary years. 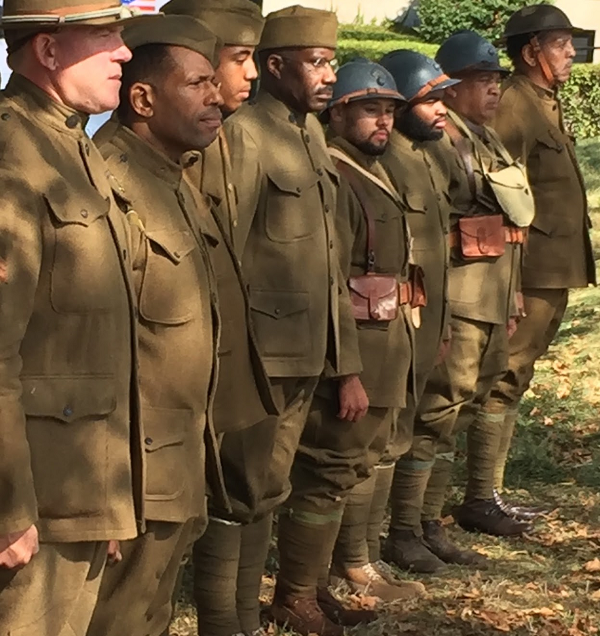 Reenactors at the 2016 Doughboy Days on Governors Island in New York City.We are lucky in New York because we have two major events for the Great War reenacting community. The Veterans Day Parade had a platoon of 30 participants representing Doughboys this year, and we want to double that number for 2017. The second annual World War One History Weekend is September 16-17, 2017, at Governors Island National Monument. For 2017 we’ll have two nights to bivouac on the island, sleeping under the stars in New York Harbor.

But really the biggest annual event in the U.S. is the Great War Association weekends in Newville, Pennsylvania. They get hundreds of participants.

What attracted you to the world of Living History/Reenacting?

When I was discharged from the Marine Corps in 1989 I never thought I’d put on another uniform again, much less the U.S. Army! But after reading and researching the era for so many years, I finally gave in to my friend’s invitation to join him and his brother a couple years ago as A.E.F. reenactors. I’ve been working on my impression ever since. I really like being able to tell a story to the public about this era of history, and wearing the uniform helps. My marching and manual of arms is really rusty, so it’s a lot of fun to get back and do what I did when I was 18. 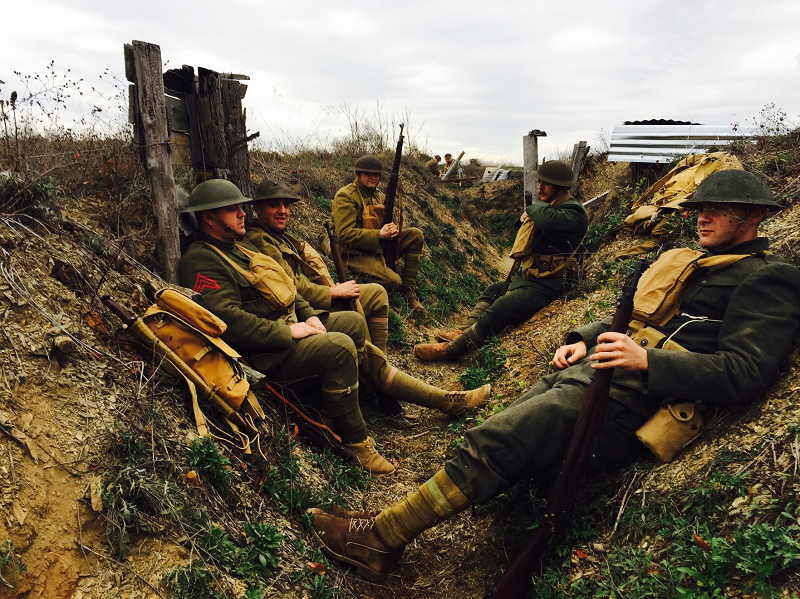 World War One reenactors take a break during the Great War Association weekend in Newville, Pennsylvania