"To remind present and future generations of the sacrifices made"

Terry Krautwurst, from LeRoy, New York, is an extraordinary person. In 2015, just before Memorial Day, he walked into his home county's history department, and delivered to them a six-year project that he had just completed. Terry had personally researched and created a biographical profile for every one of the 65 men, and one woman (a nurse), from Genesee County who had died in service during World War One. The project encompassed eight binders, about 100,000 words of biographical text, and newspaper articles and archival documents pertaining to each person. Terry also delivered over 1,200 military documents (Burial Case Files) photocopied over the course of four visits to the National Archives in St. Louis, and two to the World War I Museum’s archives in Kansas City. In his words, it was Terry's way of bringing those soldiers “home,” or at least of keeping their memories alive. "Too often memorials are merely lists of names; I wanted to put some flesh and blood in those names" he said. The entire project, including all eight binders with complete soldier profiles, the 1,200 military file documents from the National Archives, related source documents and unit histories on disc, are available to anyone for viewing at the Genesee County History Department in Batavia, New York. For more information, contact the Genesee County Historian, at the department. In March, Terry will be launching a website and a related blog that will include all the profiles, as well as chronological posts, about Genesee County during the war. The topics will include both the home front, and the native sons and daughters in service. We will post the website link when it becomes available. Terry spent some time with us, and shared his story.

This is an amazing 6-year research project. Tell us about what you did. What did you envision for it? 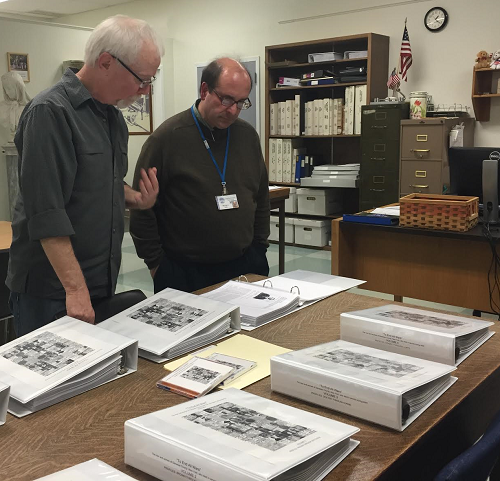 Terry Krautwurst (left) at the Genesee County (NY) History Department, with his submitted research project. In 2015, just before Memorial Day, I delivered to my home county’s (Genesee County, NY) history department a six-year project I’d just completed about the 65 soldiers and one woman (a nurse) from Genesee County who had died during the war. The project encompassed eight binders, about 100,000 words of biographical text, and newspaper articles and archival documents pertaining to each person. I also delivered over 1,200 military documents (Burial Case Files) photocopied over the course of four visits to the National Archives in St. Louis, and two to the World War I Museum’s archives in Kansas City.

Originally, I was simply trying to learn more about what my grandfather, Stanley Crocker of Le Roy, NY, did during World War I. He seldom talked about it. All I knew was that he’d been in the war, and all I had to start with was an old panoramic photograph of him with the men in his unit, labeled “Battery D, 307th Field Artillery, Camp Dix, NJ” that I’d inherited from him. As kids, we used to point and laugh at some of the men in the photo—there was one with a bulldog face, another that resembled Goofy, and so on. So really, it just started from there.

One thing I learned fairly quickly was that my grandfather, and most of the other 100-plus men in that photo, were all early draftees from my home county and two adjacent counties in western New York—and that within about six months virtually all had been transferred from the 307th Field Artillery, which was in the 78th Division, to other divisions and units. My grandfather ended up serving in France with Company E of the 117th Ammunition Train, 42nd (Rainbow) Division. Others served in nearly a dozen other divisions and engineering units. Soon I found myself researching not only my grandfather’s role in the war, but the parts that all the other men in that photo played, too.

Then I discovered that several of the men who had started out in my Grandfather’s original unit had not survived the war—so I began examining honor roll lists of county casualties that had been published in area newspapers during and just after the war. That’s when the project really grew.

As I studied the honor roll lists, I noticed discrepancies. Some were understandable. It’s not surprising, for example, that a list of casualties published early in the war would have fewer names than one published later. Likewise, it’s hardly inconceivable that a name or two might have been overlooked or inadvertently dropped on any given list. 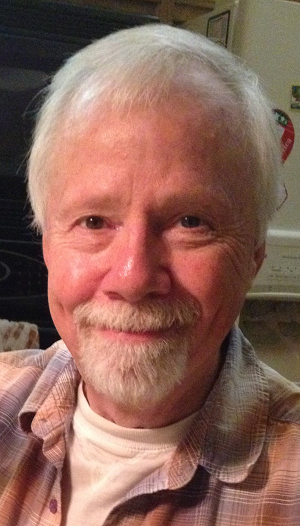 Terry KrautwurstBut I found puzzling differences even when I focused only on the four most complete Genesee County honor roll lists I could find, all published well after the war. Not only was the total number of individuals on each county list different, varying from 52 to 61, but the names on the lists varied as well. Some soldiers appeared on one or more lists but not on others. Surprisingly, when I compiled all the names from all the lists, allowing no duplicates, the total was considerably higher than that of any single list: 78!

How could there be such differences? Was it possible that no single list accurately reflected the true magnitude of Genesee County’s losses in The Great War?

It seemed only right and proper to set the record straight, so I set out to research and resolve the discrepancies and produce an updated and perhaps more accurate accounting of Genesee County’s World War I dead. I figured it would take me about a month.

Are you a self-taught historian? How did you go about doing this extraordinary research? What was your process?

If I’m a self-taught historian, this project was my school; I’ve learned by doing. I spent nearly my entire working life as a writer and editor, specializing mostly in science and nature. Fortunately, along the way, I developed a pretty good set of research skills that have helped me with my World War One work.

As far as the process goes, that was one of my first real lessons as I tried to sort out the discrepancies in those honor rolls: one thing leads to many others. As I sorted through old newspaper articles and censuses in an initial effort to determine whether a given individual on a given list was indeed from Genesee County (it turned out that some were not, thus resolving several of the discrepancies), I soon learned that there were other contradictions among the lists. Hometowns, unit designations, dates and causes of death sometimes varied as well. To solve those mysteries, I turned to additional sources: unit histories, military records, postwar government reports, Federal, and state archives. 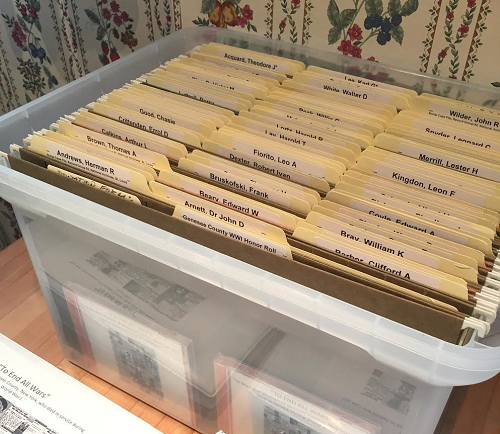 Individual record files compiled by Terry Krautwurst for the the 65 men, and one woman (a nurse), from Genesee County who died in service during World War One.Sometimes those sources yielded information that resolved discrepancies; sometimes they simply produced additional puzzling contradictions. But they almost always did something else: they told me more about the person than just the bits of basic honor-roll information I’d originally sought. A census, examined to establish an individual’s hometown, might also list his or her occupation, parent and sibling names, a street address. A service summary used to confirm a soldier’s unit might also yield his enlistment date and place, other units he served with, the date he sailed overseas. A newspaper article announcing a soldier’s death might state not only when he died, but where he attended school or worked, his friends’ names, his burial place, hints of his personality. A unit history might include not only his name on a casualties list, but also insight into what he was doing, and where he was, in the days and moments before his death.

Almost without knowing it, I’d begun to gather together bits and pieces of information about each person’s life that, over the course of nearly a century, had become scattered by the winds of time—and that threatened to become only more scattered, perhaps lost altogether, in coming years.

I decided to pull those scattered bits together, to preserve each soldier’s story as best I could.

So my project became not just an updated honor roll list, but also a series of profiles of the individuals from Genesee County who died in service during World War One. What started out as a one-month inquiry turned into a six-year obsession.

What kind of memorable turns, or surprises did you uncover through your research?

My first trip to the National Archives in St. Louis was a revelation. Sadly, most Army personnel records from World War One and Two were destroyed in a fire at the original archives building in St. Louis in 1973. But a different set of records pertaining to deceased soldiers, called Burial Case Files, were not at the archives at that time and were moved to St. Louis to their new facility only fairly recently.

It was truly a humbling experience to examine those files. In most instances I was looking at materials that no one had touched in decades. In some cases the documents included eyewitness accounts of a soldier’s death, or heart-rending letters from a fallen soldier’s parents or widow. Every once in a while, I’d open a file—and find the soldier’s identity tag (later called dog tags). 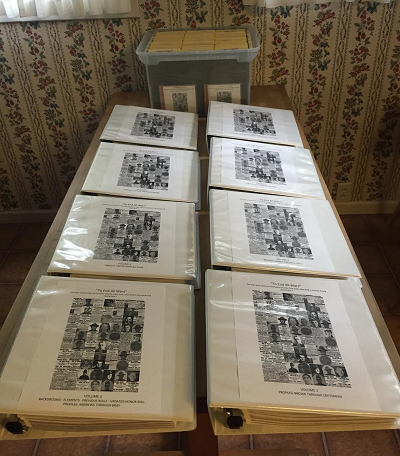 The binders holding the information Terry Krautwurst collected on the 66 military members from Genesee County who lost their lives in World War One.Easily my biggest surprise came as a result of researching one county soldier who had shipped overseas with my grandfather and had died of diphtheria shortly thereafter. Some sources said he died in France, while others said he’d died in England, at Morn Hill rest camp, near Winchester, where tens of thousands of American soldiers stopped on their way to France. I started corresponding with a woman in Winchester who helped me find the man’s death certificate, proving he’d died there. She mentioned that the city was preparing an exhibit about the camp as part of Britain’s Great War Centennial, and needed material about American soldiers who’d passed through.

My grandfather had written about the camp in his diary, so I sent her some excerpts and a photo. To my delight, he was selected to be in the exhibit—and to my great surprise, for my birthday my wife and sons gave me tickets to England to attend the exhibit, which was in Winchester’s Great Hall, an ancient castle and home of the Round Table! Even better, when we arrived at the exhibit, we found that my grandfather had been chosen to represent all the American soldiers that had passed through the camp. That was a very gratifying day for me.

Why did you do this? Why was this effort important to you? World War One happened 100 years ago, and many see it as a forgotten war. Why do projects like this matter?

It started out as a sort of homage to my grandfather, and it still is to some extent. When I discovered that none of the previous honor rolls were accurate, I simply wanted to set the record straight out of respect. And then, as I researched the soldiers and gathered bits and pieces about their lives and deaths, I realized the enormity of their sacrifices—and the fact that they were right on the edge of forgotten. I just didn’t want that to happen.

It was my way of bringing my home county’s casualties “home,” or at least of keeping their memories alive. Too often memorials are merely lists of names; I wanted to put some flesh and blood on those names. I hope that the profiles and updated honor roll help to remind present and future generations of the sacrifices made by these individuals, and by so many others from Genesee County who responded with courage to the Great War’s challenging times.