Under the auspices of the Community of Communes of the Pays d'Issoudun, a commemorative ceremony will be held on Sunday, June 25, 2017, named "Centenary of the Arrival of the American aviators in Pays d'Issoudun" at the monument to the American dead of Volvault (Commune of Paudy), in the presence of the French and American authorities. The honors will be rendered by the music of the Air Force of Bordeaux (40 musicians), and a detachment from the Avord base. 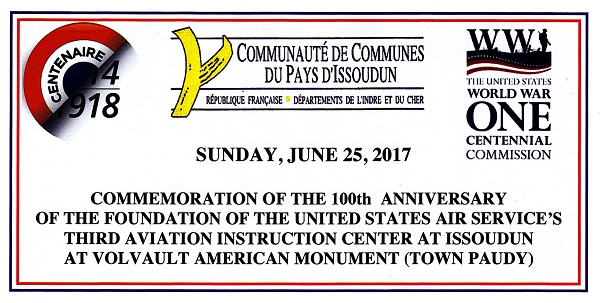 After the passage of the Patrouille de France and the raising of the American and French colors and the execution of the national anthems (the Star-Spangled Banner and the Marseillaise), a wreath with 171 flowers made by the children of the communes placement in honor of the dead of the '3rd center of instruction of the Aviation of the United States' will be laid on the stele that honors the aviators.

As a prelude to the commemorative day, there will be ten days of Franco-American friendship: conferences, exhibitions, concerts, film screenings, and educational activities (history, civic education, human rights).

History of the 3rd American Aviation Training Center in Issoudun, 1917-19

On 6 April 1917, exasperated by the torpedoing of their ships, the United States declared war on Germany and joined the Allies in the First World War.

As early as the month of May, there was talk of the creation of an American air force in the Department of Indre, and in the Champagne Berrichonne there were officers of the American General Staff inspecting the lands likely to be suitable for them.

Arrival of the Americans in 1917

On July 31, about 2,000 "sammies", armed, arrived by the road from Bourges to Issoudun. The history of the 3rd Aviation Training Center of the United States Air Service began.

Seven camps and eleven airfields formed the 3rd Aviation Training Center, which was commanded by Captain Spatz (later General Spaatz) from 15 November 1917 to May 1918, Lieutenant-Colonel Walter G. Kilner for one Month, then again Captain Spatz until August 30, 1918 and Lieutenant Colonel Hiram Bingham (discoverer of Machu Pichu) from August 31 to December 1918.

This center, which was the most important of the nine American aviation centers, was used for the training of pilots and their development in pursuit, shooting and observation.

All the camps were located in the communes of Lizeray, Saint-Valentin, Ménétréols-sous-Vatan, Paudy and Issoudun:

Visit of the highest personalities

On March 16, 1918, General Pershing, Newton D Baker, U.S. Secretary of War, Clemenceau, and General Joffre arrived at Issoudun around 7:00. in the morning. Their special train stopped at the station of Villement and was sent immediately to the Rouze airfield, from where they left for Paris at 1 pm, after admiring some beautiful figures of flight, formations, simulations of combat, acrobatics, and other demonstrations. It was not the first time General Pershing had visited the camp.

Hiram Bingham, Commander of the 3rd A.I.C. was invited by the municipality of Issoudun to share the honors of victory.

The Treaty of Versailles sounds the departure of the Americans.

From January 1919, the Peace Conference was held in Paris, which culminated in the signing, on 28 June 1919, of the Treaty of Versailles, which ended the war with Germany. From then on, it was clear that the American soldiers were going to leave France.