Edith Cavell: A reluctant martyr of World War One

Edith Cavell became one of the greatest martyrs of World War One, and her heroic story was shared throughout the Allied countries as a shining example of patriotism. It even helped influence popular opinion in the United States against Germany, and promoted its eventual entering the war. Yet, her real life contradicts the patriotic legacy that was created after her death. 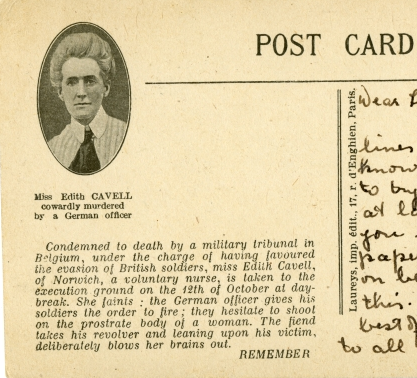 A postcard that promoted the martyrdom of Edith Cavell in graphic detail.Before the war broke out, Cavell worked in a nurse training school in Brussels, Belgium. She heard news of the war while visiting relatives in Britain, and came to one of most important conclusions of her life: “At a time like this, I am more needed than ever.” Thus, she returned to Brussels as a nurse.

She was known for nursing any soldier, regardless of nationality. After German forces captured Brussels in August of 1914, Cavell chose to stay behind at her hospital while most of the other nurses fled. She also helped more than 200 Allied soldiers escape into neutral Holland. In addition to soldiers, Cavell also smuggled intelligence back to the British, but this remained a state secret until after her death. She was arrested by the Germans in August 1915 for assisting the enemy, after the Germans discovered letters revealing Cavell’s involvement with sending soldiers and intelligence out of Belgium. German interrogators then tricked her into making a full confession by telling her they already knew everything, and that she could only save her friends who were arrested for the same crimes if she confessed.

During her trial she refused to lie in order to save herself, and confessed again. This resulted in her being sentenced to death. Diplomats from Spain and the United States, both neutral countries at the time, tried to commute her sentence, but to no avail.

On October 11, 1915, the evening before her execution, she famously said: “I realize patriotism is not enough. I must have no hatred or bitterness towards anyone.” In saying this she was revealing her belief that it is important to help and respect anyone, regardless of their nationality or their uniform. She was executed the next morning by a German firing squad in Brussels. Her body was taken back to England, and a memorial service was held for her in Westminster Abbey. 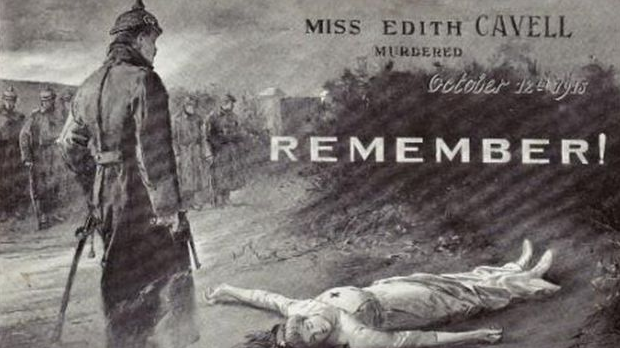 Propaganda was spread throughout the Allied countries about Edith Cavell’s death at the hands of the GermansHer death was covered by the press across the world, and caused a wave of anti-German sentiments in the U.S. and Britain. She was portrayed as a martyr that had been ruthlessly executed by the Germans simply because she was was saving lives. The British press even went so far as to nickname her their “Joan of Arc,” and she became the focus of many propaganda campaigns. The circulation of her story resulted in an increase in the number of volunteers signing up for the British Army, and became a rally cry for the Allied cause. It also helped to ferment anti-German opinions across the world, and was featured in some American publications.

The story of her life was therefore molded by the United Kingdom to become a symbol of patriotism. So much so that a statue of her in London contains the phrase, “For King and Country.” This has sparked some controversy since Cavell herself advocated that “patriotism is not enough,” and we must rise above nationalistic views so we can “have no hatred or bitterness towards anyone.”

Kate Lyons was a 2016 Summer Intern at the World War One Centennial Commission.