By Josh Cotton
via The Warren, PA Times-Observer

For Mark Nickerson, the Presidential Inauguration was a chance to see history. 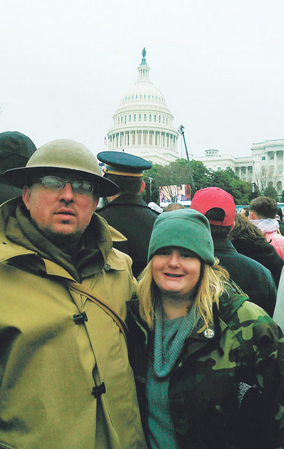 Mark Nickerson and his wife, Sara, at the Presidential Inauguration in Washington D.C.But also a chance to be history.

The long-time reenactor, and owner of Nickerson Military & Sporting Collectibles in North Warren, was going to go to the inauguration after procuring a trip from Congressman Glenn Thompson.

But when the opportunity presented itself for Nickerson to work with the US World War I Centennial Commission, a ‘Doughboy’ he became.

As a member of the Great War Association, a World War I re-enacting group, Nickerson said he received an email from the Commission back in November that the Commission was “going to be taking part in the inauguration, handing out poppy seed packets.”

The packets include information about the Commission’s main effort to raise funds for a national World War I memorial.

Nickerson said World War I is the only war that doesn’t have a national memorial in the capital. There is a World War I memorial on the National Mall but it’s tucked away in the woods and is dedicated only to the men from DC who died in World War I.

So inauguration day found Nickerson and his wife, Sara, at Union Station handing out seed packets.

According to a statement from the Commission, poppy flowers “are a traditional symbol of veteran remembrance. The custom began 100 years ago, during World War I, with the worldwide popularity of the poem In Flanders Field.”

“It was an interesting crowd,” Nickerson said. “If you want to see how many different types of people are fellow Americans, go to a presidential inauguration.”

“The most touching moment I had during all of that, a gentleman, probably in his 50s or 60s, a husband and wife, asked if he could have a picture with me,” Nickerson said.

Nickerson agreed and learned that the couple had four sons – all served in the military. One died in Iraq, another was wounded in Afghanistan and two remain in the service.

“That really made up for the protesters that were anti-government, anti-establishment,” he said. “It was very much a counterpoint.”