"They remember that the Yanks showed up when they were needed"

Historian Mike Hanlon has been a WW1CC volunteer since the Commission's earliest days. He has been a frequent contributor to our weekly Sync Call, and social media postings. He is also a noted Battlefield Tour Guide, and has led dozens of tour groups and official staff rides through the major sites in France, Belgium, and Germany. His latest effort includes a battlefield tour of Italy, to visit World War I battles sites -- including where the U.S. Army's 332nd Regiment fought side-by-side with Italian troops, and where noted writer Ernest Hemingway served as an ambulance driver. The Italy trip will take place in 24 July-3 August 2017. Those who are interested in more information may reach out via email: greatwar@earthlink.net. Mike shared information about the upcoming trip with us.

Mike Hanlon, you have a special battlefield tour coming up. Tell us about it. 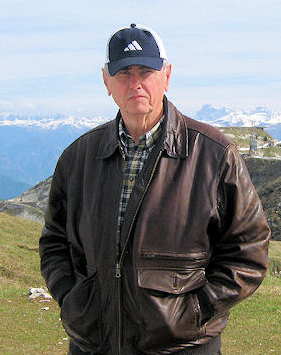 Mike HanlonUsually, my battlefield tours focus on the Western Front, but this year to commemorate the centennial of the Battle of Caporetto, the most important action on the Italian Front, I will be taking our group on a comprehensive reconnaissance of that battle, including its prelude and aftermath. We will be traveling to Austria, Slovenia and Italy, and surprisingly for many I think, we will be including an American battlefield in the itinerary.

Not many people are aware of the U.S. role in Italy during World War I. What units were there? What did they do? What was the impact?

After the battle, which was a catastrophe for the Italian Army, the other Allies were asked to send reinforcements and whatever help they could. The story of the American volunteers like Ernest Hemingway and John Dos Passos, is well-known, but the American military showed up as well. Aviation units and medical units were deployed, but most visible was the 332nd Infantry of General Pershing's 83rd Division (mostly men from Ohio). They were a great boost to Italian morale, showing that America was deeply committed to the Allied cause. They showed the flag in many communities and participated in the final Battle of Vittorio Veneto pursuing Austro-Hungarian forces. Our group will follow their advance and cross the Tagliamento River where they saw the most fighting.


What specific sites will you visit, and what specific stories will you be highlighting, on this tour? Is this the area where Ernest Hemingway served as an ambulance driver? 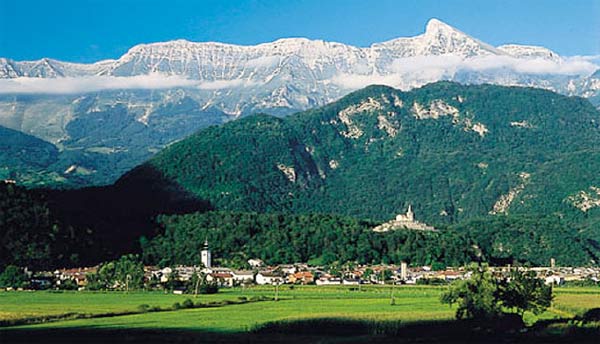 KobaridThe centerpiece of the tour is the battlefield of Caporetto, which is one of the world's most spectacular, both for the mountains of the Julian Alps, and the beautiful Isonzo River Valley. However, to place the battle in context, we will begin with a study of sites south of Caporetto ("Kobarid" in Slovene) where 11 early and mostly futile preceding battles were fought. The treatment of Caporetto also includes following the line of retreat to the mountaintop bastion of Monte Grappa and the Piave River.

It was on the Piave River where Ernest Hemingway was wounded and we will be visiting that site. He is probably the American most associated with the Italian Front, followed by future New York Mayor Fiorello La Guardia, who was an aviator there. The trip concludes with the Allied victory offensive in which the Doughboys participated with the Italian Army, as well as British Tommies and French Poilus. 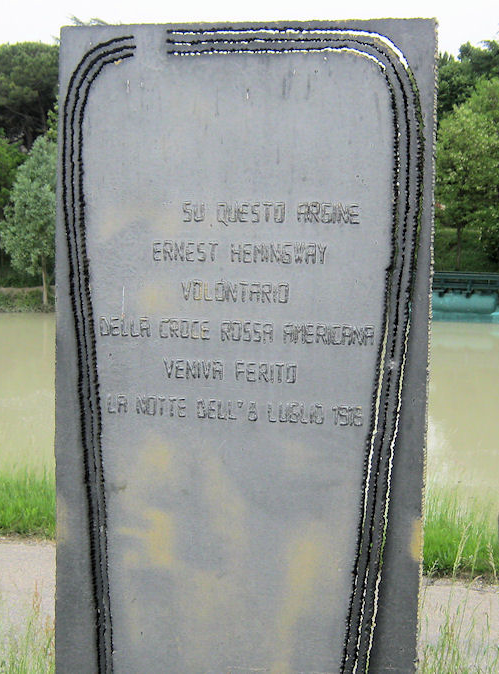 Stone marker at the site where Ernest Hemingway was wounded on July 8, 1918

Is the war still part of the local culture, in present-day, as it is in the French and Belgian battlefield areas? How do they remember the war? Is it important to them. Is the American role remembered?

Yes, just like Verdun and Ypres on the Western Front, the battlefields of Italy are well preserved and cared for and there are high quality museums and dramatic memorials to visit. The local folks – individuals and organizations – are proud of their history and very appreciative of visitors. They remember that the Yanks showed up when they were needed.