"You can't fully appreciate the world's current conflicts without understanding how the Great War ended."

The U.S. Army's 82nd All-American Division is celebrating 100 years by telling their story through an innovative series of videos & podcasts. The 82nd Airborne Division Public Affairs Officer, LtCol Joe Buccino, took some time to tell us about their great new project.

Your legendary 82nd Airborne Division is having an important birthday! Tell us about it, and a little about the WWI history of the All-America Division. 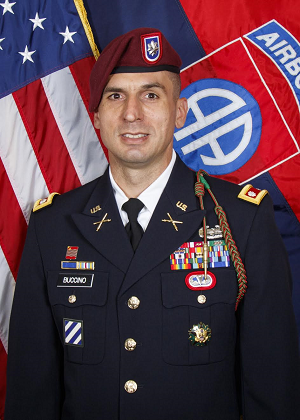 LtCol Joe BuccinoOur division, the 82nd Airborne Division, is largely known for its WWII airborne assaults in Sicily, Salerno, Normandy, and Nijmegen. However, our history and many of our traditions go back to World War I. Long before it was airborne, the 82nd was formed for entry into WWI in August, 1917 on Camp Gordon, Georgia. We participated in the Western Front's critical moments, held the right flank in the Battle of Saint Mihiel, and fought in the Argonne forest. And, of course, the war's most prominent Soldier, Alvin York, was in the 82nd.

We were a bit unique from the start: the Division was formed from recruits and conscripts from the south: Alabama, Florida, and Georgia in particular. Much like every other division, we were initially a homogenous organization with Soldiers from the same area. Then, in the fall of 1917, the War Department pulled thousands of Soldiers out of the 82nd to fill the new units popping up all over the country. Within the 82nd, these Soldiers were replaced by draftees and volunteers from all over the country. This was new: here was a Division that represented the full breadth of the American culture. Thus, the nickname "All American."

In fact, approximately twenty-percent of the Division's Soldiers were foreigners. If you read the first-hand accounts from the Meuse-Argonne Offensive, Soldiers in the Division had difficulty communicating in the forest due to the diversity of accents, American and otherwise.

What are you folks doing to mark the occasion?

2017 is a yearlong celebration of our legacy. The podcast will go all year and that is a big effort for us to tell the stories of our All American Soldiers and Paratroopers. In May, the 22nd through the 25th, we'll spend a week honoring our century of service with All American Week 100. Tens of thousands of our alumni and supporters will congregate at our base here on Fort Bragg. It's going to be an incredible celebration with historic remembrances, displays of our capability, athletic competitions, and an airborne operation. We've got many other ideas we're working on and we'll release them once they are fully developed.


Tell us about this great new video & podcast series. Was it made by your soldiers?

Well, it's a podcast first and a video second. The All American Legacy podcast was developed for iTunes. We're making each episode available on YouTube as another way to get these stories out. We want to make these as easy and accessible as possible.

Yes, the podcast was made by a small group of us here in the 82nd Airborne Division public affairs office. Stagg Sergeant Will Reinier and I developed the concept about six months ago. It's an awful lot of work but it's a labor of love; we're proud of the product and we feel it's important to tell these stories.

We release a new episode every Tuesday morning and the program is available in a number of ways. First, you can subscribe on iTunes http://apple.co/2iE81rZ. If so, iTunes will automatically download each new episode as it becomes available. You can also listen via Google Play at tiny.cc/AALPGooglePlay or Stitcher at tiny.cc/AALPStitcher. Finally, you can find all the episodes on YouTube: https://www.youtube.com/user/82ndAirborneDiv1.

We hope people continue to listen. We've got a few episodes left on WWI and then we move on to WWII and beyond. On Tuesday, February 7th, we will release what we feel is our best episode on the Triple Nickels, the all-black paratrooper battalion formed during WWII. We're releasing the episode as a tribute to African American History month. It's always timely but we feel we really captured an important American moment and a compelling story. If you love World War I, keep listening: we've got a rich history that spans the last century.

Why do this? World War I happened a long time ago, is seen by many as a forgotten war. Why is it important to mark this birthday, and to remember what American soldiers did in World War I?

I think you said it: the country seems to have forgotten WWI. The Great War is largely overshadowed by WWII, which is a tragedy. In fact, you can really only understand the causes of WWII and strategy therein by understanding WWI. When you think about Meuse-Argonne, it's largely unknown to the broader American culture. This was one of the most important, deadliest campaigns in global history, a colossal clash of tactics and strategy. But understanding World War I is even bigger than Meuse-Argonne.

That war shaped global history in the way 9/11 shaped modern history. It fundamentally changed American society, the way we view one another and the way we view the world outside our borders. I don't think anyone can fully understand today's foreign policy debates without understanding Wilsonian ideals of isolation and intervention. You can't fully appreciate the world's current conflicts without understanding how the Great War ended.

We're just putting the material out there. We hope we've done this in a compelling way and people relate to it. If so, we hope they keep coming back.