Art made on the front lines of the First World War

At the centennial of America’s entry into World War I, the National Air and Space Museum is offering a rare view of the conflict by artists who became soldiers and soldiers who were amateur artists. 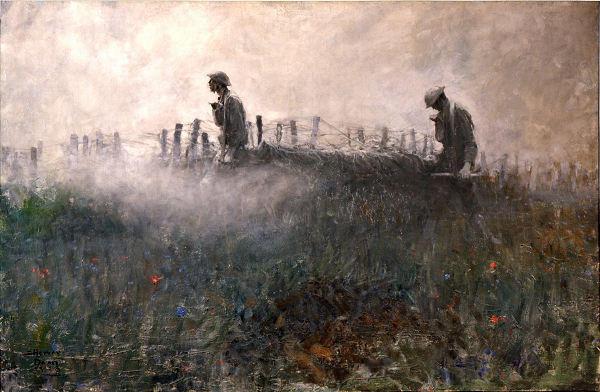 "On the Wire" by Harry Everett Townsend. (Smithsonian's National Museum of American History)“Artist Soldiers: Artistic Expression in the First World War,” opening April 6, will showcase more than 100 pieces of art and artifacts — many never displayed in public — that depict realistic scenes of life on the front and in the civilian life surrounding it.

Central to the exhibition are 54 works from the American Expeditionary Forces, part of a collection of about 500 owned by the Smithsonian National Museum of American History. Pieces from the collection have been exhibited only once before, almost a century ago.

“These works are significant in that they represent a turning point in so-called war art,” said Peter Jakab, chief curator at the Air and Space Museum. “Prior, you’d see paintings of heroic figures, painted long after the battle.”

But the AEF commissioned eight artists and embedded them in battle. “They were given free rein to paint not only combat scenes,” Jakab said, “but also life at the front, scenes of personal activities. And what this gave us was a sort of capturing the war in the moment, by the firsthand participants.”


Read the whole article on the Washington Post web site.