World War I: From Red Glare to Debonair 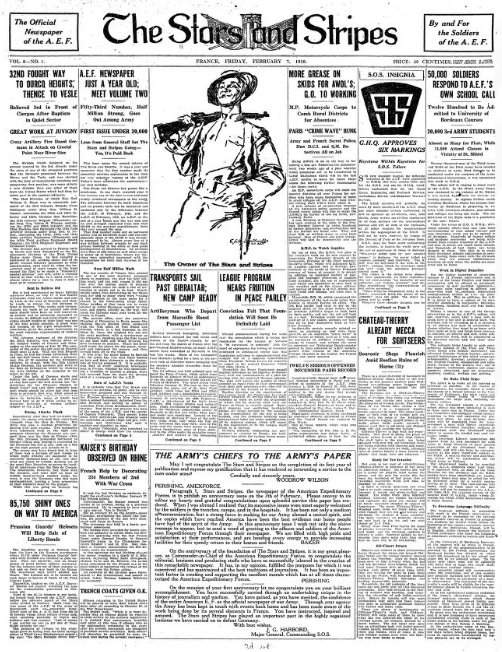 The Stars and Stripes, February 7, 1919.With its more than 90-year history, most Americans are aware of the military-based newspaper “The Stars and Stripes.” But many don’t know that it came into existence as a morale-builder after Americans surged into France during World War I – and even fewer probably know of its links to another august publication, “The New Yorker.”

As thousands of Americans braved mud, bullets, shells, mustard gas and the flu in the killing fields of France, a decision was taken to start up a newspaper that could bring news of the war and of home to the men of the Allied Expeditionary Force. By most reports, it was a Second Lt. Guy T. Viskniskki, a longtime newsman, who took the idea to the brass and talked them into it; he was among the first writers and editors of the publication that launched Feb. 8, 1919.

The handful of enlisted men who began cranking it out insisted that it be written with flair and cover the things the average guy in a foxhole would want to know about. As its editors stated in the initial number:

“With this issue, The Stars and Stripes reports for active service with the A.E.F. It is your paper, and has but one axe to grind—the axe which our Uncle Sam is whetting on the grindstone for use upon the august necks of the Hapsburgs and the Hohenzollerns ... we want to hear from that artist in your outfit, that ex-newspaper reporter, that short-story writer, that company ‘funny man,” and that fellow who writes the verses. We want to hear from all of you—for The Stars and Stripes is your paper, first, last, and all the time; for you and for those of your friends and relatives for whom you will care to send it.”