"America had ascended the world stage and our Doughboys knew that they had 'placed' us there."

Meet Doug Batson. You have never seen his mix of world-class talents before. He is a living history performer, a former military geographer, and an expert in the geography of World War I. He brings these passions together when he does performances portraying Dr. Isaiah Bowman, then-Director of the American Geographical Society (AGS). In January 1918, President Wilson tapped Dr. Bowman to lead "The Inquiry," a group of distinguished geographers who served as a precursor to today's National Intelligence Council. With its vast collection of maps and reports, The Inquiry propelled America onto the world stage at the 1919 Paris Peace Conference -- and together, they developed President Wilson's Famous "14 Points".

Few people discuss 'WWI geography', but it is considered to one the most impactful elements of the war. Give us the rundown on this topic, especially for during the war, and during the peace afterwards.

Military innovations of WWI famously included aeroplanes and tanks, but these novelties were seldom deployed in combat. Soldiers in the trenches, however, quickly recognized that the game-changing danger was geographic intelligence used in targeting indirect artillery fire. For the first time in warfare, enemy positions on maps were converted to precise geographic coordinates to unleash hellacious barrages, at times laden with poison gas, that none who survived them would ever forget. Former farmer Captain Harry S. Truman attended a French artillery school in order to instruct U.S. Army gun crews to perform these lethal mathematical calculations. 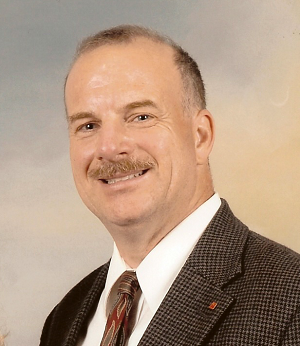 Doug BatsonThe Progressive President Woodrow Wilson firmly believed that American-style liberal democracy was the panacea needed by a world gone mad with war. The Bolshevik Revolution and Russian withdrawal from WWI afforded Wilson his chance. When Britain and France failed to articulate revised war aims, looking ahead to the peace process, Wilson set forth his own---the famous 14 Points.

Wilson envisaged a scientific and rational peace undergirded by geographic knowledge backed up by immense and accurate data sets. The State Department clearly lacked the capacity to give the U.S. delegation any such clout at the ensuing Paris Peace Conference. Wilson, the only U.S. President with an earned Ph.D., requested help from academia, and "the Inquiry," a think tank for reconstructing a shattered world in U.S. interests, was immediately formed.

How? The American Geographical Society (AGS) offered its NYC building at 156th Street and Broadway, as well as staff to include its Director, Dr. Isaiah Bowman, to the Inquiry without charge. Its numbers eventually swelled to 150. "Never before had there been gathered together so large a body of men engaged in public service of an international character."

Dr. Bowman's mastery of historical, political, and economic geography steered the research and production of volumes of ethnic maps and human geography reports that not only informed the American commissioners in Paris, but also favorably impressed foreign delegations once skeptical of naive Americans dabbling in world affairs. 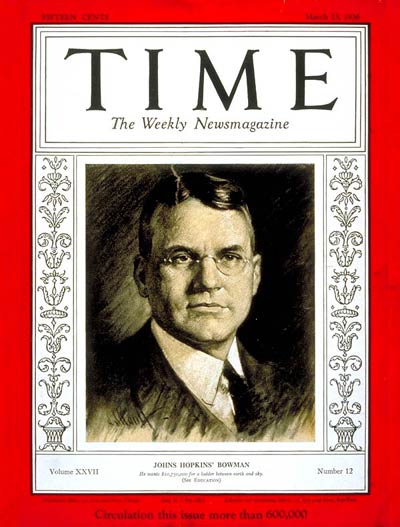 Mapping ethnic geographies was a completely new cartographic enterprise, and Dr. Bowman made quite a name for himself and for his profession as Woodrow Wilson's geographer. The Ruthenians, Rumelians, and Silesians of a century ago are akin to today's Houthis, Hazara, and Yazidis: ethnic groups in conflict that few Americans had heard of. Self-determination reflected in new national boundaries would make the Great War a war to end all wars, and Paris a Peace Conference to end all conferences. Wilson's ideological agenda for Paris proposed a League of Nations with war itself to be outmoded, perhaps even outlawed.

Tell us about your connection to this important topic, and about your research process. How did you become an expert? How does today's intelligence gathering/analysis compare with that of WWI? What memorable/interesting surprises did you find in your WWI geography research?

In the film Schindler's List, Oskar's estranged wife asks if the secret to his sudden career success was just dumb luck. No, he answered, not luck but war. Oddly, it was the same for me. Nineteen years into my staid Federal career, the Global War on Terror catapulted me from an obscure family support policy specialist for the INS to a thought leader on geographic peace-building in Afghanistan. My part-time career as an Army Reserve sergeant had included training in a Turkic language and at the Defense Mapping School, and those skills were suddenly in high demand. Thus, in mid-life, I improbably became a human geographer with the National Geospatial-Intelligence Agency (NGA).

"Every development of the art of war calls for the more extended use of maps," Bowman once quipped. My proposal to the Office of the Director of National Intelligence won a coveted research fellowship. I authored a book that, like Bowman's 1928 The New World, hallmarked my geography career. In it I introduced a land administration model then under development to depict customary land tenures on maps. In 2012, that model became ISO 19152, a new standard since also adopted by the U.S. Intelligence Community.

My book was favorably reviewed by current AGS Council Chair Christopher Tucker, and Lt. General (Ret.) Michael Flynn, my former Brigade Commander and now President's Trump's National Security Advisor. But it was then-AGS President Jerome Dobson, who, during my research year, pointed out the pivotal role that Dr. Bowman had played to elevate cultural geography in both World Wars and its subsequent demise. I happily found myself a player in the resurgence of human geography in U.S. intelligence. But revisiting Dr. Bowman's ethnographic mapping has not been without controversy. As Dr. Dobson can attest, AGS-sponsored Bowman Expeditions to gather such data have been roundly criticized. Cold War "cloak and dagger," HUMINT espionage has long run its course. Much of the data needed to support policy decisions and military operations is, as it was 100 years ago, again ethnographic in nature and in the hands of academicians. Some are just more reticent about sharing it than others. 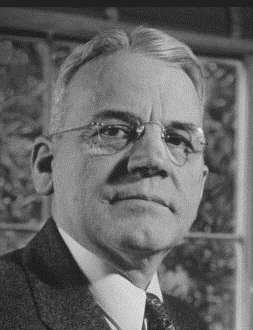 Dr. Isaiah BowmanIn reading up on WWI for the centennial, I came across three new facts. First, a "neutral" U.S. in 1917 had massive economic investments in Allied nations, 100 times greater than with Germany. Surely there was a vested interest in the war's outcome. Second, recent European immigrants to NYC offered the Inquiry members geography books in native languages as well as their accounts of how autocratic Kaisers had blunted nationalistic fervor. And the third fact is related: the new political maps emanating from the 1919 Treaty of Versailles evinced the fullest evolution of nation states, which had begun with the 1648 Treaty of Westphalia.

You have a great way to impart these stories to audiences. Tell us about your reenacting/living history project. Whom do you portray, and what stories do you tell?

As a native Virginian and Son of Confederate Veterans member, I had attended dozens of Civil War tours and symposia. Yet, for the Civil War Sesquicentennial, I wanted to actively contribute. I thought that I could best do so as a living historian and joined a Gettysburg-based club. While I have great regard for reenactors, who camp out and drill together with an array of authentic accoutrements, my camping days ended when I retired from the Army Reserve! A colorful historical character was needed, one who was significant, but also one with whom I had affinity and no one else had portrayed. Maverick Confederate General Daniel

Harvey Hill fit the bill. Donning period clothing and using Hill's actual correspondence, I wrote six first person impressions to chronicle his feisty exploits. Although far less colorful, Isaiah Bowman is my guy to portray for the WWI centennial. As with D. H. Hill, who was a Christian writer and educator, I also share affinity with Dr. Bowman. We both delayed our academic careers for four years following high school: Bowman taught school in rural Michigan and I served as a Cavalry Scout in Cold War Germany.

The U.S. Defense and State Departments project U.S. power by dividing up the world into Areas of Responsibility based on regional geography. At Yale, Professor Bowman taught the first regional geography college course in the USA. The Inquiry's base maps, many at 1:250,000 scale, are the predecessors of Joint Operational Graphics (JOGs), the regional maps used for military planning & operations. I made many an acetate overlay on these maps during Operation DESERT STORM. Both Dr. Bowman and I learned the German language and became regional geographers: he for Latin America and I for the Turkic world. I was active with the American Association of Geographers' Military Geography Specialty Group; Dr. Bowman immersed WWI Army officers in geography at the AGS. The two seminal books I have already mentioned.

My initial, first-person impression of Bowman is set in January 1918. At the AGS building, he gathered together the Inquiry's initial members and spoke to them about their destiny to create a "scientific" new world order with the USA as its moral guide and economic lead.

Why is this important to you? Why do you care? WWI happened so long ago, and some people consider it to be a forgotten war. Why do these stories matter?

I attended the 1997 Veteran's Day parade in San Diego in which some of the last centenarian former Doughboys waved at us onlookers. I thought of how as young men, they had waved to cheering crowds on New York's harbor docks while embarking to France---"Over There."

WWI is very much a forgotten war. Compared with WWII, few Americans can name a battle, campaign, field commander or other personality. The conflict itself, yes, but more so the Paris Peace conference ushered the USA onto the world stage. That era is central to American history and stories best convey that import. I like to remind today's audiences that in the 1990s, this generation of Americans actually experienced the post-war economic boom (from post-Cold War globalism and ICT), the fruits of world peace and American ascendancy that Wilson and Bowman had expected to see in the 1920s. Their hopes were dashed by isolationism at home, the rise of fascism in Europe, and the Great Depression. Our hopes, while not dashed, have been tempered by challenges to American mercantile and politico-military hegemony since 9/11/2001: no peace in Iraq and Afghanistan, the rise of terrorist non-state actors like ISIS, and the Great Recession.

While watching on TV the 2016 Summer Olympic Games I often heard the chant "USA!, USA!" as our nation once again pulled away in the medal count, and I smiled wryly. The same smile was undoubtedly on the faces of triumphant WWI American soldiers upon returning home from "Over There." America had ascended the world stage and our Doughboys knew that they had "placed" us there.

In 2016, Douglas Batson retired from 34 years of Federal service. He was assigned to Germany for 12 years and there earned a B.S. in geography 100% by exam from Excelsior College, a Ed.M. in Human Services from Boston University, and the German language diploma of the Goethe-Institut. In Operation DESERT STORM, Doug was decorated with the Bronze Star medal. He was the 2014 recipient of the American Association of Geographers' M.F. Burrill award for excellence in geographic research and policy.