It is early fall in 1918. Imagine being an American service member crouched down in the shrouded mists of a northeastern French valley, deep in the Argonne Forest. 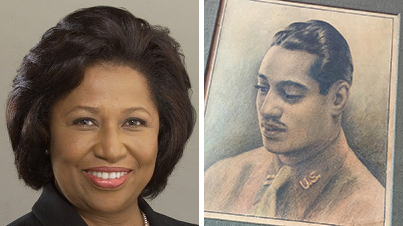 Carol Moseley Braun and her grandfather, World War I veteran Thomas Davie.German gunfire erupts as mortar rounds land nearby. You inch forward toward the enemy with soldiers from France and Belgium on either side of you. The brutal fighting would last nearly six weeks, until an Armistice was reached between Allied Forces and Germany on Nov. 11, 1918.

Five million Americans served their country in uniform during World War I, including 2 million deployed overseas. Nearly 117,000 Americans would make the ultimate sacrifice in a battle that would change the political, global, and social order of the U.S. and its allies – reasons why this war shouldn’t become a forgotten one.

More than 350,000 African-Americans served during World War I. Overcoming racial hostilities, these brave men demonstrated through their service, love of country, patriotism and the importance of equality. The paradox for African-Americans fighting on the front lines in France was clear; they defended America’s freedoms abroad while being denied those rights at home.

Although the Civil War ended 50 years before World War I began, racial discrimination was common throughout most of America. Jim Crow laws enforced a culture of segregation. African-Americans faced prejudice from their white counterparts in the service and in civilian communities near stateside military bases.