"The best at secure communications gains a great advantage"

Cryptology was a huge part of the World War I effort, yet the story is one that is not widely known. Lou Leto, of DC's National Cryptologic Museum, reached out to us the other day to tell us about the activities that they are planning for the World War I Centennial. These activities include some interesting new exhibits, and fascinating public programs.

The National Cryptologic Museum is a really unique place, and tells a unique story of World War I. Tell us about your mission, your facility, and your World War I-related exhibits. 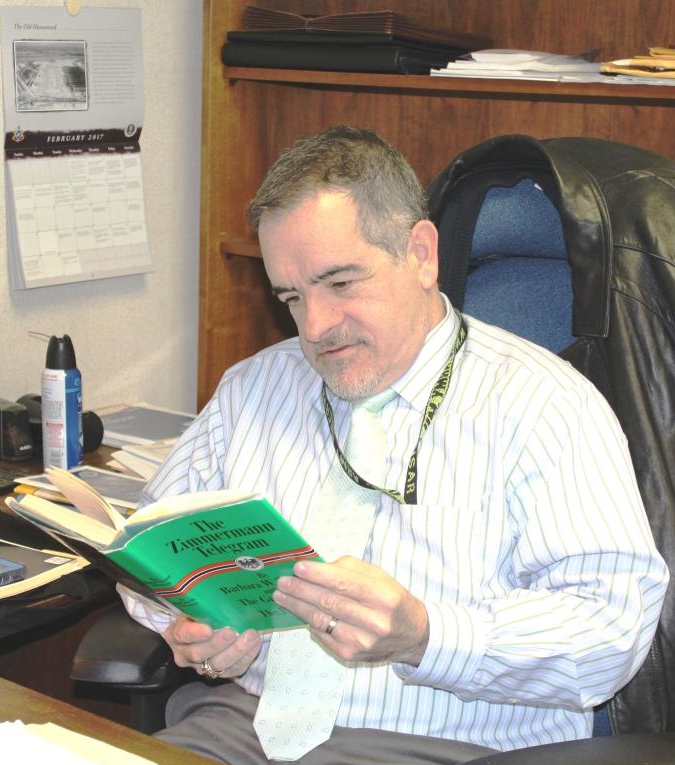 Lou Leto of DC's National Cryptologic MuseumThe National Cryptologic Museum is the National Security Agency’s principal gateway to the public. It shares the Nation's, as well as NSA’s, cryptologic legacy and place in world history. Located adjacent to NSA Headquarters at Ft. George G. Meade, Maryland, the museum houses a collection of thousands of artifacts that collectively serve to sustain the history of the cryptologic profession. Here visitors can catch a glimpse of some of the most dramatic moments in the history of American cryptology: the people who devoted their lives to cryptology and national defense, the machines and devices they developed, the techniques they used, and the places where they worked. For the visitor, some events in American and world history will take on a new meaning. For the cryptologic professional, it is an opportunity to absorb the heritage of the profession.

Originally designed to house artifacts from the Agency and to give employees a place to reflect on past successes and failures, the museum quickly developed into a priceless collection of the Nation's cryptologic history. The museum opened to the public in December 1993 and quickly became a highlight of the area.

Being the first and only public museum in the Intelligence Community, the National Cryptologic Museum hosts approximately 70,000 visitors annually from all over the country and around the world, allowing them a peek into the secret world of code making and code breaking.

The museum has been featured in a plethora of international TV, print, and radio media and has hosted visitors and dignitaries from around the world.

The museum houses several exhibits and displays dealing with the cryptologic aspects of World War I. They include the Zimmermann Telegram, the World War I Radio Intercept Site, and the Native American Code Talkers. Each has a unique and important story to tell about America’s role in The Great War. The Zimmermann Telegram exhibit, for example, highlights how a decoded message changed the course of history. The exhibit of the intercept site is important in telling the story of radio communications and interception. Signals could be intercepted without being in close proximity to the transmitter or transmission lines and could provide vital information about enemy tactics and strategy. As World War I was the first time messages could be sent using radio, the U.S. Army Radio Intelligence Section used their newfound capabilities to “spy” on enemy conversation.

The Zimmerman Telegram was a major reason for the U.S. to enter World War I. Tell us about what happened, and why it was so important. 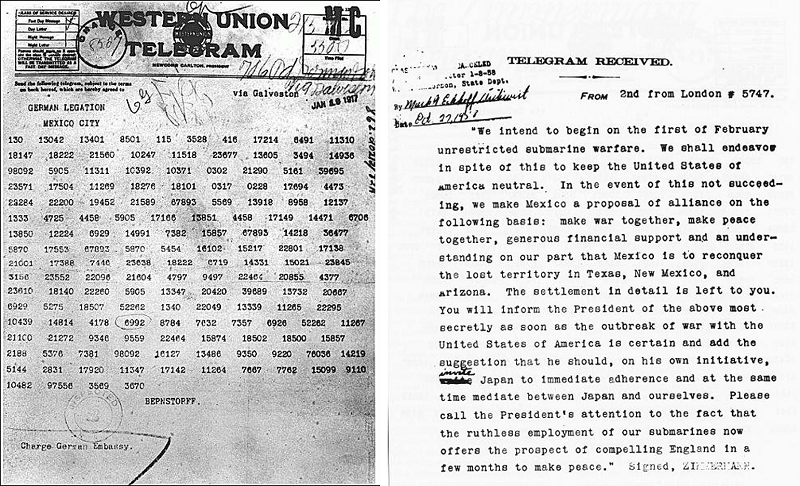 The Zimmermann Telegraph and decoded versionZimmermann Telegram is the primary example how a decoded message could change the course of history, as it did during World War I. The Germans planned to cut off supply lines to Britain and France by beginning unrestricted submarine warfare in the Atlantic. Fearing the United States would join the war if their ships were sunk, Germany asked Mexico to start a war with the United States and promised the return of Texas, Arizona, and New Mexico after Germany won the war. The message also said that Germany indeed would begin unrestricted submarine warfare in the Atlantic on February 1. It further raised the possibility of inviting Japan to join the war against the United States. The telegram was sent on January 16, 1917, from the foreign minister in Berlin, Arthur Zimmermann, through the German ambassador in Washington, D.C., to the German ambassador in Mexico City, in the form of a coded message. It became known as "The Zimmermann Telegram." Britain intercepted the message as it was transmitted overseas. Royal Navy cryptanalysts in what was called Room 40 decoded and showed the message to the United States. President Wilson was furious when he learned the news, which made its way to the Associated Press. Once it hit the newspapers, the American people were outraged. Wilson, who had run on a campaign of peacemaker and keeping the United States neutral during the war, asked Congress for a declaration of war against Germany on April 2. Congress declared war on Germany on April 6, 1917. Thus, a single coded message, and the efforts of cryptanalysts, changed history.

As you mentioned, your museum also tells the story of the original Native American Code Talkers of World War I. Tell us about who they were, and what their role was. Where did they serve? What was the outcome of their efforts? How did it translate & transition to World War II? 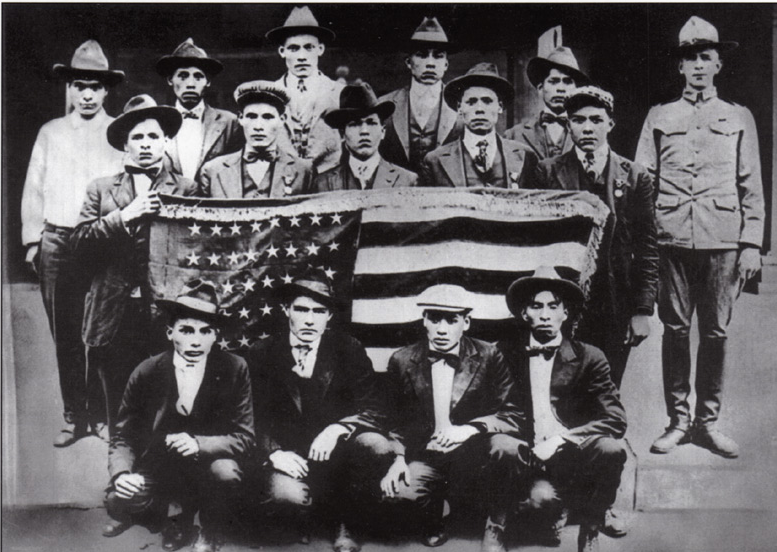 Choctaw Code Talkers in training during WW1With radio now being the new means to communicate on the battlefield, voice security became paramount in WWI. Enter the code talkers. The first known Native American Code Talkers were from the Choctaw Nation. Assigned to the Army’s 142nd Infantry Regiment, 36th Infantry Division, their first use was in October 1918 in the Argonne Forest. A company commander of the 142nd, Capt. Lawrence, was walking through the camp and heard Cpl. Solomon Louis and Pfc. Mitchell Bobb speaking a strange language. It was Choctaw. He got the idea of using their tongue as a weapon against the enemy. To do so they quickly had to develop a system in which they could communicate English military terms that did not exist in their language. For example, “big gun” was used for artillery, and “little gun shoots fast” was a machine gun. Having suffered losses attributed to German intercept of U.S. Communications, the 36th Infantry mobilized eight Choctaws to provide secure voice security.

The result was a success. More Choctaw were then trained followed by Native Americans from other tribes. Use of the Native American Code Talkers caught the Germans by complete surprise. Col. A.W. Bloor, commander of the 142nd Infantry Regiment, gave credit to the code talkers in helping two companies from the 142nd safely withdraw from the front line at Saint Etienne, France, in October 1918. He also credited them for a surprise attack that led to the capture of Forest Ferme the next day. Boor said, “The enemy’s complete surprise is evidence that he could not decipher the messages.”

As World War II raged, voice security was still a problem. The best systems were used only at the highest levels, but there was nothing for tactical voice communications. The Army started using the skills and services of the Choctaw once again. They added the Comanche, Winnebago, Pawnee, Kiowa, Cherokee, Navajo, and other tribes to their arsenal with success in the European and North African Theaters. The Marine Corps went exclusively with the Navajos. Their use of code talkers was stimulated by the success the Army had in WWI and now in WWII. Philip Johnston, who served as a Marine in WWI, grew up on a Navajo reservation and could speak the language fluently. From his experience in WWI, he knew the great advantages of code talking. After demonstrating the strengths of code talking to Marine Corps leadership, he was given authorization to build the program that included more than 420 Navajo code talkers that made a difference between victory and defeat and between who lived and who died in major battles in the Pacific. Iwo Jima was but one example of where code talkers directed fire to save American lives and defeat the most stubborn enemy they had ever faced. 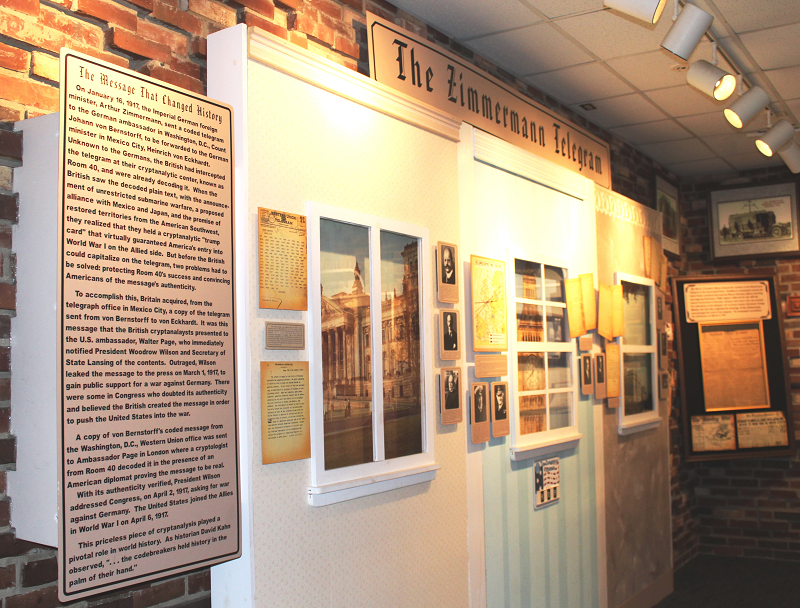 Germans came to the United States between the wars to learn Native American languages and culture. They were unsuccessful. The languages, many which were unwritten and some were tonal. The languages had to be acquired as a small child to learn them fluently. The Germans were unable to do this. Code talkers hurt the Central Powers in WWI, and they would do the same against the Axis Powers in WWII.

How are these World War I stories relevant today? Why are they important to remember, and to study?

The stories of the code talkers show us the importance of ingenuity and determination. Sometimes the answers to the most pressing problems are right in front of us. As Capt. Lawrence did, we only need to use our senses to recognize them and allow others to use their minds to create resolutions. As difficult as it was for the cryptanalysts in Room 40 to decipher the Zimmermann Telegram, it was their determination to discover its contents and then convince the American leadership of its potential dangers to the free world that changed the course of history. These characteristics of ingenuity, determination, and the will to make the right decisions in the face of adversity, are as important today as they were in WWI and back to the times of Alexander the Great! 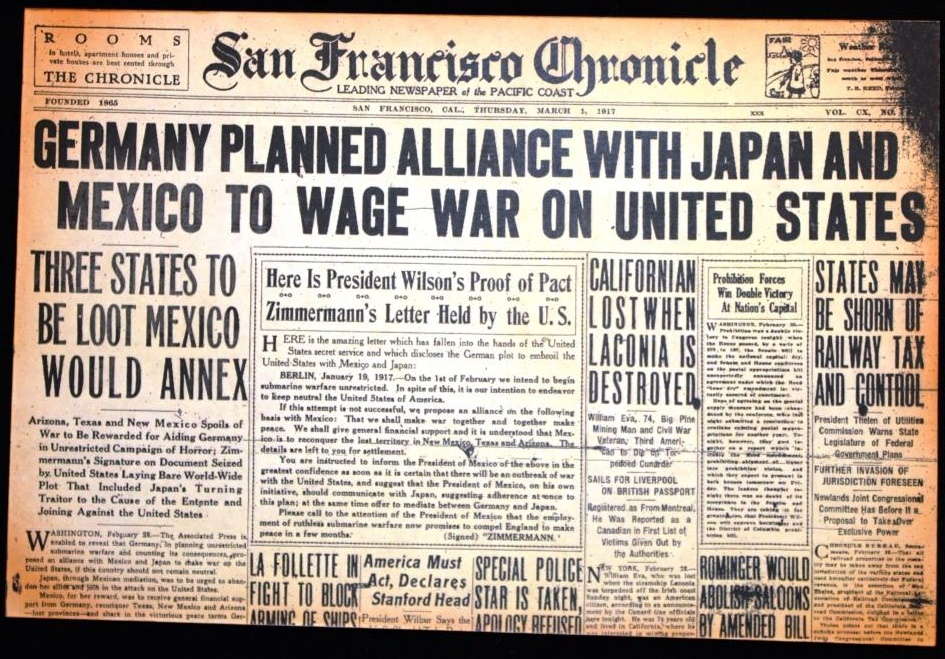 The Zimmermann telegram was big news in 1917