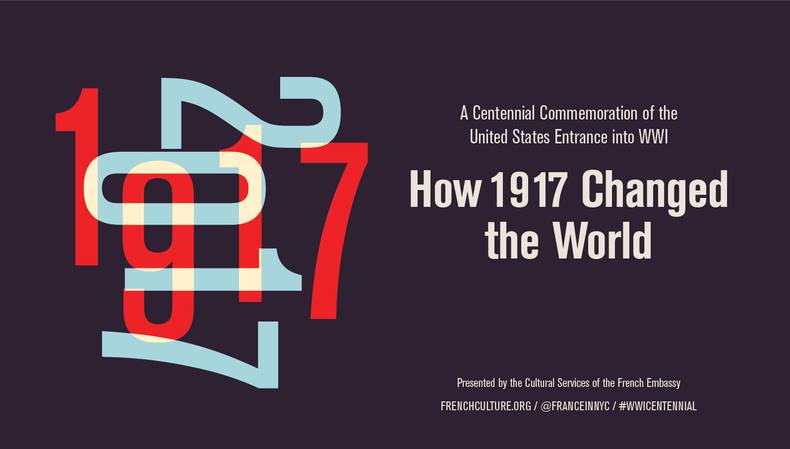 One hundred years after the United States entered World War One, the French Embassy seeks to shed light on this momentous occasion through a series of exhibitions, talks, concerts, and screenings beginning in New York City and continuing across the US throughout 2017. The program aims to familiarize younger generations with this transformative moment by exploring the ongoing impact of the cultural and aesthetic upheaval of the period and uncovering untold stories of communities that were instrumental to this critical period of history.

Kicking off a major nationwide centennial commemoration this spring, the French Embassy has assembled a series of events in New York City as part of a yearlong program “How 1917 Changed the World”. Centennial activities will continue throughout the year from Boston to Chicago and Atlanta.

As the events of this year demonstrate, the friendship between the United States and France has been both central to the preservation of democracy around the world and a driving force behind a long, remarkable history of cultural and artistic creativity. It is our honor to commemorate the sacrifice made by the American soldiers who participated in the war and to celebrate the enduring bond between France and the United States that has helped shape our world over the last hundred years.

Presented by the Cultural Services of the French Embassy with support from The French Mission du centenaire de la Première Guerre mondiale, in charge of the World War One Centenary in France. This program is endorsed by The U.S. World War One Centennial Commission as a commemorative partner, which recognizes commitment to educating the public about World War One and honoring those who served.

These are the events & links:

“Artistic Revolutions and the Great War”

On March 27th at 7pm, Albertine Books will host a discussion about how 1917 reshaped the notion of art and still influences our representations.

Yale historian Jay Winter, jazz expert Philippe Gumplowicz, Surrealism and French literature specialist Mary Ann Caws, Adrian Sudhalter, Art Historian, curator and a specialist in European art between the World Wars and French artist Melik Ohanian, winner of the Prix Marcel Duchamp 2015, will examine the artistic and literary revolution of 1917, and the continuing impact of these events in the present with a particular focus on how artists deal with issues of war and collective memory.

“America in a Time of War: City, Economy and Politics in World War I and after”

On March 30 and 31, Columbia University organizes, in the presence of French Ambassador to the United States Gérard Araud, a colloquium which will focus on New York's role as a source of material and financial support, beginning in 1914 and continuing through the United States' entrance into the war.

Conference registration is free but required in advance. 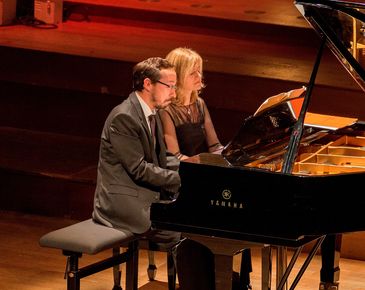 On April 5th at 7pm, Le Poisson Rouge will host a concert in tribute to Paul Wittgenstein, a pianist that has been badly wounded during WWI and commissioned pieces to play with only one hand afterwards.

In homage to Paul Wittgenstein —the concert pianist who lost an arm in World War I and commissioned piano concerti for the left hand alone— musicians will perform Le Tombeau de Couperin (1917) by Ravel, a piece dedicated to Ravel’s friends who died in battle, and Suite pour 2 violons, violoncelle et piano op.23, a piece commissioned by Paul Wittgenstein. 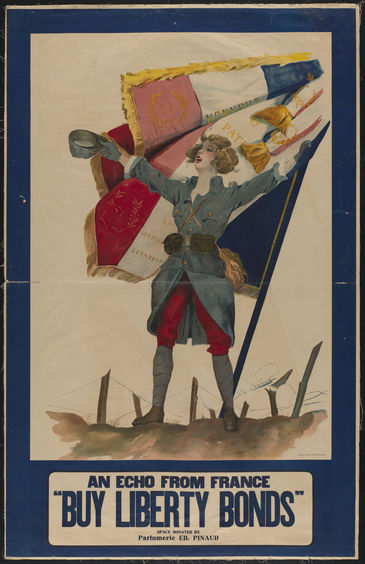 On April 5th at 6:30 pm, the Museum of the City of New York will host a discussion about the connections between propaganda posters from WWI and current design works.

Inspired by the exhibition Posters and Patriotism: Selling WWI in New York and the 100th anniversary of the U.S. entry into World War I, a panel of leading graphic designers, Seymour Chwast, Laurie Rosenwald, and Paula Scher, moderated by Donald Albrecht, co-curator of the exhibition, will discuss a selection of rarely-exhibited propaganda posters—and consider parallels in the world of graphic design and illustration today.

“Posters and Patriotism: Selling World War I in New York at The Museum of the City of New York”

When the United States entered World War I in April 1917, New York City's artists and illustrators were enlisted in the war effort. Many of them worked for the federal government’s new Division of Pictorial Publicity. Posters and Patriotism: Selling World War I in New York examines the outpouring of posters, flyers, magazine art, sheet music covers, and other mass-produced images created by these New Yorkers to stir the American public to wartime loyalty, duty, and sacrifice.

From the outbreak of the European conflict in 1914, however, New York had also been a city at war with itself—a place where debates about ethnic and racial loyalty, pacifism, the right to side with France, Belgium, and England or Germany, and the very meaning of patriotism spawned impassioned art for a mass audience. In rediscovering a wartime dialogue between images of conformity and dissent, Posters and Patriotism showcases over 60 examples from the World War I poster collection donated to the Museum by railroad executive and financier John W. Campbell (1880-1957) in 1943, most being exhibited for the first time, as well as the work of defiant artists in such colorful publications as The Masses, The Fatherland, and Mother Earth. 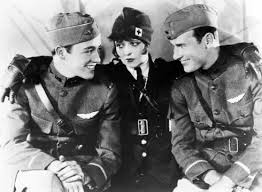 A special screening of Wings, William Wellman’s epic masterpiece, paired with a live US premiere performance of the musical score featuring France’s Prima Vista Quartet musical score by Baudime Jam supplemented by Matthias Champon on trumpet and Cédric Barbier on percussion. One of the last great films of the silent era, Wings won the Academy Award for Best Picture at the first-ever Oscar Ceremony in 1927. Featuring spectacular stunts, classic melodrama, and iconic actress Clara Bow, Wings tells the story of mismatched lovers set against the backdrop of the Battle of Saint-Mihiel in the Mse.

This screening will kick off a U.S. tour with stops in Minneapolis, Chicago, Washington D.C., and Saint Louis.