Four new exhibits on World War I open April 6th at the Smithsonian National Museum of American History in Washington, DC, on the day of the centennial of the United States entry into the Great War.

The First World War remade the world geopolitically and transformed how societies engage and relate to military conflict.

Artistic expression during the war contributed to this transformation. Before World War I, war art largely depicted heroic military leaders and romanticized battles, done long after the fact, far from the battlefield. The First World War marked a turning point with the appearance of artwork intended to capture the moment in a realistic way, by first-hand participants. 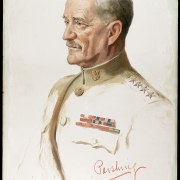 This exhibition examines this form of artistic expression from two complementary perspectives: one, professional artists who were recruited by the U.S. Army; the other, soldiers who created artwork. Together they shed light on World War I in a compelling and very human way.

General John J. Pershing insisted the United States military have an independent American army on the ground when the U.S. entered the Great War. By recreating Pershing’s war office, this display will give the visitor a sense of America’s global reach and influence in World War I and reveal how the U.S. fit into a reshaped global community.

Uniformed Women and the Great War

Of the many ways World War I divided the past from the future, none was more significant than the reordered place of women in society.

Tens of thousands of middle- and upper-class women donned military-style uniforms to serve at home and overseas in civilian relief organizations, as well as in the military.

The selection of uniforms on display will highlight the varied roles of uniformed women that allowed them to express their patriotism.

Modern Medicine and the Great War

World War I provided a testing ground for the application of new medical technologies and procedures, and in some cases accelerated their general acceptance or development.

At the same time, wartime medical practice reflected the larger concerns and prejudices of early 20th-century America, as the country coped with ever more complex problems of modern industrial society.

Before the advent of radio and motion pictures, art and illustration were the primary forms of mass communication. With the outbreak of World War I, governments, militaries, and service organizations hired artists and illustrators to depict the ravages of war and to rally patriotism. Poster imagery created before and during American military participation was used to mobilize citizens to enlist, give aid to refugees and soldiers, and motivate any and all people to join the fight through rationing, buying bonds, or charity work. The small selection presented here gives glimpses of the war front, illustrates participation on the home front, reveals the new roles of women, demonstrates new technologies, shows the breadth of military service, and depicts America’s allies and enemies at that time.