LONDON – In the UK on April 6th, there was a special commemoration event at the Guildhall, the ceremonial and administrative centre of the City of London. The event was attended by U.S. Embassy Chargé d'Affaires Lewis Lukens. 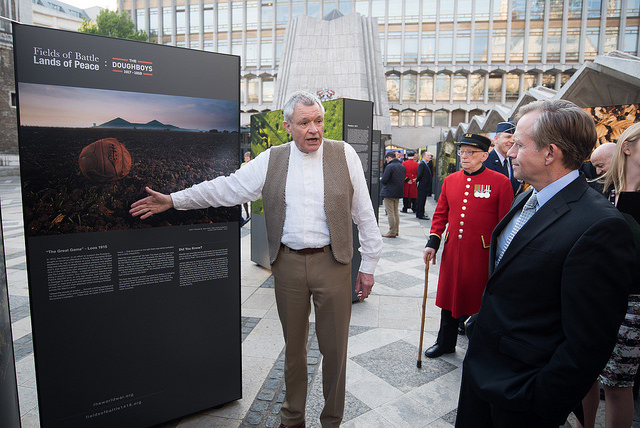 Reception and commemorative event held at London's Guildhall, to mark the 100th anniversary of U.S. involvement in World War I, attended by U.S. Embassy Chargé d'Affaires Lewis Lukens (right)The event was linked to a new photographic exhibit called "Fields of Battle, Lands of Peace: The Doughboys 1917 - 1918." "Fields of Battle" is scheduled to show from 7 - 23 April at the Guildhall Yard in London.

Embassy Chargé d'Affaires Lukens stated, "World War I laid the foundation for the close ties between the United States and the United Kingdom. Many people point to the Second World War as the start of the special relationship... but I would argue that the seeds of this incredibly close and important partnership were planted in 1917."

American soldiers, or ‘Doughboys,’ and their entry into the First World War in 1917 provide the focus of this major new exhibition. It portrays the battlefields which, 100 years ago, were places of death and horror, now revealed by the photographer as landscapes of great beauty and tranquility.

Lukens also shared a personal connection to the war: 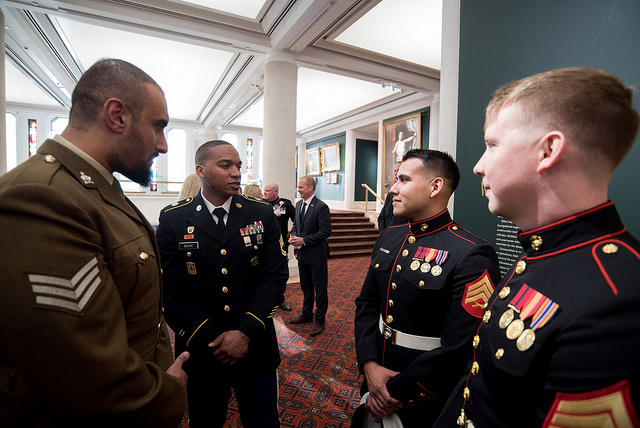 Military members from the U.S. and the U.K. talk during a reception and commemorative event held at London's Guildhall, to mark the 100th anniversary of U.S. involvement in World War I. "Both my grandfathers fought in that war. My British grandfather lied about his age and was shipped over to fight in Gallipoli at the age of 15. When his true age was discovered he was sent home to England where he worked in a munitions factory until he turned 18 and joined the Royal Flying Corps, later the RAF. He trained in Egypt and flew in Palestine and Syria until the war ended in November 1918.

"Also, my American grandfather, and his two brothers, shipped over from the US in the summer of 1918 and fought in France. I am proud of the sacrifices by these earlier generations from both our countries, and grateful that our nations continue to work closely together, side by side, for peace and prosperity."

The exhibition is the latest in an acclaimed series of centenary photographic exhibitions, created by Michael St Maur Sheil, to document the battlefields of the First World War as they are today. It has been commissioned and curated by the National World War I Museum and Memorial in the United States and is supported by the City of London Corporation.

The exhibit was produced in partnership with: the City of London; Fields of Battle, Lands of Peace: The Doughboys; National World War I Museum and Memorial; US Embassy to the UK.