By Matthew Cox
via Military.com

WASHINGTON –The U.S. Army paid tribute Thursday to the 100th anniversary of the American military entering World War I, a move that would cost the lives of nearly 117,000 Doughboys. 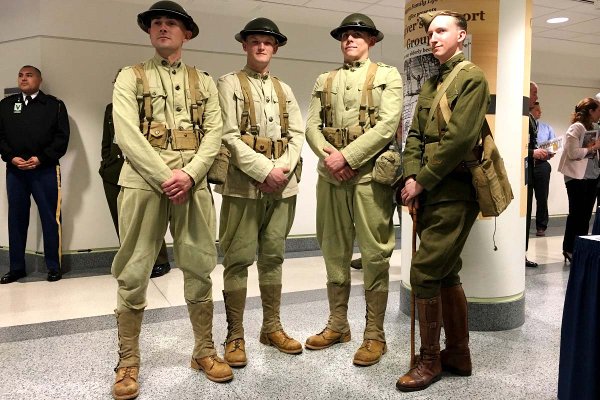 Soldiers from the 3rd U.S. Infantry Regiment, "The Old Guard," dressed in World War I-era uniforms.A modest ceremony at the Pentagon marked the decision by Congress on April 6, 1917, to declare war on Imperial Germany for its campaign of unrestricted submarine warfare.

Period art and recruitment posters flashed on two digital screens, offering such slogans as "The Pep of the Yankee Boy," "We've called the Kaiser's Bluff" and "Berlin or Bust."

Soldiers from the 3rd U.S. Infantry Regiment, "The Old Guard," dressed in World War I-era uniforms. The U.S. Army Chorus sang "It's a Long Way to Tipperary" and "Over There."

The event marked the beginning of a national campaign that will culminate Nov. 11, 2018, when the World War I Centennial Commission is scheduled to dedicate the National World War I Memorial in Pershing Park in Washington, D.C.

The decision to enter the war mobilized American society. Nearly five million Americans entered service. It resulted in more than two million new industrial workers, while women became a major presence in the workforce and joined the armed forces.

Of the 4.8 million Americans who went into the military, four million served in the Army.

The 99 divisions that made up the American Expeditionary Forces entered the front lines in January 1918 and fought in 13 key battles such as Cantigny, Belleau Wood and the Meuse-Argonne Offensive. 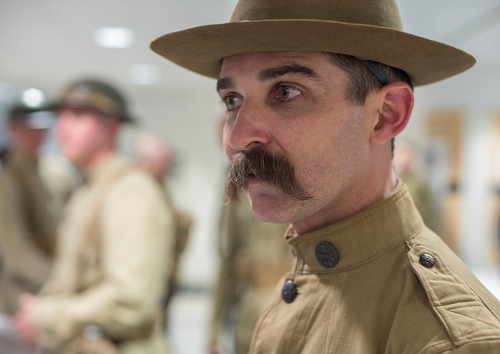 The April 6, 2017 presentation at the Pentagont was complete with exhibits and re-enactors. "If you have ever served at Fort Benning, Fort Bragg, Fort Dix, Fort Jackson or Fort Lee, you have served at one of the 87 camps and installations built by the Army in 1917 or 1918 as part of the wartime mobilization," said Charles Bowery Jr., executive director of the Center of Military History. "If you served in the armor, aviation or chemical branch, your branch was created in World War I."

Frank Buckles would become the last American Doughboy to pass away in 2011. He was 110 years old.

"We are obligated to remember the sacrifice and service of all those who came before us," said Army Chief of Staff Gen. Mark Milley, who recalled two great uncles who served in the Great War.

One served in the Canadian Army and fought at Gallipoli and later in the Battle of the Somme, Milley said. The other fought with the 26th Yankee Division of the Massachusetts National Guard.

"Any historian will tell you that World War I was a catastrophe. It was a global bloodletting" that resulted in about 38 million civilian and military casualties, Milley said.

"I think all of us, especially here in the Pentagon, need to take time and reflect," he said. "I think we owe it to five million Americans and those four million soldiers that wore the uniform of our nation.

"We owe it to every one of them. Even though none of them are alive today, we owe it to all of them to clearly and unambiguously understand what World War I was about, how it started and vow, vow upon their graves to never let it happen again."