At least 200 people from the small city of Lawrence MA died in World War I – the exact number is not known – and 352 died in World War II. As many as 19,000 men and women from the city may have fought in the two wars. Next month, City Councilor Marc Laplante from Lawrence will fly to France for an eight-day trip through five ABMC cemeteries in France and Luxembourg where 45 of the Lawrencians killed in the two wars are buried. At each of the graves and memorials, Laplante will plant the city of Lawrence's blue and white flag. The city's local newspaper helped raised about $1500 to purchase the city flags and the four wreaths to lay at the walls of the missing. He will also bring a resolution from the city of Lawrence, and resolutions from the Massachusetts Secretary of Veterans Affairs, the Governor, and the U.S. Congresswoman representing Lawrence, MA. At the request of the ABMC, Laplante said he also will leave copies of newspaper obituaries and other records about the 51 service members. He'll also leave resolutions the Lawrence City Council is expected to pass on Tuesday commemorating the service members and recognizing the work of the agency, the American Battle Monuments Commission. We talked with Council Member LaPlante about this important effort to honor those veterans.

You have a special Europe trip planned. Tell us about it -- how did the trip come about? What do you hope to see & do? 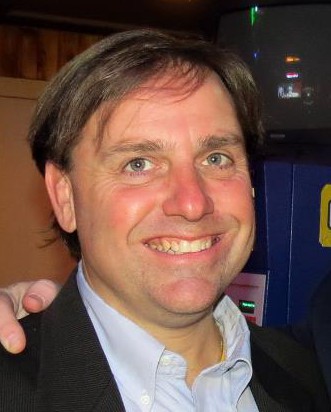 The trip came about after a conversation with a WW1 buff who visited Europe several times and recommended a book to me about a Lawrence, MA company that fought in the Great War. It intrigued me that when these boys returned home from a brutal war they became the city officials and business leaders whose shoulders I stand on today as a city councilor.

That conversation and book sparked my interested in visiting France. Then using my capacity as a elected official, and with the help of Congresswoman Nicki Tsongas' office, I started making plans to visit France and to acknowledge and pay official tribute to the boys from my city who are buried in the ABMC cemeteries.

Also, being from French/Canadian ancestry and learning about my ancestors migration from France to the United States via Canada, I decided to include my wife and school aged children on the trip so that we can all learn more about our origins and the sacrifices made during the world wars that protected our liberties and freedoms.

A big part of the trip will include visiting five ABMC cemeteries and placing a City of Lawrence flag on the grave sites of each of the 46 WW1 and WW2 soldiers/sailors buried in France and Luxembourg, and remembering those 6 Lawrence soldiers whose names are listed on the Walls of the Missing. I will also present a city resolution to the director and the staff at each cemetery thanking them for their service as the caretakers of these graves. For each day prior to the trip, I prepare and post on Facebook a short bio about a Lawrence soldier/sailor that I will recognize during my time in France. During these 52 days, through the research and photos, it's almost as though my trip has already begun.

Tell us about the World War I heroes that you hope to visit. Who were they? What roles did they play in the war? 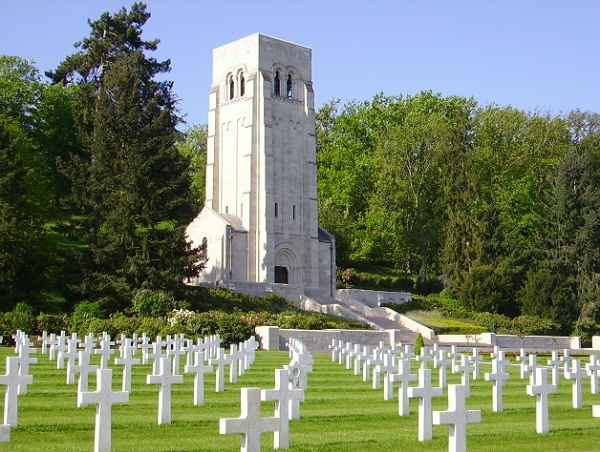 Aisne-Marne American Cemetery and Memorial in FranceI will be visiting Meuse-Argonne, Oisne-Aisne and Aisne-Marne cemeteries where 30 sons of Lawrence are buried and 2 boys are listed on the Walls of the Missing. In my city, we have schools, parks and street corners named after many of the boys who fought and died in WW1. Several are buried in France with parks named after soldiers such as Edmund Costello (Park), Edward Devlin (Field) and Phillip O'Connell (South Common). A grandson of a former mayor (Alexander Bruce, named after his grandfather) was a pilot who died in combat. He is also buried there. I am looking forward to visiting their graves. I am also looking forward to visiting the graves of those who received medals of distinction:

Frank Alekno - He was born in Russia on August, 1887 in Russia. According to the official report, "(W)hile a member of a patrol of three men on April 21, 1918, he attacked a hostile patrol of seven men, and although fatally wounded continued in action until the hostile patrol was driven back and the officer commanding it, with a non-commissioned officer was killed. Although mortally wounded he carried a message for assistance to a point 200 yards away." He received a Distinguished Service Cross. There is no official honor in my city, but based on this research, we will find an opportunity to dedicate a corner in his honor. He is buried at Meuse-Argonne American Cemetery.

Edward Devlin - He was born on May 8, 1894 at Dover, NH. According to the official report, he was awarded the silver star citation "for gallantry in action in the Belieu Bois, France, October 25, 1918. While in charge of the squad...(he) was furiously attacked by an enemy patrol bent on capturing prisoners. All of his men were wounded....Corp. Devlin, single-handed, stood his ground, fighting with consulate courage and determination, and although he himself received wounds from which he later died, he succeeded in rescuing one of his wounded comrades from the hands of the enemy, and held his position until relief reached him." He is buried at Meuse-Argonne American Cemetery.

Lawrence Fielding - Born on June 18, 1893 in England. According to the official report, He was awarded the Croix de Guerre with gilt star, January 5, 1919. "From October 3-9, 1918 near St. Etienne-a-Arnes, as liaison agent, under a violent bombardment, he displayed coolness and courage. Was killed during the action." He is buried at Meuse-Argonne American Cemetery. 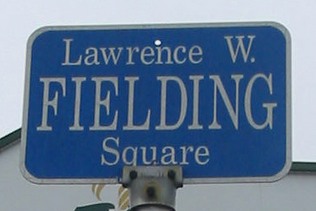 Marker for Fielding Square in Lawrence, MA, named after World War One casualty Lawrence Fielding.Lawrence, MA is known as the Immigrant City. What fascinated me was that these 32 boys were mostly first or second generation Americans who came from the following countries: France, Ireland, Great Britain, Lithuania, Germany, Poland, Italy and Russia. Connecting with these soldiers, learning their stories, and walking in the streets they lived on before heading to war provides great perspective on the sacrifice they made. Today, my city has changed considerably, but the immigrant story continues. I hope that our new immigrants can learn from these immigrants 100 years removed that their story is not new, but a constant in our country and city. the war is located and highlighted on our website and I would encourage anyone interested in our history to check it out.

How did the research process happen? Who helped with identifying these people, and what they did? Did you learn any surprises, or learn any memorable details?

The Great War buff who was originally from Lawrence, Michael Morris, got me interested in learning about the war and encouraged me to read "Smashing Though the World War with Fighting Company C" by Edward Sirois. Sufficiently interested in the war and its impact on my city, I then decided to visit France and the places where our boys fought and are buried.

The next step was to go to my city's archivist, Louise Sandberg, who then showed me the collection of materials held by our library, including a book written in the 1920s about Lawrence which listed our war dead.

Next, in coordination with the city's Veterans' office and Vietnam veteran Richard Russell, I learned of the various monuments located throughout the city. I was able to take this information and plug it into the ABMC database to learn where the soldiers were buried and what awards and distinctions were earned.

Then, the city clerk provided the city's street listings from 1916 and 1917 that documented the addresses of the targeted warriors' families. This information was important in allowing our current residents to visualize where the warriors lived and walked, making this history much more personal.

Finally, through a search online, I found a couple of 1929 reports authored by the Commonwealth of Massachusetts that listed all the warriors who were killed in combat with rich biographical information. The reports also describe the battles and fighting by the Massachusetts' units during the war.

This participation in the war had huge impact on the USCG afterward. Tell us about how things changed, and what was to come with their role in WWII and beyond.