World War I and the Marine Corps

Bravery at Belleau Wood set the tone for today's force

America’s initial entry into World War I, which came three years after the fighting began, was more promise than power. Military experts on both sides of the Atlantic knew the U.S. had very few experienced combat troops at its disposal. 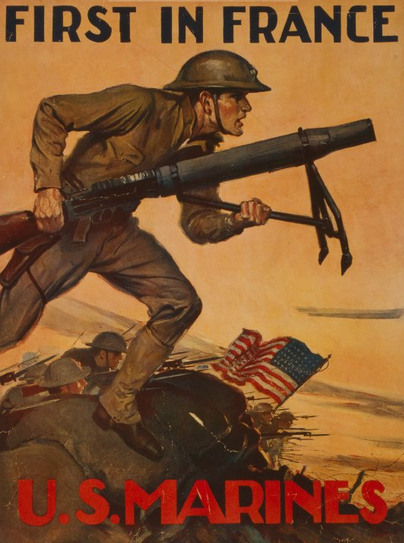 The Army had been deployed to the Philippines to fight insurgents, but that experience was very different from this battlefield, where machine guns, artillery and chemical warfare were capable of killing 10,000 men in a day. The Marines, totaling less than 15,000 men, had seen combat action in China and Nicaragua, but even that experience did not seem enough to help them prepare for their future charge in France.

America was now at war, and the Marines would be called upon. Congress approved 31,000 additional Marines, and to rapidly increase the Corps’ fighting strength, Gen. George Barnett, commandant of the Marine Corps, successfully orchestrated a nationwide recruiting campaign to enlist and commission the best of America’s volunteers.

It is then that the Marine Corps would undergo a radical transformation to do what was asked of them. Following boot camp and Officer Candidate School, Marines would take on more advanced garrison and field training both stateside and following their arrival in France.

Read the whole article on the Military Times web site: