In the fall of 2016, I found myself an exhibitor at a history conference in NJ, as many of my books and songs are about historic events and tell stories from the past. I had my CD Welcome to the Past playing on my table to increase traffic and interest when a woman named Nancy stopped by from a neighboring table to say she represented a genealogical society and was drawn to the historical stories she heard in my songs. This prompted a very nice conversation between us. Several weeks later, Nancy telephoned me to ask if I would be interested in writing a song about the men who died in service to our country during World War One. As fate would have it, she was working on an event to honor them in her town of Westfield, NJ. I immediately said, “Yes.”

After hanging up the phone, I realized I had some research to do. I had been a history teacher, and I knew the basic facts behind the war, but I wanted to make it personal. As a songwriter, I wanted to write a song that was about one soldier and every soldier at the same time. I needed to get into the heads of the men who served and died in The Great War. Consequently, I set out on a learning quest.

I’ve never fired a gun, except for a pellet gun that I used to shoot at cans on a fence post when I was eleven years old under my godfather’s watchful eyes and guidance. Having grown up in the 1960s, I know nothing of soldiering from experience, aside from the graphic photos and film clips I’ve seen on newscasts. As a result, I delved into reading personal accounts from WWI soldiers, reviewing pamphlets, and watching historic video footage. Eventually, I settled on a title, “The Boys of ’17,” and the flesh and bones of the song took shape and gelled in my mind, as the creative gears began to turn. 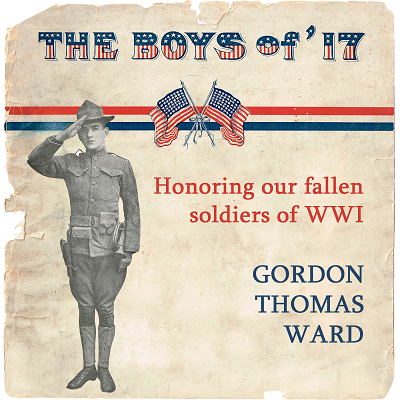 It became quite apparent to me that most of the men (‘boys”) that served in WWI had no experiential reference point from which to prepare themselves for the situations awaiting them. Oh, sure, they went through basic training and learned how to soldier, but nothing could ever prepare them for the absolute hell on earth that they were about to witness. Farmhands and professional men, urban and suburban gentlemen, and back-country boys, barely out of their teens, were massed together amidst the glorious posters, parades, send-offs, and patriotic music. Clearly, they were made aware of the dangers and perils, but it was impossible for them to prepare emotionally and wrap their heads around the experiences they were about to have.

Life in the trenches on the Western Front was a scene out of Dante’s hell. As the lyrics in “The Boys of ‘17” mention, there was mud, disease, and cold like few of us have experienced. Rats were a very common sight, and gas warfare was a constant threat. One needed to be on guard constantly during times of attack. The zigzag pattern of the trenches created a situation where enemy soldiers with bayonets and rifles might be just around the corner of one’s trench section. The stress was never-ending and highly intense.

However, the thing that stuck with me the most was the sheer horror of the bombardments. Going “over the top” meant that death certainly was very near for many, along with the common experience of watching friends die and be cut to pieces by enemy fire. One first-hand account I read detailed how parts of decaying corpses from shallow graves were “flung about,” unearthed by artillery fire. Death was everywhere, and a good deal of the killing taking place was often the result of hand-to hand combat. It was a situation for which the new soldiers were unfamiliar, yet it was one that became commonplace and numbed the psyches of others. Stateside, our country saw photos, heard reports, and buried many bodies of our fallen soldiers, but we couldn’t really comprehend what our soldiers went through “over there.” 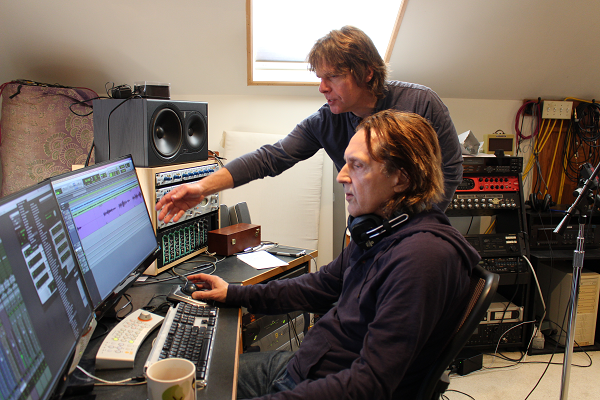 Eric Troyer (seated) and Gordon Thomas Ward engineering "The Boys of '17" in Troyer's New Jersey studio.Writing my song became, and was, an act of storytelling. “The Boys of ‘17” reveals the experiences of one soldier whose story speaks for many. I knew I wanted a somber yet patriotic feel to the music. The lyrics and music were written over the course of a day or two. It took about a week to polish, and the recording process took about three days. "The Boys of '17" features me on guitar and vocals, and I am very fortunate to have additional tracks from some of the best musicians I know. Eric Troyer (who has worked with John Lennon, James Taylor, Billy Joel, Aerosmith, and others) added bass and synthesizer, Keith Goellner played snare drum, and Peter "B" Burnejko added the flugelhorn. The song was engineered by Eric Troyer and co-produced by Eric Troyer and myself at Eric’s Charlestown Road Studio in Hampton, NJ.

So, why should anyone care about this song and a war that took place 100 years ago? The point that I’d like people to consider is these WWI soldiers had lives, friends, families, sisters, brothers, parents, lovers, wives, and/or children back home. They were called best buddy, husband, son, cousin, grandson, and/or daddy. They were simultaneously brave and terrified, strong yet driven to their knees with loss, trained yet unprepared emotionally for what they experienced. For them, life and death intermingled constantly and in an extremely grotesque fashion. Every one of our “boys” who paid/pays the ultimate sacrifice in war was and is a hero in the eyes of millions, but they were and are irreplaceable to a small group of grieving individuals, people just like you and me, back at home.

In the years since 1917, warfare tactics and technology have developed considerably, but the horror of war and sense of loss remain unchanged. Honoring and remembering our fallen heroes should not fade with time. While the recollection of historic events it fitting and right, our conscious sense of debt for those who put themselves in harm’s way to maintain freedom and liberty should remain more deep-rooted than centennial observances and other anniversaries because, for our soldiers, war was and is a personal reality, and their sacrifices remain timeless.

Gordon Thomas Ward is an author, singer-songwriter, and presenter. He currently divides his professional time between writing, lecturing, songwriting, and performing.