What do Homer Saint-Gaudens, women’s suffragettes, Theodore Roosevelt, the Gettysburg Battlefield, a copper mine in Michigan, and Irving Berlin have in common? They all have a connection to World War I through the national parks. 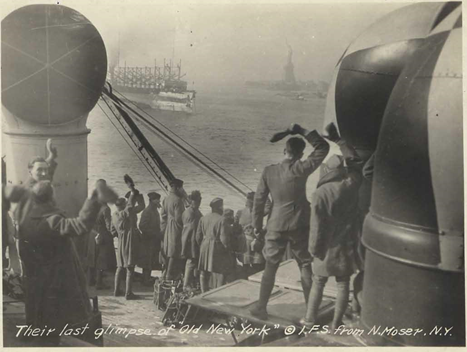 Departing soldiers wave to the Statue of Liberty, ca. 1917 (NPS).To tell these stories in honor of the WWI centennial, the National Park Service (NPS) launched an all-new NPS WWI website.

Park rangers, historians, and other subject matter experts contributed all new material, sharing untold stories from the parks. As the project developed, and more and more stories came to light, it was as though we had discovered an exciting new dimension to the parks, and we were eager to share it.

For example, many Civil War battlefields are now national parks. The Civil War was just fifty years before World War I, and many of the battlefields were still reserves that would not be transferred to the NPS until the New Deal era (the NPS was created in 1916). Many of these Civil War battlefields were used as training grounds for WWI. On the fields of Gettysburg, Maj. Dwight D. Eisenhower was training Americans to maneuver tanks in 1917. On the site of the Petersburg Battlefield, where Civil War entrenchment tactics reached their zenith, 20th-century Americans were digging trenches on the same ground to apply the knowledge of the nation’s bloody past to a new war. You can still walk these hallowed grounds.

An FT-17 tank and infantry maneuver at Gettysburg during a WWI training exercise ca.1918. (NPS)Future presidents Hoover, Truman, and Roosevelt all played a role in the war and its aftermath. Hoover, who was raised in a Quaker family’s tiny home in Iowa, became “The Great Humanitarian,” offering food aid to war-ravaged Europe. Truman saw front-line experience as an artillerist. Roosevelt, who would lead the nation through the Great Depression and the Second World War, charted a course for the U.S. Navy and saw the destruction on the front lines first hand. Their homes and other monuments honor these presidents as national parks today. You can visit these places, and walk the same halls they did.

Departing troops waved to the Statue of Liberty while immigrants faced backlash in her shadow. You can still visit Liberty Island and imagine yourself in their shoes.

National parks can make you feel transported in time, whether it is to your childhood when your parents brought you to a special place, or whether you empathize with people and stories from the distant past. However, there are rare instances where a national park has an overt WWI connection, and one must look below the surface to find these connections to the past. The WWI centennial is an opportunity to see the national parks in a new light, with added value and importance, as part of a broader American experience.

Learn more about the NPS’s WWI connections and visit nps.gov to start planning your visit to a national park today!

Nathan King is the coordinator for the NPS WWI website, and is the Digital Communications Specialist for the NPS National Capital Region.