By Stephany B. Neal
via the 369th Experience 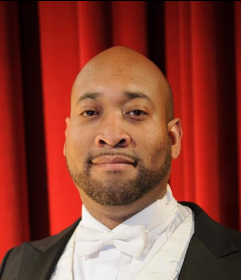 The 369th Experience is part of a series of events endorsed by the World War I Centennial Commission and sponsored in part by The Coca Cola Foundation to commemorate the 100th anniversary of World War I. A key component of this celebration is the re-creation of the 369th Regimental Band, which in its original form consisted of 65 African American and Puerto Rican gentlemen who charmed the hearts and minds of Americans and Europeans.

Dr. Butler will lead the band as they retrace the steps of the original band with performances at centennial celebrations in New York City; Brest and Paris, France; and a host of other historic locales. Dr. Butler brings a wealth of experience to the programs. He is currently the Director of Bands and music program coordinator at The University of Maryland Eastern Shore, a position he has held since 2014. He is also a member of the 287th National Guard Band.

Dr. Butler has a stellar repertoire of experience that includes performances in eight Broadway productions, touring and recording with many of the country’s leading jazz orchestras, and playing all four chairs in the world-famous Count Basie Orchestra. While living in New York, Dr. Butler played in the 319th Army Band from 2008 to 2012.

As a conductor, Dr. Butler is the conductor for the UMES Wind Ensemble, the HBCU NBDC Trombone Choir, and he has been the Associate Conductor of the Brighton Symphony and Eastman Trombone Choir and Brass Guild. He has studied conducting with Brad Lubman, William Weinert and Kynan Johns. While in NYC he was a frequent performer on numerous Broadway shows such as Lion King, Wicked, Color Purple, Newsies, Promises Promises, and most recently Shuffle Along.

Dr. Butler is a Conn-Selmer Artist and Clinician and remains both an active clinician and performer.