"To unveil the Great War through the eyes of the men, women and children who lived though it"

Many World War I commemoration events took place last month across the country, marking the April 6th centennial of the U.S. entry into the war. One that stood apart, as a very special and unique tribute, was a concert tour provided by the Prima Vista Quartet. The Prima Vista Quartet is a group of world-class musicians from France. To honor the Americans who served during the war, they employed their incredible musical talent to create a live score for the World War I-themed film WINGS. WINGS was the first film ever to win an Academy Award for Best Picture, and it was directed by William Wellman, a combat veteran pilot for the American Expeditionary Forces in France during the war. During April, Prima Vista performed their live-accompaniment for audiences in five locations in the United States.Baudime Jam is the founder, composer, artistic director and violist of Prima Vista. We talked to him about World War I, about the tour of the United States, and about Prima Vista's future efforts.

The Prima Vista Quartet performed a special series of World War I-themed shows in the United States. Tell us about them -- the film, the live accompaniment, the tour.

The silent film « Wings », produced in the USA in 1927, commemorates the Saint Mihiel battle which was the first fight on the French battleground of the US Army, placed under the command of General John J. Pershing. The film director, William Wellman, was a veteran himself, member of the famous Lafayette Escadrille, which adds to the historical signification of this film. 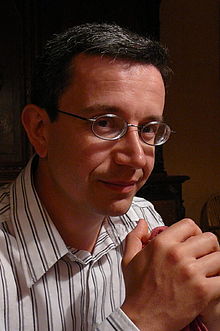 Baudime JamThe purpose of this project has been to allow a wide contemporary audience to discover a film which was shot ten years after the end of WWI and that evokes eloquently and dramatically the first US involvement in this war.

We saw a film concert “Wings”, therefore, as a unique occasion to illustrate and evoke a major historical event of WWI, while at the same time offering a rare artistic experience which blends film on screen and live music on stage.

Prima Vista Quartet toured the United States in April, starting in New York at the Florence Gould Hall at the French Institute Alliance Française (FIAF) on April 6. This date marked a historic occasion as on April 6, 1917, the United States officially entered into World War I.

The other cities where Prima Vista performed were: Chicago at the Music Box Theatre, Washington D.C. at the Maison Française at the Embassy of France, Saint Louis at the Winifred Moore Auditorium - Webster University, and Minneapolis at the Landmark's UptownTheatre.

Who is the Prima Vista Quartet? How did the group come together? What was your mission & vision as performing artists?

The Prima Vista Quartet is a French string quartet which was founded in 1997 and therefore celebrates their 20th anniversary this very year. During those two decades, we have had the opportunity to appear in many festivals and prestigious venues in France, Italy, Spain, Germany, England, Russia, Poland, Africa, China, and the USA. 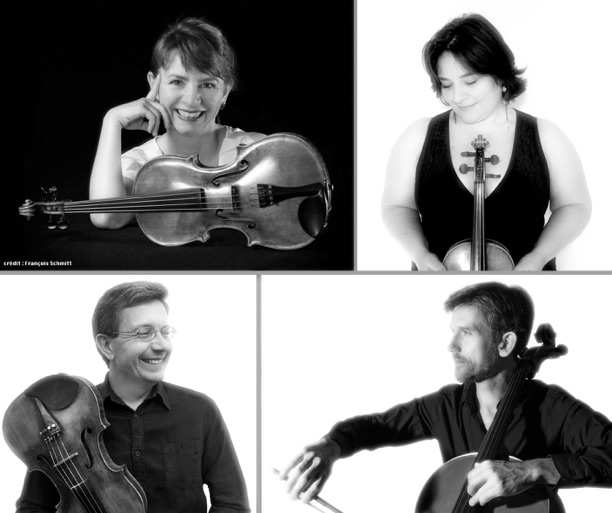 The Prima Vista QuartetPrima Vista has forged a unique artistic identity : without forgetting the great repertoire of the string quartet, from Mozart and Haydn to Bartók and Shostakovich, with frequent detours through the rediscovery of little-known authors, as well as the creation of modern and contemporary works (sometimes composed for them), the Prima Vista Quartet has consistently explored new aesthetic horizons such as tango, jazz, klezmer, musical tales for children, transcriptions of symphonic and lyric repertoire, or the accompaniment of silent films.

Respectful of the aesthetic of each film, the Prima Vista Quartet performs their silent film accompaniment, all of which I have composed the original scores. Contrary to common misconception, we do accompany silent films with arrangements of classical, baroque, contemporary, jazz, rock or ethnic music, but with ... film music. We believe that cinema has its own musical idiom and their film concerts performances offer a unique opportunity to experience an enhancement of its repertoire. 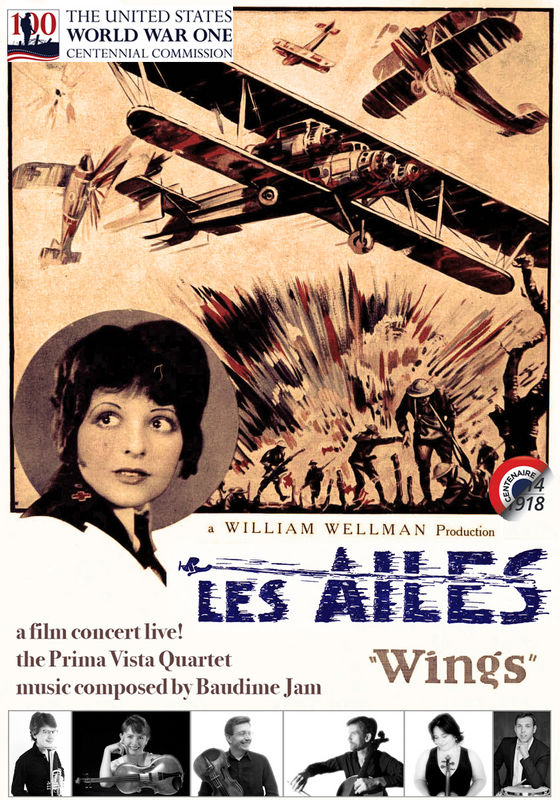 NGS was awarded the first Oscar for Best Picture. Tell us what makes the film score for "WINGS" special and unique for PRIMA VISTA to perform? How does the film match the film onscreen?

I have composed the score for « Wings » in 2014 and right at the beginning, I knew I would have to add another dimension to the quartet. To render the heroic and Hollywoodian flavor of these aerial adventures, we are therefore hosting trumpeter Matthias Champon and percussionist Cédric Barbier to add symphonic colors to the strings.

This, and also the fact that the film lasts 2h20 which represents a physical and artistic challenge, make this film concert a special and unique project for us.

Because music in film is the result of a meticulous and magical alliance with image, Prima Vista invites the audiences to discover the full range of emotions of a string quartet at the service of the masterpieces of silent cinema.

Each score is an invitation to indulge in a different and unique musical and cinematic world, in keeping with the diversity and uniqueness of each cinematographic work, in order to ensure consistency and compliance with the artistic intentions of the filmmakers.

We eschew modern technology (click tracks over earphones or monitors on stage with timings and cues) in favor of the live experience of pure hand-eye co-ordination and acoustic musicianship. The musicians sit to the side of the stage and I keep cinematic images and the quartet’s music in expressive synchronization.

I have composed those silent film scores in the spirit of the era of the movie, to the point that audiences experience movie and music as one.

What other historical projects have your people been working on? Do you have other World War I-themed projects in the pipeline, after this tour?

We have accompanied two other silent films which are based on historical events : Griffith’s « Orphans of the Storm », which takes place in Paris, shortly before the French Revolution, and which involves figures such as Danton, Robespierre, Lafayette or Thomas Jefferson, and « The New Babylon » which deals with the Paris Commune in 1871. We also have in our film concert repertoire the famous masterwork of Buster Keaton, « The General », whose backdrop is the American Civil War.

Before completing the score for « Wings », I worked on another World War I-themed project : I made extensive researches at the Communication and Audiovisual Production Company for the Department of Defence (ECPAD) in order to put together a 1h30 program made of footages produced in France between 1915 and 1918.

The purpose of this project was the following : from August 1914 to November 1918, France mobilized 8,700,000 soldiers and sailors. This bleeding resulted in brutally parting men from women and children. Each one had to reconsider one’s destiny and reinvent one’s daily life in order to survive, certainly, but also to live, despite the horror. 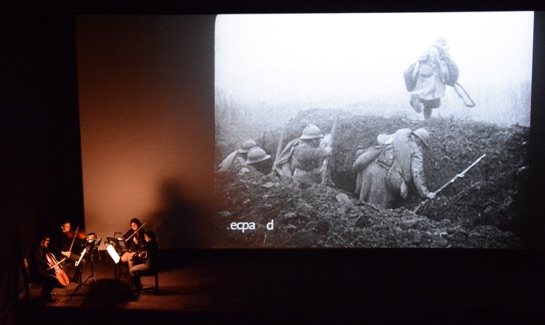 The Prima Vista Quartet playing live accompaniment for historic silent films.In the cities, the factories, and the fields, women reinvest territories left fallow : their mobilization is exemplary. But their contribution is not limited to the war effort: they bring comfort, joy and hope, while preparing the future. At the rear of the front, between two assaults, the « poilus » rebuild any semblance of "normal" life in the ruins which have become their home. Improvised concerts, puppet shows, theatrical performances: with a bombing background, the Broken faces organize the great escape of the soul, knowing instinctively that they need to forget in order to survive. And children? More often left to themselves than usual, they mimic this war whose echoes reach them with little distortion. Through the animated book that her dad on leave gave to her, little Micheline discovers the daily life of her fellow children in the time of general mobilization. But over there, in the east, there is another reality : the front. Men. Barely men. Shadows that creep into a mud of steel, bones and blood under an invisible sky torn with deafening lightning. Clenched hands, silent screams, gutted heads, feet rooted in the nourishing earth. Dazzling visions. Strangely beautiful.

This film concert tour allowed us to unveil the Great War through the eyes of the men, women and children who lived though it : a portrait of a disjointed Humanity seeking a meaning to resist the unspeakable.

I hope we will have the opportunity in the future to introduce the American audience to these historical archives which are at the same time shocking and instructive.

Both these projects have been created to be presented during the WWI Centennial Commemoration : they were first performed in 2014, in many cities and festivals in France. Further performances will follow in 2017, notably in Saint-Mihiel for a special commemorative event, in the very spot where the « Wings » events occured in September 1918.