"What the memorial needs to do is appeal to the general public."

Last week, the U.S. Commission of Fine Arts gave approval for the design-concept for the new National World War I Memorial in Washington DC. This vote of support was a huge milestone in the creation of the memorial, and came as great news to the World War I Centennial Commission, and to the Memorial Design Team. We spoke to the memorial's sculptor, Sabin Howard, about the approval, and what it means for the project.

Congratulations on the successful presentation to the US Commission of Fine Arts! Tell us about how you approached your pitch to them, and what you told them. 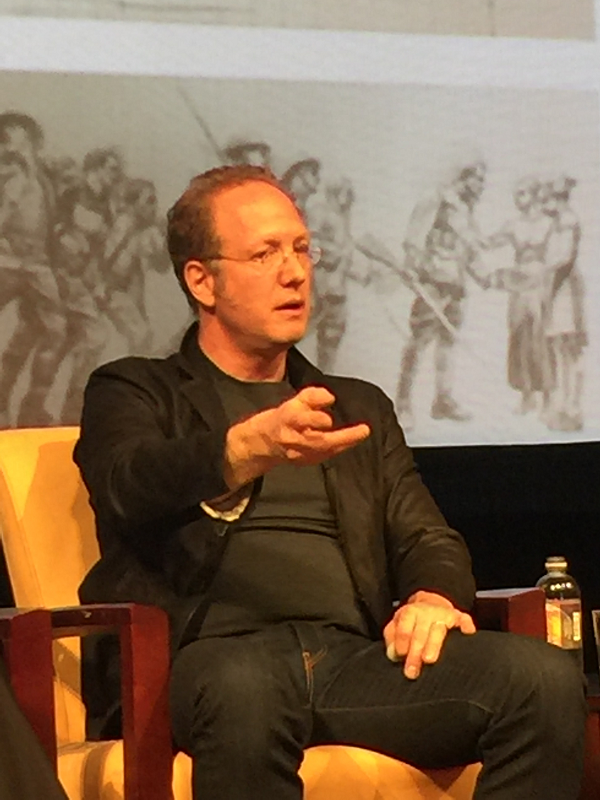 Sabin Howard, shown speaking in April 2017 at the U.S. National Archives in Washington, DC.It is our job to create a memorial that will bring visitors to the site and with the purpose of creating something that will spark interest in a war fought 100 years ago. It is my job as an artist to bring the memorial to life; and there are two main components of creating this commemorative art.

First, I need to teach and excite interest in a way that can be understood by all sectors of society. The story is not only understood by your average visitor but has many layers of allegory and symbolism as well that a PhD in art history would appreciate.

The relief that I have designed would answer the question - What did World War I look and feel like?-So in the studio we assembled real people in uniforms from World War I and staged scenes based on photographs that we found as reference of what happened in this tragic and epic moment in history.. When we dressed up these young men and women and placed them underneath lights, certain feelings and emotions entered into the room. A relational energy was created as the actors fed off each other emotionally. It was powerful.

Through this process, my artistic approach changed from a more static classical format to one that was filled with drama and movement as I captured a single image (with multiple scenes) that would explain a complete movement and story.

I like to think of it as a spark that time traveled to my studio in the Bronx allowing us to feel what it must've been like for those young men and women fighting overseas.

The second component of creating this commemorative art was to establish a narrative of a war fought 100 years ago. Here, America is represented by this soldier that tells the story of World War I through an emotional truth. We have created a story that is inclusive of all sectors of society. And the characters depicted in the sculpture present all of the emotions that humans have; mad, glad, sad, and anger.

We very specifically picked a relief to tell the story rather than sculpture in the round. A relief is both pictorial and sculptural, giving tremendous range to tell a story in a space. I call this "spatial narrative." The relief is also very cinematographic which is something that our society understands well. Visual narrative through film is very similar to visual narrative in a sculpture, except in a sculpture the viewer is the active observer rather than a static observer. 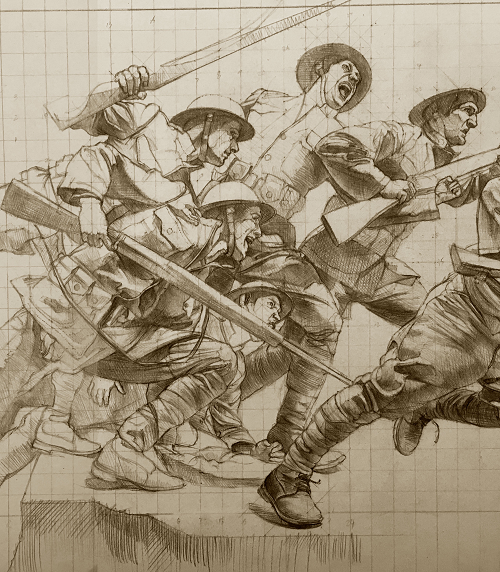 Detail drawing from the Sabin Howard sculptural element for the new National World War I Memorial in Washington, DC.The other reason we picked a relief is because it is less intrusive than sculpture in the round. It is very important that there is a sense of intimacy with the viewer, and we have specifically picked a scale for the figures that are relational with the visitors that come to the park. If I had designed the sculptural element with figures that were way over life-size we would move more into the realm of classical and unattainable. By working with perspective I am able to create a sense of the sacred and monumental yet at the same time make the figures accessible.

They have voted to support the design concept. What does that mean for you now? What are your next steps?

The next steps necessary to bring this memorial to life is to transfer the initial drawing concept into a three dimensional sculptural concept. The drawing is beautiful in its own right, however it does not carry as much information as a sculptural design can show.

There are certain things that will translate well and then there will also be elements that need to be adjusted and modified. The energy increases in a three-dimensional sculpture, there is greater contrast with lights and darks and the design elements are tweaked. This is all done to create more expression in the story telling. The sculpture will begin to deal with the environment of the ground and how the edges frame the composition. I will also begin to push and pull the space. By this I mean characters will begin to advance into the foreground, and figures will diminish in scale as they recede into the background.

I like to think of sculpture is drawing on steroids. When it's done well it is extremely powerful and this is what is necessary to get the audience to be pulled in to the composition. Our mission is to get people to walk away from this memorial with the response of "oh my god that was amazing I need to know more."

Your envisioned bas-relief wall sculpture for the memorial continues to develop. Tell us about what it currently looks like. What details are resonant for you?

Detail drawing from the Sabin Howard sculptural element for the new National World War I Memorial in Washington, DC.One of the things that has begun to develop in my mind and now will be brought out once I start sculpting, is this sense of how do I could create something that has so much drama and movement that the visitor to the site has this transfer of feeling from his experience of looking.

The sense of movement is critical. Every single figure is moving towards the future which is on the right side of the panel. Each figure moves at a different rate of speed depending on what the storyline is. Every single pose has been dissected and selected based on its ability to tell the story of that individual character and then also how that individual character will fit within the whole.

Over 12,000 pictures were taken and then after nine months and 12 iterations later here we are at the starting blocks poised and ready to start moving the Clay and creating a sculpture.

You have also had a breakthrough concept for the actual production of the sculpture, after conferring with a notable sculptor in New Zealand. Tell us about what you took from that engagement, and how it will impact your effort.

Richard Taylor who runs Weta Workshops in Wellington New Zealand, came to my studio in the South Bronx this spring. Richard has a true passion for classical sculpture and has been in the film industry for the last 30 years. He is responsible for much of the work done in Lord Of The Rings, Avatar, King Kong, and his latest work Ghost In The Shell. In the film industry deadlines are extremely tight and no job is too big. Richard and I have talked extensively about how do we create something that maintains the integrity, elegance and grace of fine art yet at the same time is done in a timely fashion.

I will continue to be the designer and sculptor in this process but at the same time because we wish to have something to show the fine arts committee by fall I will need to have a bunch of assistance that can work side-by-side to bring this to completion by latest November.

What we are doing is truly groundbreaking and historical. A relief that is 65 feet long in length with museum quality design and form of the human body done today challenges the notion in the modern art world that this type of art cannot be done.

What we are doing is a paradigm shifter!

We are not following the status quo but we are breaking down barriers and offering something to the public that will go along way in creating and bringing back an interest in art. This is extremely important because what the memorial needs to do is appeal to the general public. It reconfigures the balance between visual art and conceptual art. This memorial is first and foremost visual, the message that it carries must be understood. I am not saying that that message will be simplistic. What I am saying is that there will be many layers to what story is told. Specifically it will appeal to all levels of society excluding no one.

Richard who has worked in the film industry is in the business of telling stories. Those stories also have appealed to the general public. What we are doing is using those work processes to ultimately deliver the same excitement but in a different form. That form is one of high art that delivers a message of transformation befitting of a national memorial.

Visit the National World War One Memorial at Pershing Park page more information on the Memorial and how you can help build it.