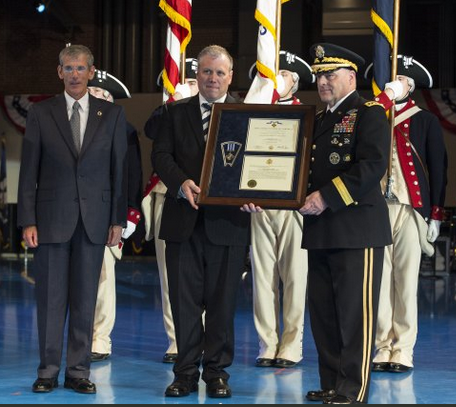 As part of a June 14, 2017 twilight tattoo event at Joint Base Myer-Henderson Hall, Va., held on honor of the Army's 242nd birthday, Acting Secretary of the Army Robert Speer, left, and Chief of Staff of the Army Gen. Mark A. Milley, right, present a posthumous Distinguished Flying Cross for Army Capt. James E. Miller to Miller's great grandson, Byron Derringer, center. Miller served as a pilot during World War I, and was the first combat aviation casualty of the war. (Photo Credit: U.S. Army photo by Spc. Trevor Wiegel)

By C. Todd Lopez
via the army.mil web site

Capt. James E. Miller, one of the first aviators in the U.S. military and the first U.S. aviation casualty in World War I, has been named recipient of the Distinguished Flying Cross more than 99 years after his heroic actions over France in 1918.

On the 242nd birthday of the U.S. Army, during a twilight tattoo ceremony at Joint Base Myer-Henderson Hall, Va., Acting Secretary of the Army Robert M. Speer presented the Distinguished Flying Cross to Miller's great-grandson, Byron Derringer. 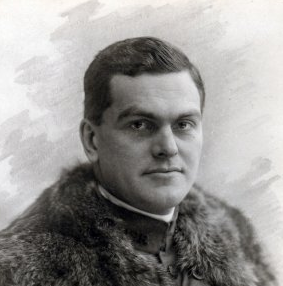 Capt. James MillerWe're very proud today to have some of the descendants from James Miller's family here and able to represent him and a lineage of what he achieved on those battlefields as the first individual who gave his life in that war in aviation," Speer said.

The presentation of the Cross to a WWI Soldier is significant, given that the theme for this year's Army birthday is "Over There! A celebration of the WWI Soldier."

"This is the 100th anniversary of World War I," Speer said. "And it's the 242nd birthday of our Army. But 100 years ago, there were significant changes in terms of the character of war. You had at that time, for the first time, the Army going off to war in foreign lands with our allies, fighting side-by-side with our allies, and representing the United States -- which placed the United States into a significant leadership role in the world."

Speer said several aspects of warfare changed during WWI, including the development of armor units and precision artillery. One of the most significant developments, however, was that the U.S. military had "aviation for the first time as part of the U.S. Army Air Corps," he said.

"We have a privilege today to be able to recognize not only the heraldry of our total 242 years but also that point and time, where we recognize, late, a Distinguished Flying Cross for an American hero," said Speer.

As a Soldier in World War I, Miller was one of the first to make use of new aviation technology. The captain took command of the 95th Pursuit Squadron on Feb. 10, 1918 -- just 10 months after the United States declared war on Germany. The men in the squadron were the first American-trained pilots to fight in the war.

Read the whole article on the army.mil web site.