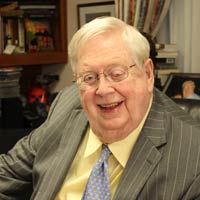 "It is with great sadness that I report the death of Jim Nutter," said Commission Chair Robert J. Dalessandro. "Jim was an original member of our commission, and our first donor, graciously hosting us in KC after our first meeting, and providing the seed money to hire our first staff members. Jim was always there for the WWICC."

James B. Nutter, Sr. of Kansas City, Missouri was a pioneer in mortgage lending, founding his mortgage lending company in 1951. The Army veteran and Midwest native wanted to help his friends purchase their own homes with the comfort of personal touch customer service. Today, the company is one of the largest privately-owned mortgage banking firms in the nation.

The success of his company enabled Nutter to personally donate millions of dollars to a host of non-profits, including Habitat for Humanity, Mayo Clinic, Kansas City's Children's Mercy Hospital, the Harry S. Truman Library Institute, Kansas City Central Library, Boy Scouts of America (as a boy he made the rank of Eagle Scout), Saint Luke's Hospital, Little Sisters of the Poor, and Wayside Waifs animal rescue. Named for him are the James B. Nutter Sr. Family Information Commons at Ellis Library on the campus of his alma mater, the University of Missouri, and the Nutter Ivanhoe Neighborhood Center and Park in the urban core of Kansas City.

He was appointed to the Commission by the then-Majority Leader of the United States Senate, Senator Harry Reid of Nevada.