By Rebecca Burylo
via The Montgomery Advertiser 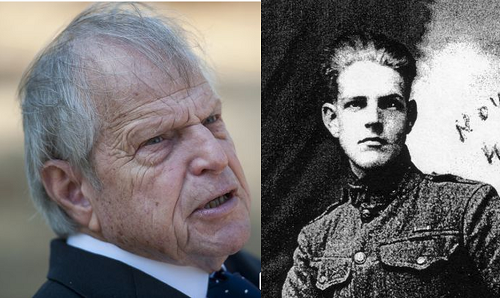 Korean War veteran and Silver Star recipient Rod Frazer (left) will officially unveil and dedicate a bronze memorial in Montgomery, AL on August 28, honoring the story of the Rainbow Division and his father, William Frazer (right).Rod Frazer vividly remembers watching soldiers he knew fall lifeless into the mud beside him during the Korean War, much like what he imagines his father experienced during World War I in France.

Their soldiers fell in twisted heaps on a foreign battlefield. It seemed, he said, as if war and death had siphoned what was left of those once strong, robust men.

A Korean War veteran and Silver Star recipient, Frazer can't seem to shake the images of that battlefield, similar to what must have haunted his father, William Johnson Frazer, who fought in the 4th Alabama National Guard. It later became the famous 167th Infantry Regiment after they were federalized, said Graham Neeley, a collections curator at the Alabama Department of Archives and History.

Known for its rainbow-colored patch during World War I, the 167th or the 42nd Rainbow Division, is a story of death, sacrifice and victory that few still recall.

Frazer, who is also an author and historian, will officially unveil and dedicate a bronze to the city honoring the story of the Rainbow Soldier and his father on August 28. It will mark exactly 100 years since 3,677 guardsmen, including his father, William Frazer, hopped onto one of eight trains from Union Station to fight after the United States entered WWI in April.