The Wool Brigades of World War I, when knitting was a patriotic duty

By Anika Burgess
via the Atlas Obscura web site 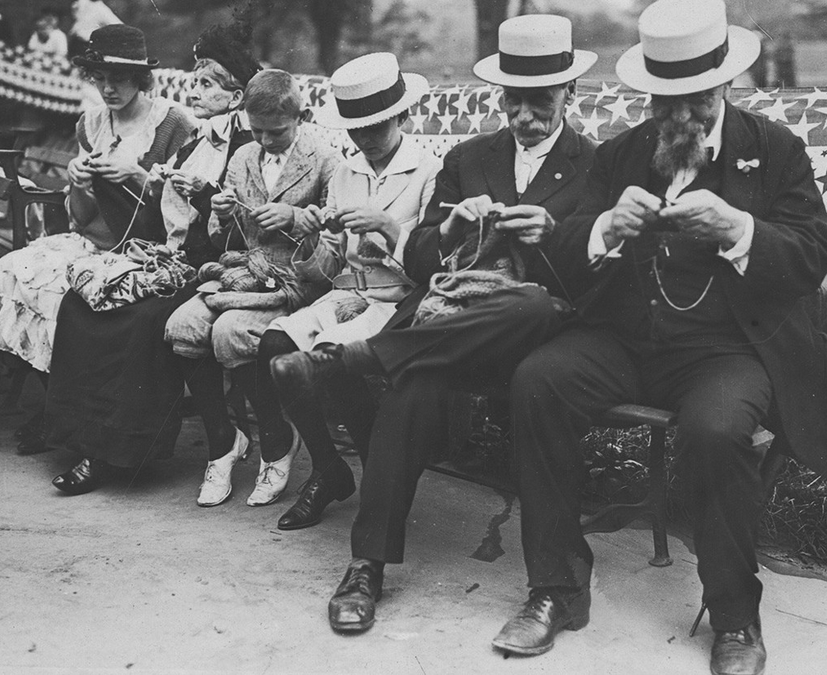 Knitters at the Navy League Central Park knitting bee, 1918.In August 1918, the Comforts Committee of the Navy League of the United States opened a three-day knitting bee in Central Park. It was a massive event, with a sole purpose: to produce warm garments for those fighting in World War I. At the event, there were knitting competitions for speed and agility, and attendees ranged from children to octogenarians. The numbers were so great that one of the chairwomen said, “the click of the needles could be heard all the way to Berlin.” By the end of the “knit-in,” the Comforts Committee had raised $4,000 (roughly $70,000 today) and created 50 sweaters, nearly as many mufflers, 224 pairs of socks, and 40 head-and-neck coverings called “wool helmets.”

During the war, there was an overwhelming effort to assist those fighting abroad. Before America even joined the war, organizations such as the American Red Cross and the American Fund for the French Wounded had issued pleas for warm clothing for soldiers—or, as a Navy League poster put it, to “Knit a Bit.” After April 1917, the Red Cross and the Comforts Committee worked together to mobilize ever larger numbers of knitters, with a request for 1.5 million knitted garments. (There was also another way to use knitting against the enemy—spycraft.)

The need for warm clothes, particularly socks, was desperate. Men at the front were fighting in the atrocious conditions—muddy trenches and frigid winters—with inadequate footwear. “The difficulty is to keep one’s feet warm,” wrote one officer in 1917. “One walks and they get warm, stand for one minute and they are icicles again.” Soldiers also needed to keep their feet warm and dry to avoid frostbite and trench foot, and the best way to do this was to don clean socks regularly.

Knitting was promoted as a patriotic duty. A Red Cross poster showed a woman knitting diligently, with the words, “You Can Help.” Tape measures were sold in red, white, and blue, and the Betsy Ross Yarn Mills advertised their water-repellent, khaki and grey wool with “Uncle Sam Wants You To Knit To Protect His Boys—‘Over There.’”