The defining role of the National Guard in WWI

ARLINGTON, Va. -- Over 100 years ago, on August 5, 1917, the entire National Guard was drafted into U.S. Army service for World War I. This represented the culmination of several steps declared by President Woodrow Wilson that would mobilize the National Guard into the "Great War" and which sent troops into Europe for the first time. 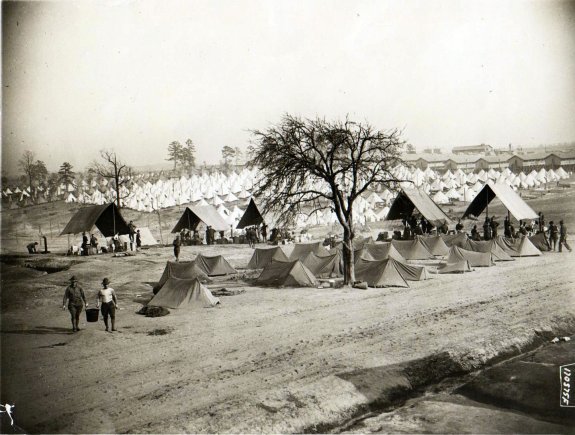 After the National Guard was drafted into the U.S. Army on August 5, 1917, Soldiers mustered at their home stations and mobilized into several training camps across the United States prior to their deployment to Europe. Here, Camp Wadsworth, in Spartanburg, S.C., is packed with tents. (Photo Credit: National Archives)This act stands among a series of laws and military decisions in the early 20th century that resulted in the transformation of the National Guard from a traditionally local military organization into professional military force. A little over a year earlier, the National Defense Act of 1916 introduced the modern integration of National Guard Soldiers as an element of the United States Army. It required that Guard members in federal service would serve in the U.S. Army uniform and train to federal standards, in addition to other measures designed to improve readiness and efficiency.

However, the 1916 Act did not authorize the transportation of federalized National Guard troops to a foreign country. The Judge Advocate General of the U.S. Army ruled that the Guard could only be used domestically, owing to the Militia Clause of the U.S. Constitution that only allowed the National Guard in federal status to "execute the laws of the union, suppress insurrection and repel invasions." This phrase alone deemed necessary the draft action.

The mobilization order of June 18, 1916, that ordered the Guard to the Mexican border represented the second milestone among the changes in national defense strategy. It demonstrated the power of the National Guard as the country's principal reserve force for the U.S. Army to be mobilized in a declared national emergency. This gradual evolution of legal precedents allowed the Army ample opportunity to make corrective action and improve the deployment process.

Heightened national security concerns earlier in 1917 allowed the National Guard's mobilization to move forward after the draft order of August 5. 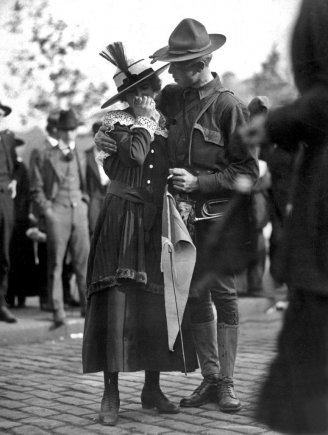 A Soldier boy of the 71st Infantry Regiment, which would be reorganized as part of the 27th Division, New York National Guard, saying goodbye to his sweetheart as his unit leaves for training at Camp Wadsworth, Spartanburg, S.C., where the New York Division trained for service, 1917. (Photo Credit: War Department)The draft's impact was immediate. On June 30, 1917, the Regular Army consisted of 250,357 officers and enlisted men. By August 5, 1917, through means of incremental federalization of state National Guards and the draft order, 379,323 officers and enlisted men of the National Guard were drafted into the federal service.

With one pen's stroke, the Operations Department within the Office of the Chief of Staff of the U.S. Army more than doubled the size of the Army. The National Guard's presence proved essential to raise the significantly larger fighting force, and it added the element of experience through its training completed in the four southwest border states during 1916 - 1917.

Legal considerations remained paramount in this time of war. Statutes and laws regulated the operations of the militia from its very beginning in colonial New England. Thus, the draft order only continued the tradition of commitment to rightful principles administered under these conditions.

On July 18, 1917, War Department General Order 95 established the first 16 National Guard divisions. A few weeks later after the draft order, the 42nd "Rainbow" Division mustered. From August 5th throughout the remainder of 1917, these units traveled to their respective training across the country to prepare for the voyage to Europe and the fight against the Central Powers.

The settlement of legal and administrative matters allowed the federal government to assemble and accelerate the development of a National Army, and federal priorities turned to the training and the assembly of a highly effective fighting force. The German Empire proved every bit a formidable opponent, but the presence of the National Guard and the cumulative services proved decisive for the Allies.

After the war's combat phase ended on Nov. 11, 1918, the German High Command's appraisal of American combat divisions assessed that eight divisions' effectiveness earned ratings of "superior to excellent." Among those eight, six were National Guard divisions.

The Guard's highly effective success proved critical in the victory of Allied forces in their grueling months in the "War to End All Wars."

First Lieutenant Harry Truman (14th from left) enjoying a soft drink with fellow officers, "A jolly bunch at the 129 Field Artillery Canteen, Camp Doniphan, Oklahoma." After the National Guard was drafted into the U.S. Army on August 5, 1917, Soldiers mustered at their home stations and mobilized into several training camps across the United States prior to their deployment to Europe. (Courtesy of Harry S. Truman Library & Museum) (Photo Credit: F.G. Willard)