Lt. Col. Thomas W. Miller did not have a gavel when he assumed chairmanship of the Paris Caucus on March 17, 1919. So the former congressman from Delaware pulled from his pocket an 1873 silver dollar that he always carried and rapped it on the table. The final day of the first gathering of what would become The American Legion was under his command. 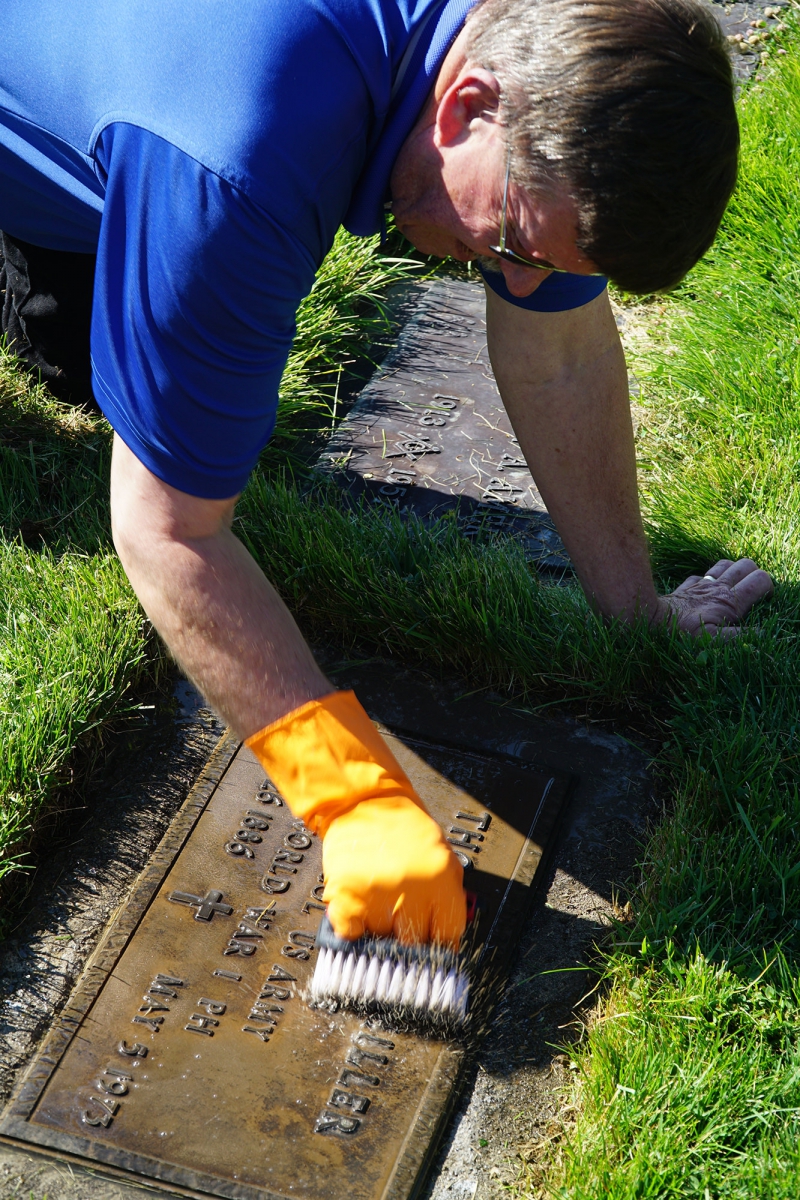 “I think this is something that needs to be a regular tradition,” American Legion Department of Nevada Commander Yvette Weigold said at a Saturday graveside ceremony to remember Miller. “We need to pay him that honor.”

“This should be a place of pilgrimage for The American Legion and the Department of Nevada,” agreed Jack Monahan of Connecticut, a member of the United States World War I Centennial Commission. “This is one of the most historically significant American Legion sites in the state.”

Monahan, American Legion 100th Anniversary Observance Committee Chairman and Past National Commander David K. Rehbein of Iowa and Denise Rohan of Wisconsin, leading candidate to serve as the next national commander of The American Legion, were among many dignitaries of the organization who participated in the commemoration.

“I met Thomas Miller and knew who he was,” said G. Michael Schlee, chairman of The American Legion’s National Security Commission. “I remember that he was a presence, every time he entered a room.”

A Yale graduate who took his military training at the Plattsburgh, N.Y., camp for college-educated men during the Preparedness Movement at the same time he was serving in the U.S. House of Representatives in 1915, Miller was the son of a Delaware governor and had served as secretary of state there. Defeated in 1916 by 153 votes in his bid for a second term in Congress, Miller enlisted in the Army after the United States declared war in April 1917. Miller started out as a private in an infantry company but was swiftly made a corporal thanks to his earlier training. Initially passed up for combat service due to his eyesight, Miller persisted and was later commissioned as a signal corps captain. He made his way to France with the 79th Division in 1918 and fought in the Meuse-Argonne battle where he a received a Purple Heart and was promoted to lieutenant colonel.

In March 1919, Miller was among the American Expeditionary Forces personnel still occupying Europe after the armistice that ended the Great War four months earlier. He heard about a gathering of troops in Paris who were talking about a new veterans organization and decided to check it out.

There, he met up with others who had trained in the Readiness Movement camp at Plattsburgh and with another World War I officer he knew through Washington politics: future U.S. Sen. Bennett Champ Clark, son of the former Speaker of the House. Clark, a Democrat, had selected Miller, a Republican, as chairman pro-tempore of the Paris Caucus. On the final day of the gathering, when such matters as the name of the organization and its constitution were discussed, Miller presided after Clark was called away for a meeting. 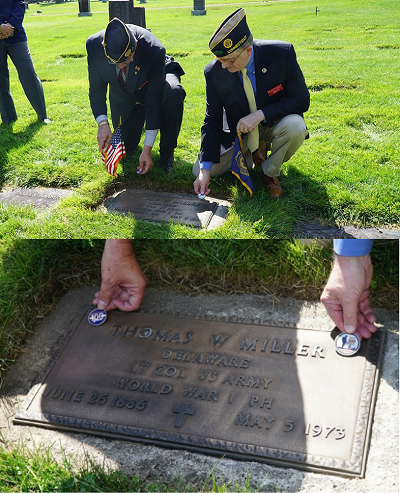 Miller had many roles in the beleaguered Warren Harding administration, including service on a committee to form the Veterans Administration, a seat on the American Battle Monuments Commission and as Alien Property Custodian. In that capacity, Miller was convicted and served 18 months in prison over the sale of German enemy property but was later pardoned by President Herbert Hoover and paid restitution.

Shortly afterward, he moved to Reno, Nev., where he oversaw Civilian Conservation Corps work camps and started the Nevada State Parks system and was a staff field representative of the U.S. Veterans Employment Service.

He served as commander of The American Legion’s Department of Nevada and was the department’s NEC representative for decades. At the 1968 American Legion National Convention in New Orleans, Miller was elected to the position of past national commander. He died in 1973.

“I learned a lot about him from the old timers who knew him,” said Bob Terhune, immediate past department commander for Nevada, who attended Saturday’s ceremony. “He was a character. He liked to have fun, but he became very serious when it came to veterans issues.”

“I will definitely keep him in prayer this Sunday,” said Department of Nevada Chaplain Dan DePozo, who spoke at Miller’s grave during the visit. “In reverse, I will ask for him to pray for us.” 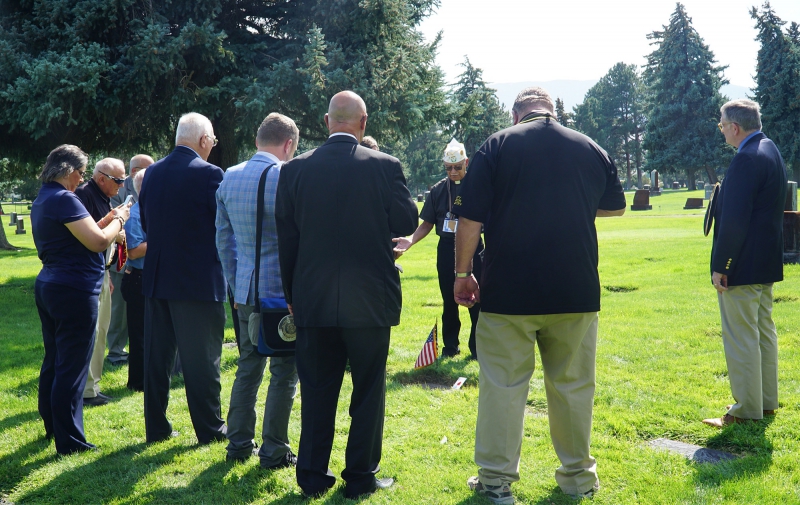 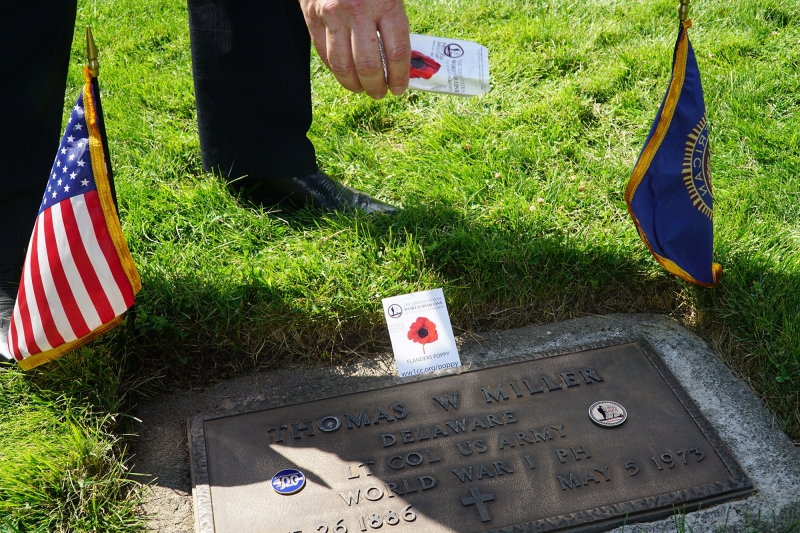 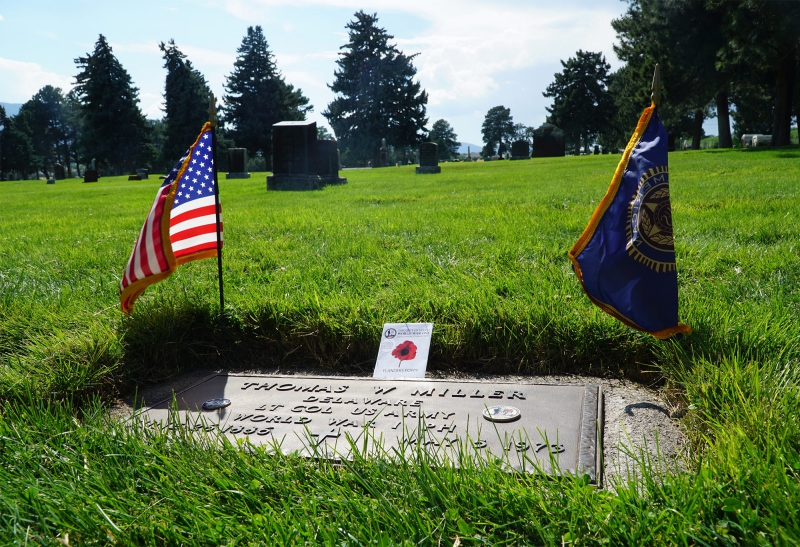 The cleaned and decorated grave of American Legion founder Thomas W. Miller in the Masonic Memorial Gardens and Mausoleum in Reno, Nev.