The U.S. World War I Centennial Commission has allied with the American Legion, and with the Gilder Lehrman Institute of American History (GLI), to produce a series of programs to teach educators about World War I topics.

Using a $50,000 grant from the American Legion, the Gilder Lehrman Institute will produce World War I-themed "Teaching Literacy through History" seminars in 6 cities throughout the 2017/2018 calendar school year. The Centennial Commission will assist in providing curriculum content, communication support, and other resources.

"Teaching Literacy through History" is a GLI professional development program which presents teachers with literacy skills and tools for using primary sources in the classroom that directly benefit student understanding and performance. For these seminars, teachers will work with eminent historians to deepen their knowledge of World War I, and will leave the sessions with classroom‐ready lesson plans and resources on World War I, to take back to their schools.

For these seminars, teachers will work with eminent historians to deepen their knowledge of World War I, and will leave the sessions with classroom‐ready lesson plans and resources on World War I, to take back to their schools.
The goal of the program is to help teachers across the country to engage their students on the causes, the human aspects, the results, and the ultimate lessons from World War I, in order to bring the era to life. 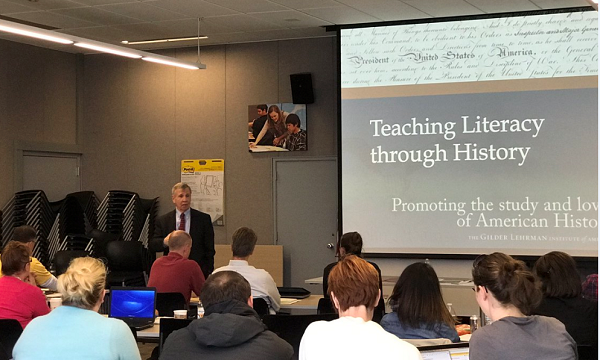 Robert Dalessandro, Chair of the U.S. World War I Centennial Commission expressed enthusiasm for the program. "This effort is right up our alley. Our Commission's main mission is to increase public awareness and public education about American involvement in World War I. The "Teaching Literacy through History" program does exactly that, and contributes directly to our outreach efforts".

Tim Bailey, Director of Education at the Gilder Lehman Institute agreed. "This program creates a wonderful opportunity for educators to interact with leading World War I scholars, engage with their colleagues in learning innovative teaching strategies and come away with not only a better understanding of the important role of WWI in our culture but how to effectively communicate that to their students."

Commissioner John Monahan, a Centennial Commission member appointed by the American Legion, and Treasurer of the American Legion Charities, also expressed support. "The American Legion was formed by veterans who served during World War I, so it's in tribute to our founders and the cause for which they fought, to share with new generations the story of this world-changing time in history. To bring understanding of the war and its effects - to explore where we have come and continue to go as a result of U.S. entry - is a mission that the American Legion is proud to support."

The U.S. World War I Centennial Commission is a Congressional Commission created in 2013 to provide public outreach, education programs, and commemoration events for the American involvement in the war. The Commission operates through private donation, and their founding sponsor is the Pritzker Military Museum & Library in Chicago, IL.

Information about the U.S. World War I Centennial Commission can be found at ww1cc.org.

Information about the Gilder Lehman Institute can be found at www.gilderlehrman.org.

Information about the American Legion can be found at www.legion.org

Information about the Pritzker Military Museum & Library can be found at www.pritzkermilitary.org