Council of National Defense: a little-known or appreciated WWI agency

Among the wonderful sources at the National Archives for the study of World War I are the records of the Council of National Defense (Record Group 62). This Council touched the lives of every American, whether they realized it or not. The records, contained within one thousand boxes, provide a wealth of information about gearing up for war and about the home front during the war, particularly efforts for the mobilization of industries, resources, and the people of the United States for the effective conduct of the war. 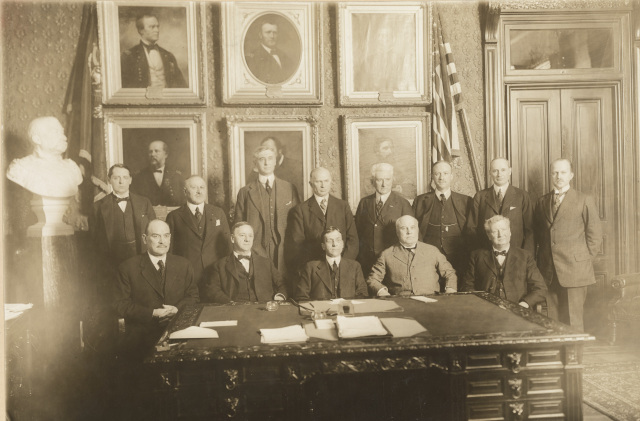 Council of National Defense and Advisory Commission. Seated left to right, Secy. David F. Houston, (Agriculture) Secy. Josephus Daniels (Navy) Secy. Newton d. Baker, (War) Secy. Franklin K. Lane (Interior) Secy. Wm. B. Wilson (Labor), Standing: Grosvenor B. Clarkson, Secy, Julius Rosenwald, Bernard N. Baruch, Daniel Willard, Dr. F.H. Martin, Dr. Hollis Godfrey, Howard E. Coffin and W. S. Gifford, Director.The Council of National Defense was established by section 2 of the Army Appropriation Act of August 29, 1916 (39 Stat. 649), to coordinate industries and resources for the national security and welfare. The Council was to investigate and make recommendations regarding the availability, production, and increase of war supplies and transportation. It was the first of the large emergency Government agencies of World War I and became, in turn, the parent organization of most of the other special war agencies. The Council and an Advisory Commission, to be nominated later, were headed by a Chairman, and the administrative duties were exercised by a Director and a secretary.

The Council had its first meeting on December 6, 1916. The Council nominated to the President for appointment to an Advisory Commission seven persons, “each of whom shall have special knowledge of some industry, public utility, or the development of some natural resource, or be otherwise specifically qualified.” The Advisory Commission was to advise and assist the Council in the execution of its functions and to create relations that would render possible the immediate concentration and utilization of the resources of the Nation.